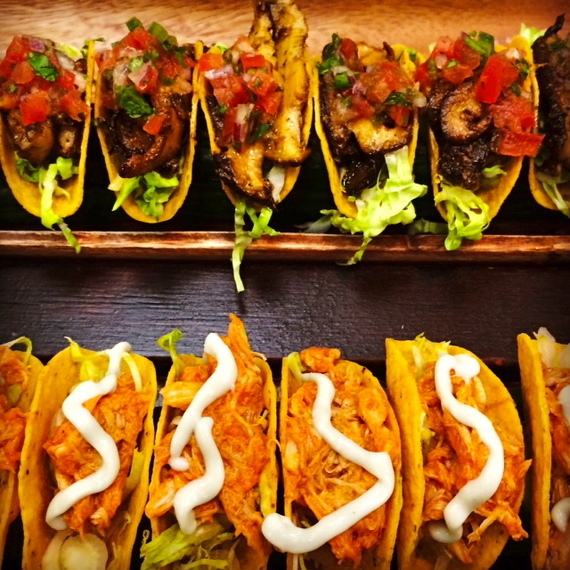 A lot of folks ask, "Chef Rossi, why did you become a caterer?"

I have three answers.

The first answer: I was a bartender in another life, one of those old-school bartenders ... like in the TV show "Cheers." I had a following who came in for my bubbling personality and the fact that I bought back every 3rd or 4th round. The same 20 to 30 people came in every day. I knew everyone's name, knew what they drank, knew a whole lot more about their personal life than I wanted to know and knew that at 11 p.m. after the cook left for the night, I'd have a room full of boozers getting drunker by the minute, since there was nothing to soak up the sauce but Pepperidge Farm cheddar goldfish. I mean, yeah, they're addictive, but you can only eat so many cheese fish.

One night, when my regular Nick (the ex-hippie-turned-dealer) nodded off at the bar, I went into the kitchen in search of a snack to sober him up. We always had tortilla chips, but I wanted something more. Digging around the walk-in refrigerator, I snagged some leftover mozzarella from the mozzarella sticks and some marinara sauce used for the dip. I laid out a pile of corn chips on a baking pan, mixed the marinara with a little Tabasco, drizzled it over the chips, covered that with mozzarella, topped that with sliced olives and shoved it in the broiler.

Out came wacky but yummy Italian nachos. I served the drunken feast to Nick, who perked up so much he actually was able to enunciate and use complete sentences. The other drunks charged the platter, chanting "FOOD!!!" and the late-night sensation at Trivia bar and grill was born.

Each night, after the cook went home, I would pilfer whatever looked interesting and make the nachos of the night: buffalo chicken nachos, cheeseburger nachos. I started to get a cult following. It's not like there was anything gourmet about a platter of corn chips covered with melted cheese and cut up buffalo wings. But to a drunk, it was heaven. More importantly, it had the most sublime of ingredients. It was free!

I got so jazzed making the nachos of the night that I started to write down ideas during the day for new and different creations; spaghetti and meatball nachos, bacon and Velveeta nachos, tuna melt nachos. (Tuna melt nachos are really good! Try them sometime!)

After about six months, I realized I was way more jazzed about cooking the nachos than trying to tell bad jokes to a room full of alcoholics. It was time for a career change.

This was the 1980s. A woman trying to become a chef was not exactly welcomed. The first chefs I worked for seemed to do nothing but either try to make me quit or try to get me to sleep with them!

I decided they weren't going to break me. For every bad joke, I shouted back a vivid description of a yeast infection.

After years of slaving for misogynist chefs, I became one, too -- a chef, that is, not a misogynist.

Catering suited me way more than restaurant cooking. Working the line in a restaurant was a cruel and torturous ordeal. It's not like catering is any easier, but with catering, the menu is different every time I go to work. It's one big push to get dinner out for the night, then it's easy street. With restaurants, that big push happens again and again over several hours, and it's the same menu every day! We are talking about a twisted combination of high-octane stress and mad boredom! Thank God for the dinner specials! At least I could invent a pasta of the day!

But with catering, I was inventing the whole menu for just one day! High-octane stress but at least it was exciting!

The culinary mesh of my childhood was too strange to be anything but a caterer.

I was raised on the bizarre combination of what I call lowly Orthodox Jewish and white trash.

We were Orthodox Jews, sort of, meaning, we kept the meat and dairy dishes separate but ate the fish sandwich at McDonald's.

I grew up on the Jersey Shore. My dad was a schoolteacher, so we all had the summers and holidays off together. Dad had some kind of wanderlust. I think he wanted to run away from his badly behaved children and kvetching wife. But he kept taking us with him.

Why? Meshuganah. We all were in my house.

My dad picked up an old El Dorado camper that he wedged on top of his yellow Ford pickup truck. He shoved the kids in the camper, his wife in the truck, and off we'd go, driving around the country.

We spent more time in the Deep South than anyone else I knew. By the time I was 10, I had a Southern accent. Luckily it mixed with the Jersey accent, and the two kind of canceled each other out.

My folks would make us stay in whichever of the bungalows wasn't rented for the whole summer. It was 120 degrees in the shade. Between the palmetto bugs as big as mice, the sweltering heat and the holy rollers who came by to convert us by singing songs about Jesus outside our bungalow and banging on tambourines, we weren't exactly on course for summer fun.

But I did fall in love with Southern cooking: buttermilk biscuits with gravy, fried chicken, black-eyed peas, and pecan pie.

I was the only kid I knew who wanted grits and kishka for dinner.

This bizarre combination, matzo balls and collard greens, set me up for a love of wacky food fusions. It was a perfect backdrop to become an alternative wedding caterer in New York City, specializing in multi-ethnic cuisine. Korean bride, Jamaican groom? Send them on over. I got your jerk chicken with mango kimchi right here!

Now here's the third answer to why I became a caterer.

So I wouldn't get arrested.

Yes, you heard me.

My mother instilled in me the lesson that food is love.

You stubbed your toe? Eat some challah! You'll feel better.

Got a bad grade in math class? Eat this Empire Kosher drumstick. You'll do better next time.

By the time I started dating, I was force-feeding everyone who got close to me. The more they ate my food, the more they loved me.

The problem was, I was making everyone around me fat. ... And frightened. They had to break up with me to avoid morbid obesity.

Being a caterer satisfied my need to feed the world. Now I can force-feed hundreds of people a night, and nobody's running away. They're all running toward my buffalo chicken tacos with blue cheese icing! You gotta try it. Seriously yummy.

I'm still a bit of a force-feeder, but my girlfriend and I have an arrangement: I leave her alone so she can control her blood sugar, and she doesn't dial 911. Win-win. 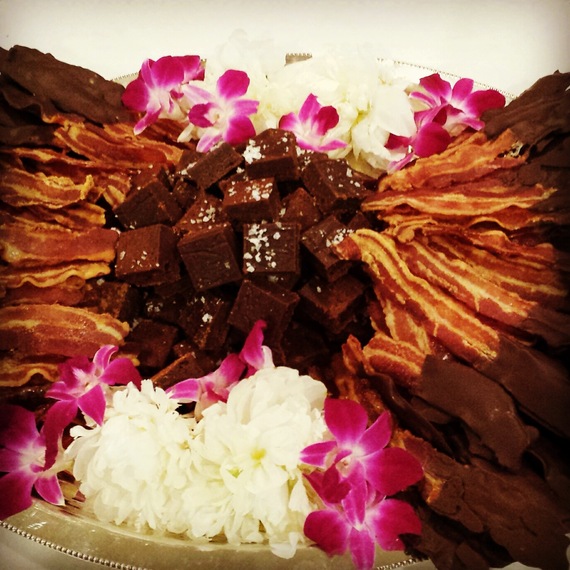