I currently live in a professional sports crazed family. Our television is almost always tuned into a sporting event. In the fall, Saturdays are college game days and Sundays are all about the NFL. March Madness is beyond that in my house and then come the NBA playoffs followed by the draft for next year. The NHL, while not always a favorite, holds its own especially when our hometown team, The Philadelphia Flyers are having a good year. The MLB season seems to last forever and a day, and we still manage to watch the major (and not so major) golf and tennis tournaments.

Do I sound like I know what I'm talking about? I really don't. But I'm trying. My husband is kind of amazed that I now go on ESPN.com fairly regularly and also manage to squeeze in time for SportsCenter.

Full disclosure: There is one and only one reason I have this newfound interest. That reason is my firstborn -- my 12-year-old-son. 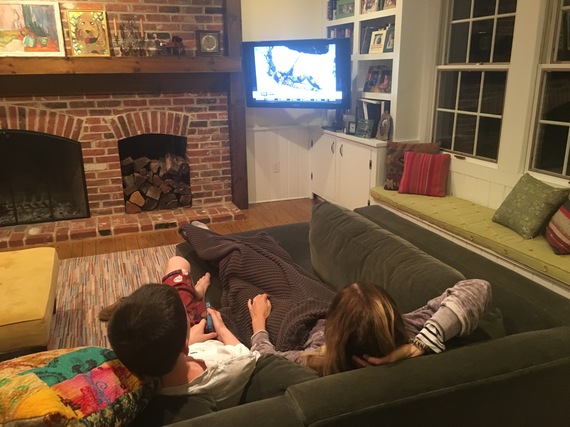 My son was the little kid who never stopped talking to me. He barely paused to take a breath when telling me about the newest additions to his Thomas the Train collection, the big activity at the school playground or what better than his own snack he managed to trade up for at lunch. I listened intently, trying to keep up as best as I could, adding my own input and overly excited reactions when I saw fit. The conversations went on and on and on and on - until they didn't.

Somewhere along the way to his pre-teen years, my son stopped talking to me. It seems he no longer has much to tell me. I'm still there asking the questions and waiting to give the big reactions, but I'm not really getting anything -- at all. He's busy with school, with his friends and with sports and that's all good. I'm happy for him. He's developing his own interests and growing up. It's as it should be. Still I kind of miss the banter we used to share.

My 10-year-old daughter won't stop talking to me. I guess it's the mother/daughter connection that works for us, and as much as I hate to stereotype, we are both cut from the same girly-girl cloth. She tells me each and every detail about her days at school, her group of friends and asks me way too many questions. She wants to know about what I did when I was her age and what I wanted to be back then. She seeks out my opinion on what outfit I think looks best on her and this includes the earrings, which she changes every day. With newly pierced ears, these earrings of hers could fill up an entire evening of conversation.

I take a break from accessory chat with my daughter to look over my son's shoulder in the midst of his silence and see the detailed group texts with his friends about the Philadelphia Eagles' latest trade and their predictions for the Super Bowl. I see his eyes fixated on the television with an unbelievable focus on the commentators' discussion of how the NBA draft lottery will go. Yes these are grown men on TV getting paid to discuss which NBA team will end up picking a certain number which will indicate the order in which that team can pick a player for the next season.

I realize that if I ever want to engage in conversations, real conversations, with my son again, I need to get into his world. And so I do, or at least I try. Feeling a bit like an overly eager desperate want-to-be girlfriend, I start to ask him questions.

"Who's that basketball player? How tall is he? Where'd he go to college? How old is he?

My son answers me right away with more enthusiasm than I've gotten from him in at least a year.

"Mom, he's the best player in the NBA right now. He won the MVP this year, and he set a record for most 3 pointers in a season."

Did he just give me extra information? I want more. Don't stop talking.

I ask more questions. I get more answers. I stop whatever I am doing, sit down on the couch next to him and watch the commentary. He rests his feet on my lap and slowly I see the edges of his lips turn up. He starts to tell me about the big debate at his lunch table that day at school - the one about who is the best NBA player of all time. He knows it's Michael Jordan, but some kids feel it could be LeBron James. I make a mental note to do some research on that topic.

Since then, my son has opened me up to his ever-expanding world of professional sports knowledge. We watch the 30 for 30 documentaries on ESPN together, and I am now actually interested in them. They are so well done, and I like learning about any kind of history - even sports. But what really motivates me to sit and watch with him is the long awaited return of our banter, the end of our silence.

Sometimes we manage to talk about other things besides sports. I've obtained a wealth of knowledge about the NBA and the NFL but also about what's going on in my son's almost teenage head. In between foul shots and time outs, he will tell me a joke that one of his friends told him; he'll share a thought on one of his teachers and he'll express his feeling about attending middle school next year.

I'm thrilled that the proverbial door to our conversations has been opened up, yet I still recognize that it can close at any time. I wonder if my very deliberate foray into his world of sports will last or if he will one day uncover my real motives. I wonder if we will ever share real genuine interests like my daughter and I do.

A couple of weeks, I attended a graduation ceremony of sorts at his beloved elementary school, which was ending (too soon for me) in the 6th grade. I looked at my son's long and lanky body (he was taller than a couple teachers) as he walked by me sitting in the audience. On his way up to the stage, he made eye contact with me, put his left hand on his left ear and then mouthed to me "I like your earrings." I melted. There was my boy -- my sports loving crazed boy who showed in an interest in one of my interests -- albeit earrings. It didn't matter. I was willing to take it for what it was worth. Perhaps the conversation will continue after all?