I have serious issues with the word "miracle." It makes my stomach turn, heart palpitate, and knees weak. When I hear it, it evokes a visceral response -- mostly because of the context in which it is spoken. Someone gazing into the eyes of a precious baby melting with joy, "Oh! What a miracle she is!" Yes, life is a miracle. Life is hard yet fragile, precious, and not promised, but a miracle none the less. Somehow, it takes death to make the sanctity of life even more clear.

"Pray for a miracle and he will be healed."

Those words and many others like it were uttered to me throughout my pregnancy. People around me were convinced that they would see a grand miracle take place before their very eyes. One that would restore their faith and breathe hope back into a broken world. Convinced that my son would be born healed and completely healthy. Until he wasn't.

"Maybe if you prayed harder, he would have lived."

Those words were declaimed to me in riotous indignation after my son's death. Like somehow I had killed him with my lack of faith. Somewhere along the line I became unworthy of a miracle because I didn't pray hard enough. I didn't have enough faith. I didn't believe enough. I was so baffled that someone could actually believe my son's death happened because I didn't pray hard enough. Did they honestly think that was true? More importantly, were they right? Words spoken by a dear friend of mine say it best:

"There is no stronger prayer than that of a mother asking God to spare her baby's life."

When we made the announcement about our son's life limiting condition, I felt that many people brushed over the seriousness of it with words of hope, faith, and prayers for a miracle. I, of course, wanted a miracle to happen. I prayed, I screamed, I begged, and I pleaded for a miracle, but a part of me knew. I just knew that he wasn't going to be healed no matter how much I wanted it. No matter how much I prayed for it, medical reality hung over me like a dark cloud. It cast shadows upon my hopes, my heart, and upon my faith.

After a while, prayers and hopes of healing turned into simple prayers. Prayers that graciously asked for what we wanted most -- time. Prayers that acknowledged the inevitable, but still begged and bargained for days, hours, even minutes of time. I prayed that we could hold him in our arms alive. That in itself would be a miracle to us. That was the miracle and the hope that I began to ferociously cling to.

Miracles happen every single day. They just may not be the miracle you had hoped or prayed for. How hard or how much you pray doesn't determine if you are granted a specific miracle. Because if the strongest prayer is that of a mother asking for her child's life to be spared -- there wouldn't be such a thing as a grieving mother. Our babies would outlive us all. And we would never know this anguish.

Some may think that a miracle didn't happen for my family, but it did. My son was and is the miracle. Because even in death his life continues to manifest such power and such hope. Beyond anything that I alone could explain. The lives he has touched, the impact he has left -- it is all pretty miraculous to me. How one tiny little baby, who never took a breath, could reach the hearts of others and speak to them in a hundred different ways is nothing short of a miracle. Not exactly the miracle everyone had in mind. But I now know that there are different kinds of miracles. Little ones that present themselves in unexpected ways. We just have to be able to see them through the disappointment of not getting the miracle we wanted more. I had to rid myself of the false idea that miracles only come in grand gestures of divine intervention. Because sometimes miracles dwell even where there are crushed hopes and dreams and those are the ones that are so incredibly hard to see.

Even after enduring the loss of my son, I still believe in miracles. Just not the way I did before. Instead, I look for the miracles others don't see. The ones that are graciously placed in front of me every day that others wouldn't give a second thought to because they aren't big enough or grand enough to be recognized. The ones people typically don't see because they are far different from their idea of a miracle.

When I was pregnant, a silly little fortune cookie told me, "Believe in miracles." So I did. I just wish I would have known what it really meant. Because my miracle came beautifully wrapped up in a feeble baby boy who fit perfectly in my arms. He was tiny and his life so very brief. But he is no less a miracle. He is my miracle. And I will never stop believing in the power and hope that continues to manifests in his life. 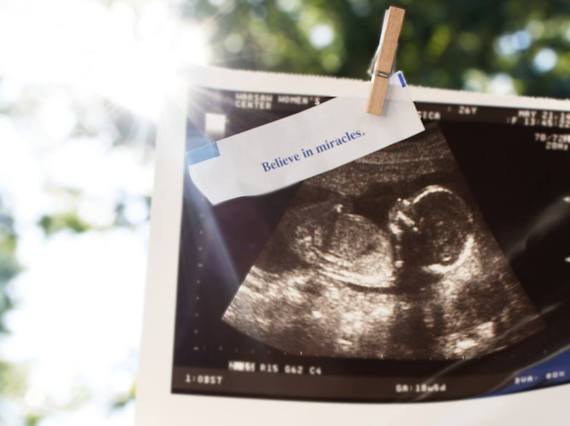 This post originally appeared on All That Love Can Do --support for families who continue their pregnancies after a fatal diagnosis. Find Jessi on Facebook, Instagram, or at Luminous Light Studio

Wife, mother to one on earth and three she carries in her heart, artist, student, writer, and founder of Luminous Light Studio.