I have never used marijuana, and I don't plan to start. I certainly don't want more kids to use marijuana. Because of this, I support legalizing and regulating marijuana like tobacco and alcohol. Not only do I support legalization, I changed careers to advocate for it full-time. Here's why:

We can control youth marijuana use more effectively through legal regulation than through prohibition. Legalization may sound scary, but it means removing the marijuana market from our streets and schools and putting it in licensed, regulated stores. At the same time, legalization would prevent thousands of gang and cartel killings and stop hundreds of thousands of racially discriminatory, career-destroying arrests every year. It's easy to be okay with the status quo if you're part of the privileged population mostly unaffected by these impacts, but it's completely intolerable for the communities losing their children and their livelihoods to marijuana prohibition. 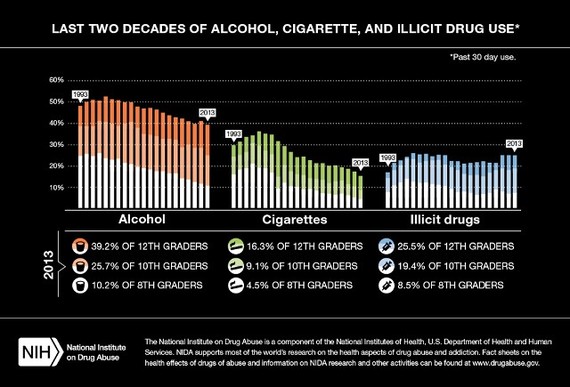 I believe that legal regulation of marijuana would be better for kids, because it would allow us to control marijuana potency, prevent sales to kids and replicate our success with cigarettes. Legalization may sound scary, but it simply means taking the marijuana market out of our streets and schools and putting it in licensed, regulated stores.

Some people want to wait to expand legalization until we have seen exhaustive studies on the impact of legalization already underway in Colorado and Washington. (Preliminary data shows that youth marijuana use has decreased in Colorado since legalization began. )

But we cannot afford to wait, for two main reasons. First, legalization would prevent thousands of gang and cartel killings every year. Second, it would stop hundreds of thousands of racially discriminatory, career-destroying arrests. It's easy to be okay with the status quo if you're part of the privileged population mostly unaffected by these impacts, but it's completely intolerable for the communities losing their children and their livelihoods to marijuana prohibition.

According to the White House, American consumers spend $34 billion on marijuana every year, just over $1,000 per second. Outside of Colorado and Washington, where marijuana sales are legal, this money goes straight to drug dealers. Billions go to Mexican drug cartels that grow, import and distribute marijuana to dealers in the US. According to FBI and DEA officials, marijuana is the cartels' primary source of income. Since 2006, when the Mexican government sent its military into the streets to fight them, the cartels have been using this money to wage actual war, assassinating mayors and journalists, massacring civilians at funerals and killing more than 10,000 people every year.

Billions of dollars more end up in the pockets of drug-dealing street gangs, whose turf wars kill thousands of young people every year on the streets of our cities. Drug- and gang-related violence claimed roughly 3,000 lives in the U.S. in 2012, ten times more than our death toll in Afghanistan and 35 times more than in all the mass shootings like Sandy Hook that year. We all abhor drug cartels and gangs, yet today we resign ourselves not only to living with them but also to providing the funding they need to buy influence, machine guns, bombs and grenades.

We don't have to fund them. In the 1920s, alcohol prohibition caused Al Capone and other gangsters to fight over the lucrative alcohol market, engulfing our cities in violence. Instead of resigning ourselves to alcohol gangs, we ended alcohol prohibition. With no more illegal alcohol-dealing turf to fight over and no more alcohol money to fund them, the gangs mostly disappeared. The single most effective action we can take to stop today's violence and save thousands of American and Mexican lives every year is to legalize marijuana.

The other reason we can't wait is the civil rights crisis of racially discriminatory drug arrests. Today, more people are arrested for marijuana than for any other crime, with over 750,000 arrests in 2012. Every one of those 750,000 people can be discriminated against in housing or employment because of this arrest, regardless of whether they were guilty or innocent. If convicted, in most states they will lose their driver's license, college loans, unemployment assistance, food stamps and public housing. If they then become homeless, social services can take away their children. They are now legal second-class citizens, ineligible to vote, serve on a jury or in the military, earn a professional license or adopt a child.

Even though I don't use marijuana, I know plenty of people who use and some who have sold marijuana. Yet I don't know a single person who has faced second-class citizenship by being arrested for marijuana possession. How is this possible?

The reason is that I am a middle-class white person. Government arrest data shows that black people are five times more likely than white people to be arrested for marijuana possession. This is not because black people use marijuana at higher rates than whites do. If anything, black people are less likely to use marijuana--every government survey for the past decade reports a slightly higher percentage of whites used marijuana in the past year. There is also no significant difference in drug dealing rates between youth of different races or income levels.

So why the difference in arrest rates? Police make marijuana arrests almost exclusively in low-income black communities, not affluent white communities. Black teenagers in Harlem get frisked for drugs constantly. A few blocks away at Columbia University, white college students do not. Police on college campuses and in affluent areas overlook marijuana possession or refer it to college administrations rather than arresting students. If the police enforced the laws evenly, I would almost certainly have friends who had been arrested for marijuana.

Unequal enforcement might seem like a minor problem, but it is so widespread that it has an overwhelming impact upon low-income minority communities. Thirty percent of all black males are arrested by age 18 and 49% are arrested by age 23. In Baltimore and Washington, D.C., over half the population of young black males is currently in prison, in jail, on probation or on parole. Legalizing marijuana is the single most powerful action we can take to stop the mass criminalization of America's black population.

The most important step we can take is to talk to our friends about marijuana legalization, because many of us will be voting on this issue soon. Since state and federal politicians still worry about being labeled as "pro-marijuana," they hesitate to propose or vote for legislation. Instead, marijuana will probably be legalized one state at a time by people like us voting on ballot initiatives. Even though 58% of the American population supports marijuana legalization, many people assume that those of us who speak out against marijuana prohibition must use marijuana or at least think it's harmless. To end those misconceptions, more of us nonsmokers need to speak out.

Try these lines out on friends and family:

This year truly is a turning point in the marijuana debate. The Obama administration has promised not to interfere with legalization in Colorado and Washington. The Republican-controlled House of Representatives has voted on five separate occasions to support states' rights to set their own marijuana policies. The New York Times just came out in favor of legalization with an unprecedented six-part editorial series. In our virulently divided political environment, marijuana legalization has gained support across the political spectrum from Democrats, Republicans, Independents, civil rights groups, libertarian conservatives, and organizations of mothers, law enforcement officers, students, and families of the incarcerated. Join us today by talking to those around you, sharing this article and volunteering your time and talents to end prohibition now.