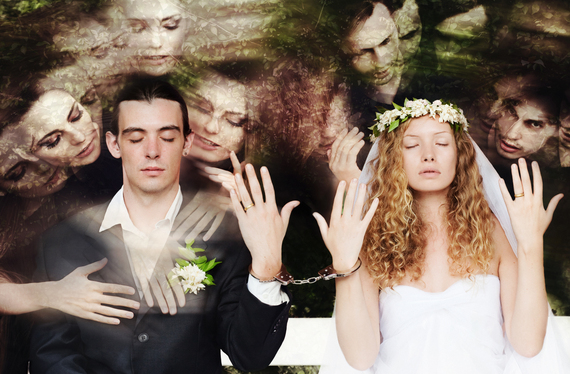 Where I live there are two common (among a few not-so-common) faults for grounds of an Absolute Divorce. They are physical abuse and adultery. Cheating on your spouse is viewed by our judicial system (and oftentimes by society) as something as terrible beating him or her. Now, I'm not saying that an affair does not leave serious emotional scars which may potentially rival the physical scars that result from abuse, but so do a number of other things one person can do to another over the course of a marriage.

Infidelity As The Ultimate Betrayal

More than anything it seems as though the problem people have with cheaters is their betrayal, as opposed to the actual act of the sex itself. It's the lying, sneaking around, the fact that they've done something they know will hurt their significant other, and their broken promise that causes outrage. For the record, there are plenty of ways one can betray one's spouse without cheating on him or her.

So, why is cheating the "ultimate" betrayal? Because sex is placed on such a pedestal. We have been taught that sex is this incredible, special, meaningful act that is only meant for people who love each other. This is where our sex education, religious teachings, and promises of monogamy have failed us. Because yes, sex can be all of those things with the person we love. But it doesn't have to be only those things. Sex can also just be sex. It can just be a thing we do, like washing our car or reading a book (albeit a bit more enjoyable!).

It is not possible for any one person to meet every single need of another. Sex aside, you see this truth in practice in many other facets of romantic relationships. I am not a fan of working in a shop on cars all day long (in fact, I'd rather scrub my entire kitchen floor with a toothbrush), but it's something my partner really enjoys, so he does that with his car buddies. Sometimes I need a good philosophical conversation, and that's not his cup of tea, so I have friends who will engage in these types of conversations with me instead.

Why should sex be any different? There are things that I want out of my sex life that he, through no fault of his own, is not capable of providing. And the same is true of me for him. Why wouldn't we seek to have those needs met elsewhere?

I would much rather my partner show me that he loves me by treating me with respect, by making me laugh, by working towards our agreed upon goals, by communicating with me even though I know its difficult for him, or by being there for me in a time of need, than by promising to forsake all others as long as he lives. That would be like me forcing him to work on cars with nobody but me even though I suck at, would be of no real assistance, and don't enjoy it. Neither of us would be getting what we need or want in that scenario.

Promising each other to NEVER do something which we are biologically programmed for (i.e. have sex with people we find attractive) does not make me more confident in our relationship. On the flip side, promising that we will be honest with each other when either of us feels like something is missing in our sex life (or any other aspect of our relationship, for that matter) and discussing it together to come to a solution that works for us both, that makes me happy. That strengthens the trust I have in our relationship. That gives me the confidence I need in order to commit myself to him.

Numbers are tricky surrounding this topic, (because who really wants to admit that they have had an affair?!), but I've heard statistics stating that anywhere from 40-74% of marriages have been touched by infidelity at one time or another. Even at forty percent, that's a large number of people who's partners have been unfaithful. That being said, is it possible that the problem is not the cheater or their partner? Is it possible that the problem is in the beliefs we hold regarding monogamy and the unrealistic expectations we place on our relationships?

Non-monogamy (or even simply forgiving infidelity) is not easy, nor it it something everyone is capable of. I totally get that. But just a slight shift in ideals may help many of us find healthier, happier, more satisfying relationships. And in the end, isn't that what most of us are in search of anyway?

More:
divorcenon monogamycheatingInfidelityopen relationships
Newsletter Sign Up
A weekly guide to improving all of the relationships in your life
Subscribe to HuffPost’s relationships email
Successfully Subscribed!
Realness delivered to your inbox