I am an annoying friend. I am the person that gets unfollowed on Facebook and that people avoid mentioning certain topics around. I am the friend constantly sharing petition and calls to action, political articles and news stories. At parties, I am the one that shouts at friends to go vote, and lectures siblings when they don't update their voter registration address. I talk incessantly about the importance of staying informed and being involved, even when those I am talking to are lamenting their frustration at those very things. I spend Saturday mornings debating with my partner whether voting matters, how any elected leader can be worthy of our support, whether the Chicago/Illinois/American populace really is too apathetic or unintelligent to deserve anything better than the leadership and policies we have.

In my better moments, at my most positive, I am encouraging and hopefu l -- deeming fellow advocates "Superheroes" and assuring people that the grassroots organizing work on voter registration, getting out the vote, and policy issues such as overturning Citizens United are all signs that true democratic participation is still possible, and that perhaps even progress might be made. In my more defeated moments, I want to quit. I want to turn away and admit to my more cynical friends that they are right. That no matter what we do it won't matter, our system is broken beyond repair and we should all just have as much fun as possible before the world goes up in flames. I want to stop participating.

Then, inevitably, my partner will ask me how much it really matters whether he or anyone else shows up to the polls for the Chicago mayoral and aldermanic elections. Or three separate friends approach me for advice on where to find information on the candidates or how to get another non-voting friend to the polls, and I am participating still.

I wasn't born this way. In high school and college, and even a bit after, I acted under the assumption many people do -- that politics is corrupt, the system is broken, our voices and votes don't matter. The first Presidential election I was eligible to vote in was 2004. A year and a half prior, two of my new friends from my college dorm floor had been shipped out to Iraq, and my motivation for voting in 2004 was a direct result of the night my other friends and I hugged them goodbye and went sobbing back to our rooms. I wanted my friends, back, I wanted no one else to have to go to fight a war many of us did not understand or support. On election night 2004, I watched the votes roll in, and over the course of the evening my roommates' and my hearts sank deeper and deeper. It was not a promising start to my voting life.

After that, I don't remember paying much attention. I still voted, and I did get swept up in the excitement of the 2008 election. I celebrated with countless others in Chicago, watching Barack Obama give his victory speech from my precarious perch atop a garbage can in Grant Park. It felt exciting and historic and far more inspiring than the previous Presidential election... and then it was back to business as usual.

It wasn't until 2010 that I became what I am now. In 2010, I went to Washington, D.C. for the first time. I had that year, as part of my work as a nonprofit consultant, begun designing and conducting advocacy trainings and coordinating lobby day activities as part of HealthConnect One's annual conference for community-based doula and breastfeeding peer counselor sites. I spent the weeks leading up to March 11, 2010 assisting registrants, setting up meetings with elected officials' staff, and creating materials for legislative packets. Much attention was paid to our "ask" -- the passage of and inclusion in health reform.

Then, after weeks of work I found myself following my colleagues through the halls of the Hart Senate Office Building, being greeted by a staffer who looked to be about my age in Senator Durbin's office. Behind the front desk were shelves displaying football helmets from many of the major Illinois college teams, and I smiled at the familiar black helmet bearing the Northern Illinois University Huskies logo. We were ushered into a small meeting room in which I watched my colleagues speak about the importance and impact of community-based doulas and their role in health care. I listened as my boss related their work to the larger health system and noted our support for the passage of health reform. I saw Senator Durbin's staff respond with interest and encouragement, and provide practical recommendations for action to further support for the program. Once the business part of the conversation was out the way, I watched these remarkable women, my colleagues and a member of a Senator's staff, compliment each other's style, check in about families, and swap vacation stories. Like real people. Then, I saw the same thing again and again, in office after office, and I left Washington, D.C. an excited, energized, advocate.

Health Reform, a the time dubbed the Patient Protection and Affordable Care Act, was signed on March 23, 2010. I'm not saying it was just because of us, but we helped. Community-based doulas and mothers and families and one awestruck cynic told their stories and raised their voices, and were heard. 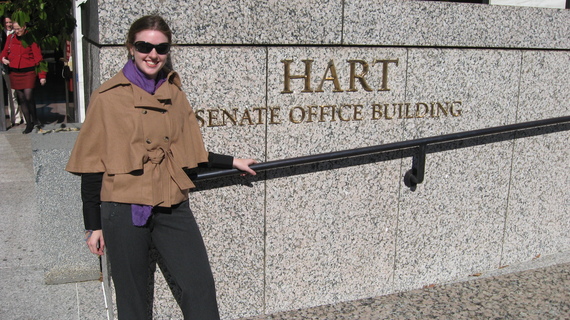 I have been back to D.C. several times and to a couple of state capitals for similar work. Not every visit leads to a landmark victory, not every visit leads to any sort of victory at all, but some do. Even in those that don't, I have seen people who started out like I did leave the way I left. People who had never even sent a form email leave with plans for their Representative to visit their site, and more meetings with other staff scheduled. They walk in nervous and unsure, and walk out empowered and determined.

Of course, when you are conducting legislative visits as part of a group of 40 people, it is easier to pick up energy and have a positive experience. It's very different in a long line at an overcrowded polling place in the dead of a Chicago winter. Add to that navigating Chicago traffic and trying to work an extra trip into an already busy day, and I understand why someone would balk at the extra effort to cast a ballot for a race that could seem to to have only one plausible outcome anyway.

I know that much of our current political system is broken; that there are so many problems facing us as a city, a state, a nation, that it can be so overwhelming the option appears to be to turn away, in the interest of self-preservation. I know that at times, the more invested and involved someone becomes, the more infuriating it becomes when when other are not, the more heartbreaking the disappointments are.

I agree with everyone who says all of that to me when I get on my voting soapbox. I understand why friends ask me how I can believe there is hope for such a soul-crushing system, how I can honestly believe any of our voices matter.

My answer is: because I've seen them matter. I have seen what happens when people come together and support each other in demanding more from their leaders. I see people everyday working to make our city, state, country better. Dedicated people, working diligently to get money out of politics, voter rights restored and protected, working every day to make the lives of people they have never met, better. I see people every day who, no matter how many defeats they experience, get up and keep moving. I believe I owe them my vote. I owe them my participation.

And so do you. 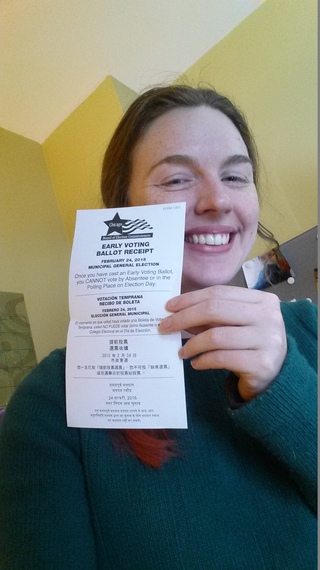 It's election day in Chicago. Find your polling place here.