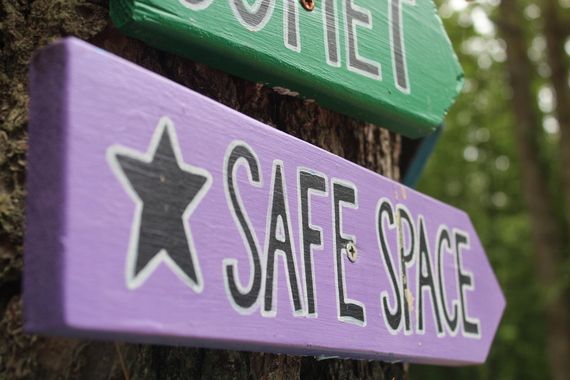 Around my wrist hangs a clear pink plastic bracelet. It holds a mix of glitter and tap water, a simple and unremarkable combination that, typically, would never have been something that I would remember or treasure. This bracelet, however, is different.

It was given to me by a friend of mine, a friend with short blonde hair and bright blue eyes, a friend whose shirt is usually on backwards or inside out, a friend with a contagious laugh, a mischievous smile and a tendency to charm every person he encounters. My friend who I met when I was given the incredible opportunity to work at a summer camp for kids with behavioral, emotional and learning challenges.

When I first accepted a job at Camp Starfish, a 1:1 residential summer camp in Rindge, New Hampshire, I was absolutely terrified. Not only did I not know what to expect in terms of the day to day experience of working at a summer camp for kids with behavioral needs, I also was unsure if I had made the right decision in terms of my career and future. I was going into the summer before my junior year at a competitive liberal arts college and it seemed to me that everyone around me was accepting internships at companies with names that evoked awe and respect from the people around them. I was concerned that I was somehow failing myself by choosing a job at a summer camp, worried that by working in the woods for three months, I would be giving up any chance of progress or growth.

I could not have been more wrong.

Almost immediately, opportunities for progress and growth presented themselves to me. Whether figuring out how to explain directions to a camper in a way they could understand, inventing a new game on the spot to keep a group of 8 year olds engaged and entertained or having a difficult conversation with someone who was struggling, I was constantly being pushed and stretched. Learning happened consistently and in ways I never expected. My ability to communicate began to change. Working with people of all ages with a wide variety of learning styles and skills, I found I had to become more observant and self-aware. I had to see others perspectives and learn to pay attention to things I never would have noticed otherwise. A camper that appeared upset without reason often was simply unable to explain to me that he did not like the way the tag on the back of his shirt felt on his neck. A counselor who approached a problem a different way than me might simply have information that I didn't have. It was my job to pay attention, to ask the questions and to stay open and flexible to the idea that what worked for me might be different than the thing that could help someone else.

There were many days when I became frustrated. Living in the woods away from technology and air conditioning can be difficult in all circumstances, not to mention when you are faced with the challenging task of helping out small friends who do not always know how to explain what they need or want. There were many times I was concerned that I was not capable of working the long hours or staying patient in tough situations.

Every time, however, I proved to myself that I was. And more importantly, that the good moments consistently outweighed the bad ones.

By the end of my first summer at Camp Starfish, I returned to school a better version of myself than I had ever been. I was full to the brim with stories of silly things kids had said or done, inspired by the imaginations and resiliency of those who I had cared for and worked alongside with and newly confident in my ability to problem solve and work through tough situations.

Unlike many of my friends who had spent their summers in prestigious internships, I felt a tangible satisfaction from my three months of work that carried me through my entire year and inspired me to return to camp for a second summer.

The children I work with are absolutely incredible. Many have experienced extremely difficult things in their lives and still, they manage to do what kids do best -- be wild, wonderful, weird, playful, creative kids. They've taught me about choosing joy over hardship, about embracing my own silliness, about how to work on things I needed to work on to in order to become the person I want to be.

And most of all, perhaps, they've taught me to treasure the magic of small moments.

To let go of the idea of prestige or status and dress up in a ridiculous outfit and dance around, to sing songs about bananas and moose and a worm named Herman, to cheer for the other team even when I really wanted to win, to remember to laugh when something is funny, even if I have been angry for most of the day.

They've taught me to stop and pay attention.

So that now, even on the hard days, all I have to do is catch a glimpse of a pink plastic bracelet to be reminded of why I am glad I spend my summers at camp. Resumes and recommendations remain important, and the skills I gained from this job will certainly help me in my future career in ways I never could have imagined. However there is little I treasure more than the reminder on my wrist that for me, and a certain small someone, my decision to choose the unexpected and less glamorous path, ended up making all the difference.

And that, as my camp friends tell me, is what it is truly all about.

If you or someone you know are interested in working at Camp Starfish, please visit this link.