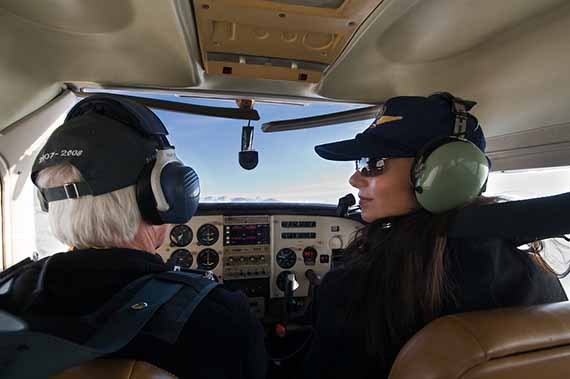 No, it wasn't because we suddenly were flooded with students who wanted to learn how to fly but not how to land.

We didn't get any of those, actually. I had a small flight school using light single and twin propeller-driven aircraft. There weren't any 747 (large jet) simulators among our equipment.

My joy in learning to fly, and my past classroom teaching experience led me to become a certified flight instructor and eventually start my own flight school.

Relationships with students was always a matter of trust. First they needed to learn to trust in my knowledge and ability to effectively teach them aviation principles and how to fly safely. Next, I needed to determine that they were learning properly and that I could trust them to take their first solo and progress further in their endeavor. Safety was always the first concern.

Our students were either local folks who wanted to fly for fun or to pursue aviation careers or they came from other countries to enjoy Santa Barbara while learning to fly. Because our area was such a pleasant place to spend time and because it was less costly to fly in the USA than anywhere else, we often had young people from other countries enrolled in our courses.

In order to make it easier for foreigners to earn their flight certificates with us, I had applied for and received visa issuing authority.

It was a simple process for men or women to obtain a visa which allowed them to be in the US for a specific amount of time while enrolled. My staff and I enjoyed getting to know these folks and enjoyed introducing them to aviation and our area.

After 9/11, perhaps as a coincidence, some people who had applied for and received visas which specified when they were to arrive did not show up at our school.

That was unusual. In order to prevent this, I had always charged a few hundred dollars as a condition of issuing the permit. This money was theirs to use in their flight training. In the past, this screened out the people who just wanted a free pass to America. No longer was that a deterrent.

After several men and women again failed to appear, I became alarmed. I don't know what happened to those people for sure but I imagine that they arrived in the US as scheduled but then pursued other activities. I called and wrote several times to the INS and informed them of this situation. I don't know why I never heard back!

I did know that I wasn't comfortable with helping people come to our country who then disappeared.

Therefore, I cancelled my visa issuing authority. These incidents were to eventually diminish my interest and enthusiasm for what I was doing.

Airports had been my fun places. Of course the airlines' portions of airports had always been very secure but after 9/11 the general aviation sections of any airport that contained airline activity were suddenly surrounded by fences with locked gates. We had to screen people who came to our door and not allow them onto the ramp where the planes were parked unless we could ascertain their identities and purpose in visiting the area.

Trust was gone. It just wasn't fun anymore.  Our student enrollment decreased and we reduced our fleet of airplanes.

Finally, after having started and successfully operated my flight school for nineteen years, I made the difficult decision to shut it down.

Do you think I made the right decision? Have you had to make a difficult decision in your small business?