Twelve years ago, during a round of court appearances initiated by my former-spouse (post-divorce to reduce child support), my attorney told me that in all the years of practicing family law he'd never come across a worse father. With that statement he confirmed what I hoped was just my can't-sleep, middle-of-the-night-crazy-thinking.

He wasn't physically abusive, but abject indifference can hurt more than being struck. A court-appointed psychologist was assigned to the case to interview the girls, especially my oldest daughter, as the visitation schedule was going to be modified. The report the psychologist presented to the court was sealed and not available to their father or me, but the judge's decision certainly reflected the findings: my oldest daughter (she was 14 at the time) could decide if or when she wanted to see her father and my younger daughter (11-years-old) could visit only when her older sister was with her for emotional support. It was an astonishing decision given that this judge generally ruled that equal time is spent with both parents. He also ordered the girls' dad to complete a parenting education program before any visitation would even be considered.

He never complied with the court order, but would occasionally call the girls and each time he did I saw hope on their faces for a better relationship with him. I've read that a father sets the stage for a girl's future relationship choices and that frightening thought, and the constant hurt I witnessed, kept the girls in family therapy for years. As I sat in their therapist's waiting room and braced myself for the red faces and swollen eyes of my daughters (not always, but a lot) after their session, my thoughts were less than charitable.

I thought about his demise. If he were dead the hurt would stop. I could systematically build him up -- make him better -- create a complex character who loved his daughters, but was incapable of showing it, and alas, tragically, time ran out. Romanticize their dad and tuck him away in a drawer all warm and cozy. Let them move forward without the constant confirmation that he just didn't care. If he were dead he couldn't (instead of simply didn't) call on their birthday or Christmas, show up for their softball games, or college graduation.

I shook my head when I heard my divorced friends lament the time their children spent with their fathers. I would've given just about anything to have their problems. Get over it, I thought. Those dads wanted time with their kids.

Recently my 26-year-old daughter called. She was crying and it was hard to understand, but I didn't need the details. The palpable pain in her voice was one I'd heard for years. I knew the source. Her father remarried shortly after the divorce and had three sons. This year he was taking them skiing for the holiday and shared that information during one of their infrequent conversations. He also didn't call on Christmas. She forwarded me the screen shot of a text conversation with her father. 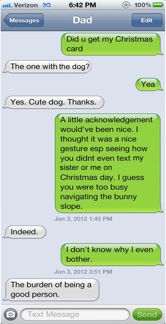 After reading the texts I was rocketed back to a place I thought I'd put behind me and my first thought was, I wish he were dead. In the animal world a mother will fight to the death to protect her offspring. Many times the father is the attacker. This was an assault and although I wanted to bolt to the airport and fly to his city -- my rational self got a grip. What in the world did I think that would accomplish? But, what this incident confirmed is that my instinctual need to protect the girls is a powerful and primal force. One that does not diminish, no matter how old they get. As much as I've looked forward to this time when my daughters are adults and my constant worrying stops, it is still there, just covered up with a thin blanket of "my work is done now."

After sharing my daughter's experience with a friend, she suggested that the girls have a ceremonial death. They should write down all of the hurtful memories that are related to their father -- pages and pages of pain -- light them on fire and then place the ashes in an urn. They should metaphorically grieve his death and let the healing begin.

I'm not sure if that solution will change anything. I hoped by now for something more tangible like an adult relationship with their dad where they could accept him for who he is and get on with their lives. But, I am willing to suggest it.

More:
divorceLife After Divorceex-husband
Newsletter Sign Up
An essential daily guide to achieving the good life
Subscribe to our lifestyle email.
Successfully Subscribed!
Realness delivered to your inbox