Marta Fuchs is the author of Legacy of Rescue: A Daughter's Tribute

"That was the most positive Holocaust presentation I've ever been to!"

I am a member of a generation that wasn't supposed to have been born, living proof that Hitler's Final Solution to whatever Questions he had about the Jewish people didn't succeed completely. I am also the grateful daughter of loving parents whose sense of optimism and belief in people miraculously prevailed despite it all.

"How can you write such an uplifting Holocaust book? How can you speak so positively about what happened, given what happened?" How could I not, I reply. I'm filled with gratitude for my parents' love and protection; for giving me a sense of family connection and continuity by telling me about life and people before; for recounting the sorrowful details of their Holocaust past while also honoring the individuals who showed them human kindness in those abandoned days.

Born in Hungary after the war into the remnants of the once thriving Tokaj Jewish community, my brother and I as children only knew the bare outlines of what happened to our parents. When we came across old sepia photographs of people we didn't recognize, Mom and Dad explained with just one word: elpusztultak, they perished. The "sz" in Hungarian equivalent to an "s" in English, to my child's ear it sounded like poof! They vanished. How can people simply disappear without a trace, I wondered?

Dad never even considered himself a Holocaust survivor. "I was only in labor camp. It's your mother who is the survivor." We knew that Mom and her sisters had been in some terrible place called Auschwitz where someone named Mengele decided we would never know our grandparents. We knew that Dad was the sole survivor of his family. His older brother, two older sisters, and all their six children also "remained in Auschwitz."

It would be three decades later in America that we started asking. Until then, there was a conspiracy of silence, borne from kindness and necessity, each generation protecting the other by not talking and moving forward. After all, they had to rebuild their lives from nothing, and not once but twice, first after liberation in 1945, and then again after we escaped in the wake of the 1956 Hungarian Revolution.

In their Auschwitz barrack a few hours after arrival, already in rags, completely shorn, so quickly dehumanized, my aunt Bözsi néni asked the woman in charge, "Where are our parents? When am I going to see them?" 'Look outside, they are going up in smoke there,' pointing to the chimney. I thought that I would kill her."

Through countless, naked selections they managed to live and still be useful; so they were taken out to other camps. In Magdeburg, they worked in a munitions factory.

"They had a machine," Mom described," and I had to push it in and be careful not to cut my hand. The Obermeister came and told me, 'Mein Kind, my child, be careful.' He was a nice elderly man. He said, 'You know, many people cut the hand in this machine. You be very careful because you know what happens when you cut the hand.' You're not useful so they take you to the crematorium."

Mom continued, telling me about another kind soul. "And where we went for water we saw beets on the ground and they were frozen because it was winter. We took a couple of them and the German of course yelled at us. And the owner who gave the water said that the beets are his, that we may have them. And all of us started to cry. And he said to the German, 'This will not always be like this.' He dared to say it, I don't even know how, that this is his land and these are his beets and 'these frozen beets, how can you begrudge it from them?'"

"And I remember," my mother's youngest sister Sárika néni recounted, "once when I started working at this machine, I saw that a young hafling who didn't work far from me was watching me. Then when I was allowed to go to the bathroom he started to say, 'boudoir, boudoir.' Well, I thought that he said it with a different accent, with a French accent, and then, before I went into the bathroom he kissed me. Well, I say to myself, there's nothing wrong with this, it's worse if they hit you. And the next day, close to Christmas, they got packages. And when no one was looking, a honey heart, a pogácsa he gave me in a package. I never saw this person again. I was so full of hope, that you see a human being who is good to you, even if you can't speak his language."

I know why my father survived and his name is Zoltán Kubinyi, the Commanding Officer in charge of Dad's labor battalion, number 108/52, comprised of Jewish men from the northeastern countryside of Hungary. A devout Seventh Day Adventist and a conscientious objector with no gun in his holster, Zoltán Kubinyi defied Nazi orders to have the men be liquidated as Germany was losing the war and there was no more need for them. Upon liberation by the Russian Army, he was captured as a POW, died a year later of typhus in a Siberian labor camp, and was buried in an unmarked grave. His final resting place though is where I visited him, in the Garden of the Righteous at Yad Vashem where a wall bears his name, having been honored posthumously as a Righteous Gentile due to my father's testimony. I placed four stones on that wall, one for each of my father's grandchildren, and said Kaddish.

From his hospital room a week before he died, my father dictated to me some messages for the grandchildren. As he sat up in bed, you could see that he could see each one of them standing before him. Some excerpts, the latter ones to my son Jacob, 16 at the time, two years before going off to college:

• Be friendly and polite to everybody. Never wait for people to say hello.
• If someone needs some help and you can help, I'm sure you will help them.
• Don't associate with bad people. Make sure all your friends are intelligent, responsible people and it won't cause you any trouble. Love them, study together, spend time together, enjoy life.
• What you study is the most important. There is going to pop up something what you like to do.
• And what you do, take it with good feeling: I love to do it, and you do the work.
• If have a boss, be respectful and follow his advice and directions.
• Sometime you going to have your own company. Be reasonable with people.

"I can't imagine never knowing such a wonderful man as Grandpa," my daughter Sophie says. "And I can't help but think a lot about Zoltán Kubinyi, who rescued Grandpa. I've only known this man through stories and already he feels like part of the family. I can't help but think that if this mensch of a man hadn't had an ounce of compassion in his heart, my Grandpa would never have been in my life. My mom wouldn't be here; she wouldn't have had my brother and me. I wouldn't be in this world. The stories everyone is hearing about Grandpa wouldn't exist had this wonderful man not saved him during a brutal time. It is amazing to think about one single person making a difference in so many lives. "

Why I Could Write a Positive Holocaust Book
Fuchs family photos 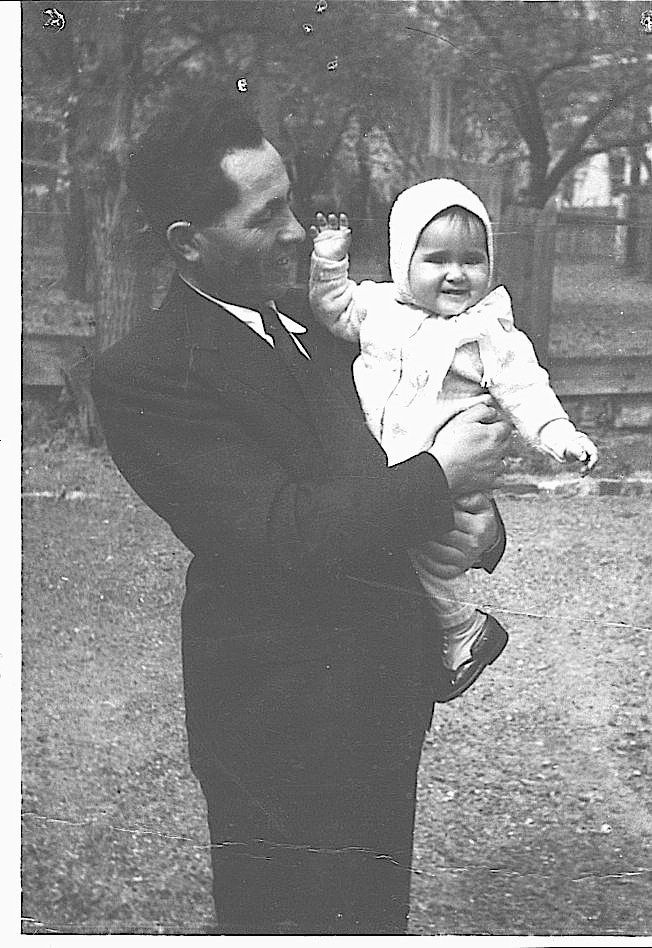 1 / 4
Marta Fuchs as a baby with her father, Morton (Miksa) Fuchs