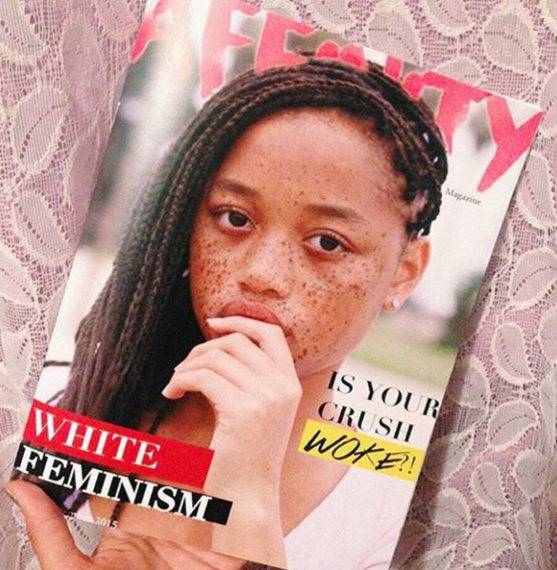 A few names may ring bells, Mike Brown, Leelah Acorn, Kyler Prescott and Tamir Rice. Those are all names of teens whose lives were ended early-- some due to suicide and some due to homicide. In this world, teens are dealing with many internal and external issues. Society tells us to be happy because we are teens and have nothing to worry about. That is false, transgender teens are committing suicide at an alarming rate, and black boys are being killed at an alarming rate. Many teens do not know this, why? There isn't an outlet for teens to learn exclusively about social justice and politics. Affinity Magazine is fixing that issue.

At the age of sixteen, I realized I had an interest in social justice along with politics but the issue was those two topics were very complex. Reading articles about it made my head spin. I wondered, where are the politics and social justice magazines for teenagers? I searched and searched until I realized, they weren't any and still aren't any. It baffled me that the world assumed that teenagers wouldn't be interested in politics nor social justice. Being a black female has alerted me to racial and social injustice. More teens are interested in social justice than parents would like to believe. Nowadays we have teens like Malala Yousafzai defending the right for girls to have an education and fourteen year old Rowan Blanchard speaking unapologetically,so why not cater to that demographic?

A recurring issue is adults want to shelter kids, but you can not. We have access to the internet and that allows access to a lot of content that is mature. Kids in this decade are dealing with a lot of issues from eating disorders, sexual identity, and racial discrimination. You're doing a disservice by not educating them. Yes, race is a sensitive topic and so is sexual identity, but by not addressing it, you're doing more harm. I have had teen readers thank me for writing articles about transgender teens like themselves since there is a lack of transgender representation on tv. Transgender teens are committing suicide because they do not have safe spaces and feel alone- I make it my goal to represent them fairly and realistically. Adults sometimes have this notion that teens have no interest in anything besides gossip and celebrities. Well that's half true, although I do dabble in celebrity news, I also immerse myself in social justice and politics.

Teens have a lot of real life issues that are being overlooked. When I created Affinity, I decided that I would talk about everything, no censor at all, no matter how controversial. We have covered many genders from female to non-binary and even sexualities from bisexuality to asexuality. We have covered white privilege and white terrorism. We have covered stories from the United States to Egypt. We are the voice of teens who feel silenced by society. We ARE interested in politics, and we ARE interested in social justice.

What parents have to understand is at this time, it is pivotal that teens learn about politics, like many teens, I qualify this year to vote. I want to be able to learn about the candidates in a way that it breaks it down easily. Affinity does just that, it publishes politics articles that are easy to understand and short in length.

What makes Affinity very unique is the fact that it utilizes social media. All articles are posted on social media and at times get around 400 retweets. We ask questions on Twitter and interact with readers, at times even telling them happy birthday. It is a community. It is a safe space for teenagers to send in their articles about being illegal aliens, non-binary, agender, and discussing why they need feminism. Since launching in 2013, I have educated hundreds and thousands of teens. Affinity is now read in 171 countries and all 50 states. Affnity is the first, and hopefully not the last politics and social justice magazine for teenagers. We now have an App!