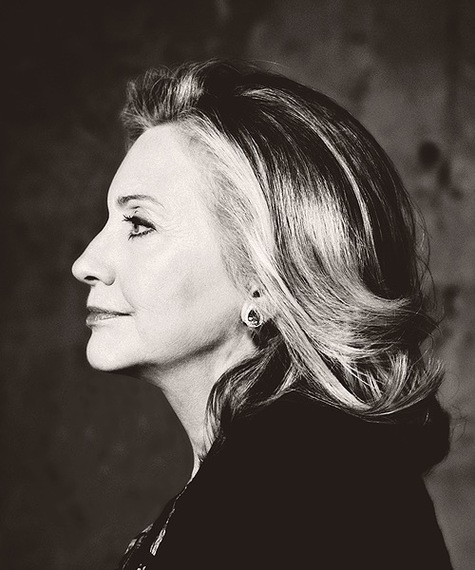 As I filled in the box for Hillary, then watched the paper go into the machine, my eyes filled with tears. I had taken my 13-year-old, American-born daughter with me to vote. I woke her up at 6:00 a.m. this morning to come with me.

"Wake up honey, today, you will become part of history." She wasn't too happy about waking up so early, and standing in the long line in the cold. As we waited in line, she got more excited...I was quiet -- and I'm rarely that. I could feel the emotions welling up inside of me. Today, for the first time, my voice would count. This February, I became a U.S. citizen, after living in this country for 27 years, spending thousands of dollars in immigration fees, and more than 140 hours waiting in lines to file paperwork to keep me in America. My daughter was by my side when I got my citizenship, as she was today. I wanted her to see that not only were we making history by voting, but by standing at my side while I voted, she and I were becoming a part of our family's history and our country's future. As I walked out of the immigration office, then, overcome with tears - she asked me then as she asked me today, "Why are you crying Mommy?" Here is why.

Because I am America. In 1989, I fled to the United States after a coup d'état in Liberia at 15 years old, leaving my family behind. As my father drove me to the airport, I remember him telling me that once I got to America, I'd be safe. I believed him because, as a little girl, I often read about this place -- a land of equality, of freedom, a land of respect for human rights, a place where women and men of all races were welcome. America was a melting pot, a place where people - oppressed, poor and tired, arrived -- for opportunity, knowing that if they worked for it, anything was possible. After arriving in the United States, like the more than 59 million Americans who have arrived on these shores, I knew that if I worked hard, went to school, and contributed to society, I could make a difference. So, I worked several jobs beginning at 16 years old, sleeping on the couch for years, because there were so many people in the house and not enough beds, helped my family, went to church and gave to charity. While many people my age partied, I worked through college. Everything I have has been earned -- nothing was handed to me. No job was beneath me. These are the values of the immigrants that make up this country.

Today, for the first time, my voice would count.

The portrait Donald Trump paints of immigrants does not accurately portray what America stands for. It does not reflect the contributions that I, like many other immigrants have made for thousands of years - contributions of our brainpower, values and hard work, laying the foundation for immigrants coming to our doorsteps in the future. Trump forgets that the very immigrants he speaks of in derisive terms are same one's whose blood, sweat, exhaustion and tears, created our healthcare, technology and economic systems. These immigrants, like me, come to America, not to terrorize or take from this country, but to contribute in meaningful ways, and to build a better life for our children. I, a 27-year immigrant in America, represent these American values - hard work and family. I like many immigrants, represent innovation. I, like millions of other immigrants, represent entrepreneurship, and I want these same values for my child and her children; and today, for the first time, I get to exercise my right to ensuring that I get to be a part of the change I want to see.

Because I have the privilege and right to participate in an act that will change the course of our nation and history. I've heard many people debating about whether or not to vote. Spoiler alert -- by voting or not voting, you're affecting the outcome. Voting is one of the greatest acts of participation in our future and that of our children. Whatever your political affiliation or candidate preference is, you're not just voting for him or her, you're voting for better schools, clean air and water, healthcare and immigration reform. In this election especially, you're voting for women's rights, rights for people with disabilities, kindness and decency. Every American holds such power in their hands - and I'm aghast at the freedoms that so many take for granted. The ability to vote is a right and a privilege. As an immigrant, I see things with different eyes than those born here, who were born with the right to free speech, the right to worship, the right to fair trial, the right to pursue happiness, and the right to vote. In many countries, whether mandated by law or not, people are denied these rights; and in certain parts of the world, using one's voice result in having your home or business burned down, losing a body part or losing one's life. Choosing to stand idly by is akin to apathy. It's saying that you don't care about life, the blood, pain and struggle that so many have gone through; and it's giving up your right to criticize the outcome.

The world needs people who not only speak up, but stand by what they believe in -- and that means showing up.

Because I'm doing this for her. I tell my daughter all the time that your rights mean nothing if you don't exercise them; that exercising our rights is our responsibility to our country. And, by exercising our rights, we teach our children the importance of not living their life on the sidelines. There are too many political pundits, too many talking heads, too many giving opinions and not doing anything about it. The world needs people who not only speak up, but stand by what they believe in -- and that means showing up. Justice, freedom and peace require work. They require action. They require sacrifice. They require that each generation carry forth the work that and legacy that others fought for -- the legacy that could be lost if we get wrapped up in complacency and so focused on what "they" are doing wrong, that we forget to do what we feel is "right". In my daughter's lifetime, at 13 years old, we have seen things come to pass that seemed impossible dreams 40 years ago - a Black President was elected to two terms and we will have the first female President. What this shows my daughter is that despite the Donald Trumps of the world, all is not lost -- hope is alive, dreams do come true, that little girls should not have to worry about being led by a President who would desire to grope them by the "p---y", that we have to fight for the ideals we believe in, and yes, we can. We did for eight years and we'll do it again. I told her that someday, she could be the first Black female President.

Because I'm voting for an ideal, not just a person. What most people don't get is that politicians are not perfect people. In fact, they are like us all, imperfect people trying to make a difference, while making extremely difficult choices, having to make concessions here to get a win there, and people who, frankly sacrifice their lives and risk everything to rise to a position where they can affect some change. I may not believe in everything that my candidate does or supports, because no one person in office can do it all, do it right and please everyone. No one person can get to these levels of office without making mistakes or getting their hands dirty, and the American people can't pretend to be so naïve as to think that any politician is without stain. As a matter of fact, I dare to say that what made this election so salacious was the proliferation of social media at our fingertips. I am not voting for a perfect candidate, I am voting for every woman who was ever humiliated, every individual who were told they were too sick to get or keep a job, every disabled person who was ever mocked, every girl who was ever knocked down, emotionally or physically abused. I'm voting for human beings who, despite trying to do their best, are flawed. I'm voting for democracy. I am voting for America.