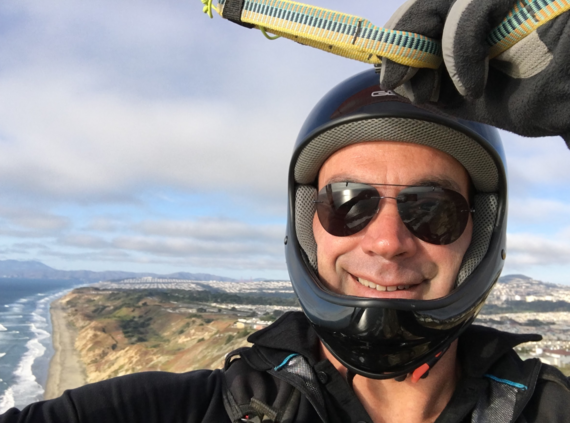 How do you go from 0 to 1? What happens before the startup even comes into the picture?

I have invested as an angel in about 50 startups. It's been quite successful. I could just keep doing this. Oh and some paragliding and kite-surfing when I don't meet great entrepreneurs. I could also become a full time VC or even join a large company. David Marcus went from startup entrepreneur to impacting billions of people with Messenger. Working for Facebook on projects that can reach such a large amount of people must be exciting.

I love the beginnings of a startup. I enjoy the process of finding an idea and creating something from scratch. I don't care if it's going to fail or not. It's the adventure and the learnings that matter. The feeling of doing something new no-one else is doing yet.

I asked a similar question to Richard Branson this year. "Why do you keep starting new things, you don't need to." Richard answered "If we don't start new things all the time, it's a waste. We have to keep innovating. It's a duty."

I don't know about duty. I certainly understand the waste of not using my experience to start something new. Paragliding is very cool though. The good news is I can go paraglide 20 minutes away from my place, fly for an hour and come back. A friend of mine even bought a small solar panels equiped RV that he parks at the paragliding spot. He works from there when conditions are good and alternates flying and working on his laptop.

In the decision to start, there was a lot of "f**k it, I need to start something new, which has been growing on me for a while. I just love building something new, it's so exciting. It's the best feeling. It does not matter where it goes, it's all about starting.

Finding the idea is the next challenge. I had 20 different real startup ideas in the last 12 months. Many friends shared their ideas with me too. It's always the same. I get excited by an idea, I share it with a few friends, sometimes even start talking to people who could join me. I even talked to investors about some of them and they were ready to fund them.

Instead of raising some funding and running with it, I let the idea settle in my mind for a few weeks. Talking to friends about it can be good and bad. There is always many friends to tell you how bad your idea is and it's so easy to stop right there. "Oh he's right, that idea was lame."

I'm aware to start something you should not listen too much to those who tell you you're going to fail. I still did just that and killed those 20 ideas in 12 months and did not start anything.

Then there is the pressure of building something that can be huge. A unicorn. This is "so Silicon Valley". It needs to have the potential to change the World, something we should Reconsider. Especially if you have started several startups already. Small is not an option. Got a few friends tell me this recently. You can't do this it's too small for you. One more killed.

Problem is Brian Chesky had no idea he was creating something huge with AirBNB. The investors he talked to did not think it could be big either. I don't think Mark Zuckerberg had any idea Facebook would have so much potential. He was just creating profiles of his Harvard fellow students so they better connected. Uber was a luxury limo service that wasn't going a priori to revolutionize transportation.

Back to the question, how did I finally decide to launch something? I decided to ignore everybody about the idea itself. I decided to particularly ignore the need for doing something big "because I had to". I'm bootstrapping a small idea instead. I hired only one engineer as co-founder, and I'm funding it myself for now.

Then I decided to build it in the open by sharing my progress in a weekly email. It forces me to deliver, among other benefits.

Sign-up to my weekly email if you like. It's about building my startup if you would like to follow the small idea not changing the World I'm working on.
Thanks, Arjun Juneja for asking this question.