A few days ago, I had the honor of speaking at the "PETA2 Experience" conference in Los Angeles. The day started early at the new PETA Los Angeles headquarters, with hundreds of kids and young adults filling the first floor of the building. I was so excited that I had been asked to speak about why and how I got involved with PETA and when I made the choice to go vegetarian (and eventually, vegan).

When I was 12, I first made the decision to go vegetarian after a co-star's line "I don't eat anything with a face" suddenly shocked me into reality. I had never thought about it like that before. Up until then, meat had always been something that came from a plastic package at the grocery store, not from a living, breathing animal with a face and a mom. My mother, on the other hand, was resistant. She didn't like the idea of me not eating meat at first. I promised, however, to take my vitamins and to make sure I was eating a nutritious diet -- not just peanut butter and jelly sandwiches. 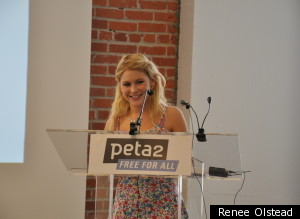 The more I read and watched about the meat industry, the more determined I became to keep meat out of my diet. The things I saw in slaughterhouse exposes made me feel sick and I refused to just ignore what I now knew. Sure, I've heard plenty of people say that it's just a lot easier to 'not think about it' and go on eating meat, but I wonder, if those same people were forced to slit a struggling calves throat or throw a live chicken in a pot of boiling water, whether they'd still have the stomach to eat their dinner. Years went by and I liked how I felt in my new vegetarian lifestyle. I didn't get tired after Thanksgiving dinner, or feel gross and greasy like I did when I was eating ground beef. Almost 10 whole years went by before I decided it was time to take it to the next level and choose a solely plant-based diet for myself.

About a year ago now, I realized I wanted to go all the way. I had heard a lot of stuff in the news about all of the antibiotics in milk products and how dairy cows are forcibly impregnated to produce milk, and I was ready to give it up. Eggs were never really my favorite, so giving them up never really seemed like a big deal to me. Fortunately, I had a partner to explore this strange new territory with me -- my boyfriend Tommy. Up until then, he had been a full-time carnivore, but he offered to do it with me for the first month while I figured out what to cook and what to order when I went out to eat. I found out that the website where I had been a long time 'street-teamer' had a bunch of great lists up on their website to help newbie vegans.

Now, almost one year later, we're BOTH still vegan, after we figured out how easy it was and how much healthier we felt after we made the change. I was so excited when it was finally my turn to speak and I told my story. The day had already had a lot of highlights, like MTV's Steve-O talking about his journey into veganism and fight for animal rights. I was really impressed. I was even more impressed with how the days ended, when I got to participate in one of the largest "McCruelty" protests EVER! I've always believed in standing up for what you believe in, and getting a chance to share my voice along with hundreds of others against the cruelty of factory-farm conditions was an absolute honor. If you're a young person and interested in learning more about going vegan, check out PETA2.com to order a free vegetarian starter kit! 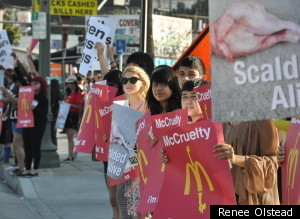 Be sure to tweet me your thoughts and questions at @Renee_Olstead. If you have something on your mind that you'd like to see me write about, I'd love to hear your ideas! :)