Boredom is the enemy of education.

Bored students are uninspired to learn and less likely to retain what is being taught. Yet we desperately need students to be both inspired and well-educated, especially when it comes to the ocean. Youth are the seeds of an upcoming generation. They blossom into our world's great leaders in innovation, policy, science, philanthropy, diplomacy, and conservation. The youth of today become voters and citizens of tomorrow, who will have to make important choices in terms of what seafood they eat, how they use energy, and what they do with their trash. Our future on planet earth is inherently linked to the sea and it looks a whole lot brighter with generations of children educated and excited about the ocean.

But it's not just about the future; it's also about the right here and now. Kids have tremendous influence on those around them. When kids become passionate about something in their life, their parents get involved, as do their peers. As consumers, kids have remarkable power -- look at the phenomenal economic force that is Harry Potter. We need their influence and power to combat such issues as climate change, overfishing, marine pollution, invasive species, and the loss of critical ocean habitat.

A New Adventure in Writing

It is with these thoughts in mind and a request from both parents and educators, that I recently undertook the at-times daunting task of writing a new fiction series for kids of middle school age (8 to 12 years old). The books combine fast-paced adventure and humor with learning about the ocean, marine life, and real-world ocean issues.

I've written numerous popular science and illustrated children's books, but I've never done anything specifically targeting middle graders. This, however, is a very influential time in a child's life. Many are naturally curious and interested in science and the ocean -- okay, especially sharks and dolphins. The pressures of high school have yet to be realized and experiences can spur life-long interests and maybe even a career path.

First thing I did was my homework. I now have an excellent collection of popular (and less popular) middle grade fiction books. For inspiration, I looked for books that were not only popular, but also where I felt connected to the style of writing. I'm now an ardent fan of Rick Riordan's witty and Greek mythology-based Percy Jackson series. In addition, while giving talks with middle graders in the audience, I paid particular attention to what made their eyes light up, giggling ensue, or hands go up for a question.

Keep it simple, yet interesting and fast-paced, make it fun, and don't be afraid to use age-appropriate humor and some wicked sarcasm.

Simple is often referred to as dumbing-down. The last thing kids (or most people) want is to be talked or written down to. That's not to say I'm explaining bioluminescence with an equation for the biochemical reaction that can produce it. But it does mean getting rid of technical jargon and integrating science in a way that is easily understood.

Fun. While giving talks about my popular science book, Sex, Drugs, and Sea Slime: The Oceans' Oddest Creatures and Why They Matter, kids loved hearing about how marine organisms use mucus to defend against predators, capture food, travel or clean themselves. The laughter and screaming were so inspiring, I recently published an illustrated children's book entitled, Sea Slime: It's Eeuwy, Gooey, and Under the Sea. And let's just say mucus plays a key role in my new fiction series.

One of my favorite aspects of this five-book project is the age-appropriate humor and sarcasm. In the first book, The Shark Whisperer, a shark gets dentures, a pudgy moray eel is on a diet and undersea fitness program, there is a lock-picking escape artist octopus, and a barrage of bird poop bombs that rain down on the bad guy at an opportune time. Later in the series there is also a mantis shrimp with anger management issues, a vegan blacktip shark, and yes, jokes having to do with a sea otter and a little gas problem. In addition, I've integrated into the story fun facts about numerous marine organisms, descriptions of real ocean habitats and phenomenon, and events based on my own experiences as a marine scientist. The bad guy in the first book is shark finning and blowing up coral reefs. Other real-world issues included in the series are overfishing, marine pollution, illegal fishing, invasive species, and climate change. I've also created a website where kids, parents, and educators can go to learn more, and the publisher (Scarletta) has produced an accompanying educational activity guide.

So far, the reader response has been terrific. Parents are already getting in touch looking for book number two for their kids, which is due out Spring 2015 (The Shark Rider). And the notes I'm getting from educators, parents, and kids are especially rewarding. One 7-year-old who was reading The Shark Whisperer with his mother recently informed me it is his favorite book along with Harry Potter, he would like to play Tristan in the movie, and that he has a pet fish to play a fish. A reading teacher emailed me to say that her struggling readers finished the book and cannot wait for the sequel. And 11-year-old Jay says not only did his dad like it too, but now Jay wants to explore the ocean more.

It is my hope that by combining exciting adventure and humor with fun ocean learning more kids will get excited about the sea and it will inspire a life-long interest and connection. I'm also hoping to promote science and reading, especially for struggling or reluctant students. I've got my fingers crossed as we ready for the release of book number two in the spring. 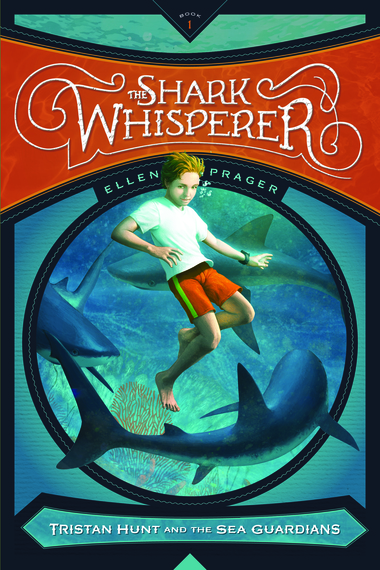