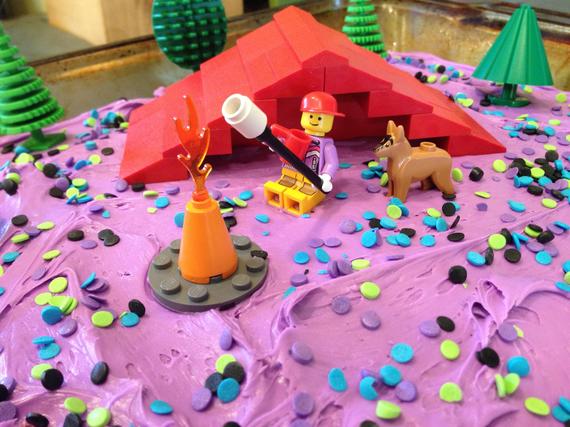 When I was in my early twenties, before I had children and a mortgage, I used to throw epic parties. I'd create a goofy theme like "hunting camp" or "circus", and just run with it. My parties featured a kissing booths, a bar stocked with "mystery shots", costumes, even a live polka band. I knew how to have a good time and give all my guests an experience they'd be talking about for years. So what if at the end of the night there was a huge mess or even a few holes in the walls?

When I became a mother, I figured this love of hosting awesome parties would extend to my children's birthdays. But I was so wrong.

Hosting a kid party is really different from hosting a keg party. At kids' parties, everyone is sober and things are supposed to be safe and yet memorable. I am terrible at pulling this off. My idea of a safe and sober party is just boring. In the past decade, I've changed more than I realized. Now I live in a house where I actually care if we end up putting holes in the walls.

Why didn't anyone warn me that a small group of toddlers can destroy your house faster than a dozen college-aged drunk people?

As my son's fourth birthday approached, I decided this year was going to be different. He wasn't going to have another boring party. I was going to finally do things right.

I would throw him the best birthday party ever. The theme would be simple: camping. There would be a hike, a scavenger hunt, a game that revolved around fishing, cute camping-themed snacks, and the goodie-bags would have stuff like flashlights and compasses inside.

As I began to search around on the internet and make lists of everything I needed to do to pull this off, I found myself hoping that maybe we would all get plague or something and just have to cancel the party. Or maybe we could all just go out of town and forget the whole thing.

Then one day my son and were looking through the photo album of my life when I was his age. There were the pictures from my own fourth birthday party. Suddenly I remembered how excited I was just by the rainbow tablecloth and the sprinkles on the "cake" that was really the same sheet of brownies my mother baked for every special occasion. In that moment, I realized that I was really going over the top with his birthday party and I needed to tone it down.

Why was I doing all of this planning? Was I trying to impress the four year old guests?

I couldn't possibly be putting this much energy into throwing a party for kids that are young enough to wet their pants and then pretend like it never happened. All they care about is playing together! My son would literally rather sit in piss-pants then stop playing long enough to use the bathroom or change his clothes. I'm guessing that these kids are not going to care if the swag in their goodie-bags is handmade or if they get a bunch of leftover Halloween candy and temporary tattoos.

Then I realized that the people I was trying to impress weren't the children: it was the other parents.

When I went through the list of invitations, I realized that most of the grown-ups who were planning to attend are already my friends. They are familiar with our family and they accept us the way we are. They know that when they hang out with us, things are going to be a little wild and a little disorganized. But they stick around because they also know that we never act fake and always like to have a good time.

It's true, some people will be coming to my house for the first time and I want to make a good initial impression; I'm as desperate to make new parent-friends as a shelter dog visiting their first dog park. But why put on a show for these potential friends? If they're going to become part of my tribe, shouldn't I put them at ease by showing them that I'm human and not perfect? Probably they are as starved for adult interaction as I am.

I went online and deleted my inspiration board and started over from scratch.

I decided to keep the camping theme, but only very loosely. For most decisions, I asked my son what he wanted. This was his birthday party. It's supposed to be all about him so he should get to have a large role in how it all goes down. Sometimes I fell off the wagon and I would catch myself on a webpage showing me how to make tiny edible tents out of caramel, and pretzel-marshmallow campfires perched atop Ritz crackers. Pinterest kept haunting my mind the way an ex-boyfriend will text you two years after the break up looking for a booty call. It's tempting, but no, I've got this. I'm on my own now.

So here's what ended up happening: we had a big, fun, inexpensive birthday party.

We didn't hire a professional performer: instead we had a bonfire. It was dangerous, but extremely entertaining. There were no elaborate party games and we didn't rent a bouncy house: instead we borrowed our friend's ten-person tent and stuffed it with pillows and old sleeping bags. The kids jumped around in there and pretended to be sleeping outside.

I didn't buy any gorgeous banners or even any balloons. Instead of decorating the table fancier than I did for my own wedding, I hit up the dollar store- where my son chose a plastic tablecloth with balloons all over it and napkins that said "Happy Birthday" with a jumping dolphin. Somewhere deep in my brain I heard my inner control freak scream, "Balloons and dolphins have nothing to do with camping! You're doing this all wrong!" but I told that voice to shut up.

Instead of making a bunch of labor-intensive snacks, I served homemade alphabet soup, hotdogs, and a big bowl of goldfish crackers. Instead of stressing over presenting the perfect cake, I took my son to the baking aisle at the grocery store and let him to choose whatever he wanted. He ended up picking a bright pink cake mix that was supposedly strawberry-flavored, and bright purple frosting. As a surprise my husband and I used Legos that we already owned and constructed camping scene and put it on top. It looked bizarre and I caught myself wondering what the other parents thought of all the artificial colors, but my son was so excited.

During the party, amid the chaos of hosting a dozen four-year-old kids and their parents, I paused and took it all in. I saw children playing in the trees and running through the yard. Adults were sitting on rocks, talking to each other and roasting marshmallows. People looked relaxed. Everyone was having fun. Even I was having fun. Most importantly, my son had a huge smile on his face.

The birthday party was definitely was not Pin-worthy. But it was perfect.

This post was originally published on This Is Motherhood.