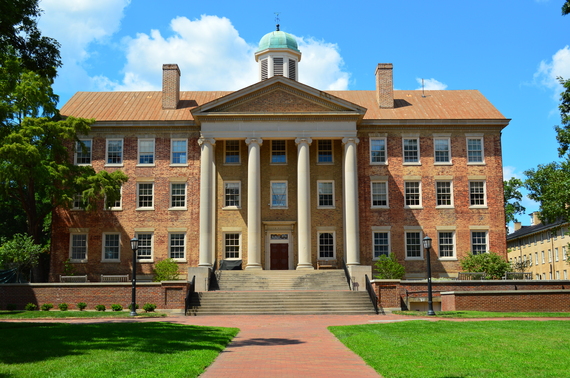 Image Credit: "UNC South Building" by Yeungb - Own work. Licensed under CC BY 3.0 via Wikimedia Commons

Here's how it started.

I was raped in grad school and didn't tell anyone. (That's a common story.)

Later, I told someone about my rape, but I didn't report my rape because reporting rape on campus was, and still is, kind of a nightmare. (That's also a common story.)

Later still, I wrote a short story about being raped and published that, but the story was fiction and not real. (It was not real.)

I never reported my rape to the police -- even though, even now, I could. North Carolina, the state where I live, where he raped me, has no statute of limitations for felonies.

No statute of limitations. What he did will always be a crime. In my eyes, and in the eyes of the law. Right?

Other people ask me that question, sure. But mostly I ask myself.

Why didn't I report being raped? I ask myself that question a lot. And then I torture myself with the answers.

Because my rapist is a doctor and no one will believe that a doctor would do something like that.

Because I was basically cheating on my boyfriend when I went home with my rapist. And even though I didn't want to have sex with my rapist, that won't matter in the eyes of a prosecutor or jury.

Because I have a psychiatric disability that will torpedo my credibility in the eyes of anyone, and I mean anyone, who knows anything about prosecuting rape or defending against rape charges. I am a lawyer, and I know that anyone with a psychiatric disability like mine would have her credibility as a witness destroyed by even the most poorly trained, overworked, and nervous defense attorney.

Because I don't know if I will survive that experience.

Because I was so drunk on the drinks my rapist gave me at the bar that I passed out in my rapist's car while he drove me to his apartment and so I didn't even know where we were. My drunken state didn't matter much to me until after he raped me. After he raped me, I didn't know how to get home. So I asked him to drive me. And then later I realized that asking him to drive me home would give a defense attorney even more ammo against me because why would I ask him to drive me home if I was afraid of him? Why would I choose to spend more time with him if he was a rapist? Why didn't I just run out of his apartment and start screaming? Isn't that how a rape victim is supposed to act?

Because I didn't act like how a rape victim is supposed to act.

Because I was so drunk and passed out in my rapist's car, and therefore I didn't know which of the little towns around here his apartment was located in. When I think about reporting to the police, I realize that I don't even know which police station to report my rape to because I don't know which police force has jurisdiction over my rape.

Because I don't want to even think about the word jurisdiction.

Because after I was raped, I hated myself and wanted to die. And I still kind of do, even years and years later.

Because my rapist was a friend of my family, and I didn't know if they would take his side.

Because I knew that if my family took my rapist's side I wouldn't have a family any more. So I thought it would be better not to put the issue to the test.

This piece originally appeared in Side B Magazine. Reprinted here with permission.