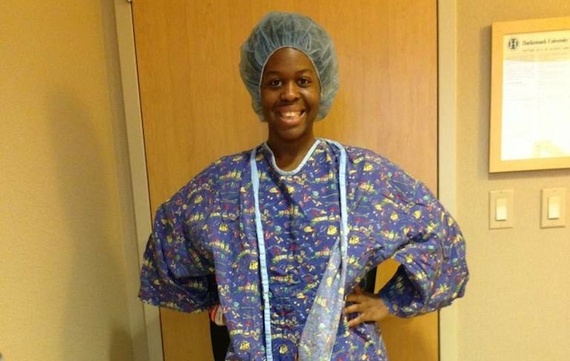 It all started with a high-school blood drive.

As a teenager eager to get out of class for a few minutes, I signed up, gave blood, got a cookie, and discovered a new passion. I gave blood every chance I got—I loved being able to give part of myself to help others. When I learned that platelets help control blood clotting—and that donating them could help trauma victims and patients battling cancer and chemotherapy—I graduated to donating those.

Then, I saw the movie Seven Pounds. In it, Will Smith’s character donates bone marrow to a boy in need. I immediately went online and Googled "bone-marrow donation." The Delete Blood Cancer website was the first result, and there I learned that someone in the U.S. is diagnosed with a blood cancer every three minutes. That includes life-threatening forms of cancer, such as leukemia, lymphoma, and multiple myeloma. And although about three in 10 blood cancer patients can find a matching donor in their families, 70 percent of patients depend on a stranger to step in. That was enough for me to know I wanted to help.

I immediately registered online with Delete Blood Cancer, and about a week later, I had received a little swab kit in the mail. I rubbed the two cotton swabs along the inside of my cheeks, put them in the return envelop, and sent them back so that Delete Blood Cancer could analyze my DNA and see if I was a match for any blood cancer patients in need.

Four years later, in January 2014, I got an e-mail from the organization. I almost deleted it, thinking it was spam. Thank goodness I didn’t—it said I had a possible match.

To make sure all systems were a go, I had a couple of extra blood tests. The doctors dug deeper into my DNA, checked for any heart problems, and verified that I was healthy enough to go through the donation process.

Although three-fourths of donors only need to give peripheral blood stem cells via a blood draw, I needed to donate bone marrow. That’s most often the case with young blood-cancer patients. I was told the person to whom I was going to donate was a little girl—and I immediately broke down into tears on the phone. 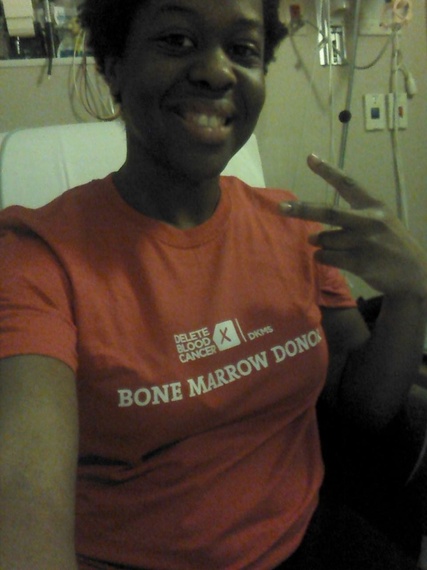 Getting Stuck: The Bone Marrow-Donation Procedure

My parents weren’t so excited to learn about my upcoming donation. They knew how passionate I was about blood and platelet donation and that I was hitting up New York Blood Center every month to donate, but they were much more comfortable with a blood draw than a bone-marrow draw.

“You could become paralyzed!” they said. “No, no,” I told them. I walked them through the process, explaining that during the procedure, the needle isn’t inserted into the spine; it’s inserted into the back of the pelvis. I told them that, while it’s uncomfortable, it isn’t nearly as painful as most people assume it is. Plus, the bone marrow completely regenerates itself. Clearing up their misconceptions definitely helped them warm up to the idea, but in the end, they also knew that, once I put my mind to something, I was going to do it. “You might as well be with me on this,” I said—and so they were.

Four months later, donation day had arrived, and I met with all of the doctors who would be performing the procedure.

At 9 a.m., the procedure started. By noon, I was on my way home from the hospital. In between, the doctors had put me under anesthesia, made little incisions in my back (I didn’t even need stitches!), and inserted long needles through them to extract bone marrow out of two spots in my pelvis. They froze the cells to ship them off and told me the recipient was in the United Kingdom.

I won’t lie—for a while, I was in pain. My butt was sore, like I had bruised my tailbone or something. The doctors said the pain is worse the more sedentary you are, so I walked around my Long Island neighborhood several hours after the procedure. I wasn’t about to do a 5k sprint or anything, but I made it a few blocks. The procedure was on a Wednesday, and I was back at work on Monday—albeit with a small limp and an ice pack. Since I work at a school-portrait company, which involves walking around schools and lifting heavy equipment, my boss assigned me to less labor-intensive tasks for a week or two. After a month, I was back to normal.

Even though the doctors gave me painkillers, I didn’t take any. And trying to remove the glued-on gauze covering the incisions hurt more than the actual procedure. In the end, the discomfort was secondary to the emotional high of helping a little girl with cancer. If sporting a sensitive behind and a limp was as hard as potentially saving her life was going to get, that was awesome by me.

Would I Do It Again? Definitely.

To me, it doesn’t matter that I’ve never met the girl who received my bone marrow—that I don’t even know her name. I still feel like I have such a powerful connection with her. There’s something within our DNA that brought us together. I hold that knowledge really close to my heart.

It’s literally a one-in-a-million thing: Delete Blood Cancer has registered more than five million donors, but six out of 10 patients are still unable to find a donor match. It’s even more rare for patients of African descent to find matching donors (African Americans make up only seven percent of donors registered with Delete Blood Cancer).

A year and a half later, I haven’t heard how my bone-marrow recipient is doing. Delete Blood Cancer hasn’t come back to me asking for another bone marrow donation, so I’m hoping that’s a good thing and that she’s doing great.

But if they do call me back, whether it’s for her or someone else, I’d do it again in a heartbeat.

Tamara is featured in Delete Blood Cancer's new campaign, #uniquebecause. To learn more or to sign up as a potential bone marrow donor, visit uniquebecause.org.

The ultimate guide to looking and feeling great. Get the latest in health, fitness, fashion, beauty, and more!