Sometimes it feels like my son is deliberately trying to push me over into that parenting place where my thinking stops and feelings rule. Where finally, after a full day of whining and sibling squabbles and talking back, I lose sight of my boy's goodness and say something I later regret. It's usually in the form of, "Why can't you just... (fill in the blank)," or "Why do you always have to... (fill in the blank)," or "What is going on with you!" My tone is harsh, and in that moment, my desire is to shirk my responsibility as the only adult present and to blame. I don't expect an answer to my questions. I'm just boiling hot, and need to release my frustrations. And there's my little boy, standing in front of me. I see him cower, but the engine of my anger train is just revving up, and it's energy overcomes me. It's leaving the station, and it has power over me. I've now lost control too. I'm overcome with a "need" to overpower something or someone. A power that when I'm in my right mind, I don't even want.

That's what a bad day looks like. And we all have them.

Mostly, though, I've learned how to avoid boarding those anger trains -- those trains that take me on a ride towards the land of blame and shame, where I can rule with an iron fist (at least with the younger ones). I hate that land. It's not perfection I strive for as a parent, but my goal is to hop that train as infrequently as possible. 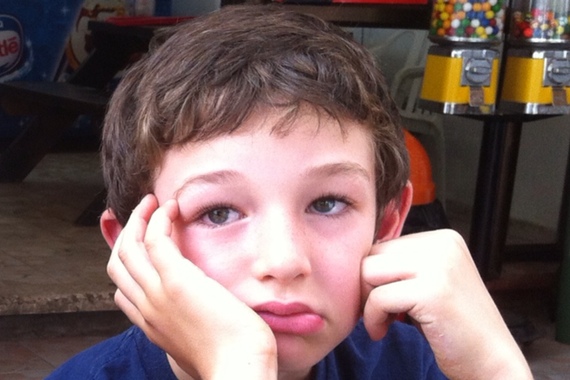 The other day my boy was driving me nuts. He was sulking around the house, barking at his brothers with all sorts of choice words, and the only response he could muster up to any bit of thinking I offered was, "What do I care?" I thought to myself, "One more 'What do I care?'" and I'm going to be on that train of mine. I asked him if he wanted an hour of Special Time.

I took a deep breath. I knew he needed to connect with me. And I knew I needed a framework to help me remember that I love him.

I set the timer for an hour. I've been doing Special Time with my boys for years, so I've built up stamina. I can pay full attention to one of them for those 60 minutes, pouring in love and appreciation despite their ugly behaviors. I can be pleased to do whatever they want -- accept their requests for sugar-loaded treats, or set up a bunch of pranks around the house. None of it phases me anymore.

I took another deep breath.

"I'm not going to leave you alone when you're struggling. Later on, you can be alone. No problem."

He lay down on the couch, facing the back cushions. I sat down next to him, positioning my tush behind the crook of his knees. He tried to push me off with his backside, and again screamed at me to go away. I stayed. After a few minutes, he stopped pushing and continued telling me to leave. I stayed. After another few minutes he quieted.

"What do you want to do for Special Time, baby?" I asked again in a tone that expressed the sweet anticipation I was now feeling.

"I don't want to do Special Time," he threw out the words with about as much life as a dead cat.

After another five minutes or so, he asked me if I knew how to make caramel. I told him it just happened that one of my college roommates had lived on caramel corn, and I had watched her make it so many times I was sure I could do it with my eyes closed.

He dragged himself off the couch and towards the kitchen. I knew he wanted to make caramel and that he was grateful for my attention, but his body language successfully disguised his pleasure. I was familiar with the "How long will you hang in with my nutty behavior?" test. And I knew how to hang.

For the next 45 minutes we played in the kitchen. It started out slow and quiet, but fairly quickly my boy grew more animated. The smiles returned. It was as if we had blown air into that half-deflated balloon from last night's party. He stood up straight. Suddenly had lots to talk about.

When the timer rang we had just poured the sticky caramel into a glass baking dish. Together, we cleaned up our mess, and then we went our separate ways. He headed to his room to do something on his own. And I made myself a cup of tea and took a five-minute break to appreciate my success in staying off the anger train, and bask in my son's sweetness -- and love of sweets!

Tosha Schore, M.A. is co-author of Listen: 5 Simple Tools to Meet Your Everyday Parenting Challenges, and founder at Tosha Schore, Your Partner in Parenting Boys. Her mission is to create a more peaceful world, one sweet boy at a time.