Although I pride myself on having wide-ranging taste in art, there are some artists that consistently rub me the wrong way. There is one major American sculptor in particular whose work I don't care for.

Yes, I am a Richard Serra disliker.

Before I go further I should clarify something: I don't dislike Richard Serra personally. I had the chance to meet him when an exhibition of his was being installed at a gallery where I worked in the early 1980s, and he was very pleasant to me. He was immensely intelligent, and I enjoyed having the chance to drive him on a few errands and hear him talk about art. Serra has a temper -- I watched him chew out the photographer who had been hired to document his installation -- but I figure that "fiery" can be sign of integrity. As I gained a generally positive impression of Richard Serra the man, the two massive pieces of battleship armor that I saw installed in the gallery floor were charming me less than he was. Over time, and after periodically viewing many more Serra installations, I still haven't warmed up to Serra the artist.

I think that Serra's work is vastly overrated, pompous and inhuman. I think that most of the credit for the presence found in Serra's steel pieces should go to the foundry in Germany that fabricates them. Serra strikes me as an aesthetic bully whose installations are imposing to the point of actually intimidating the public meant to appreciate them. I do, however, think that Serra's large steel pieces sometimes make nice backgrounds for photographs of people. So do rusting battleships.

OK, my opinion is out there now: I'm in trouble, right? 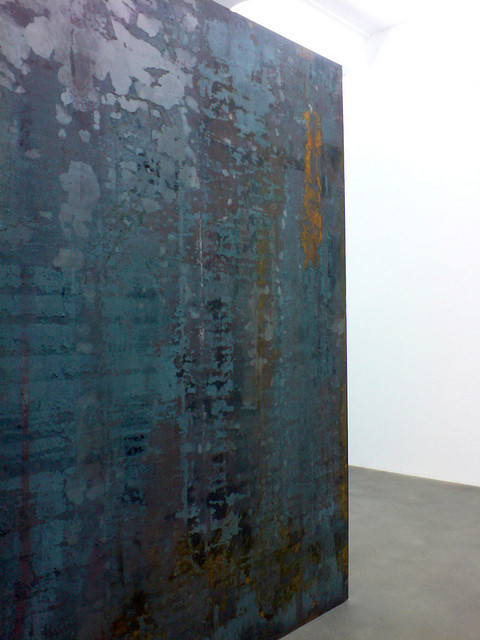 By airing out a private judgement in public I have given you -- the reader -- the opportunity to judge my taste against your own opinions and biases. If you agree with me you respect me more and if you disagree we are now at odds. As human beings we are always most comfortable around others who share our taste. We are naturally insecure around those who disagree with us, and when the matter involves taste things get quite personal.

Taste is art is about a kind of freedom: the freedom of preference. Each of us likes what we like and nobody can or should define our taste for us. If a student tells me "I love Thomas Kinkade!" I try to keep my disdain in check and congratulate them on having a passion for art. At the same time, I also get ready to offer them a broader range of art to look at. I believe that the proper way to teach art appreciation is to expose not to indoctrinate.

When I find myself getting too smug about my own taste, I keep humble by reminding myself of something I call the "Green Eggs and Ham syndrome." Years of looking at art have taught me that sometimes something that I have been rejecting morphs into a source of pleasure. "I like green eggs and ham!" I suddenly exclaim...

When a work of art that we previously found puzzling, unsatisfying or even repellent suddenly enchants us, an internal boundary is erased. According to the British writer and philosopher G. K. Chesterton, all art involves "drawing a line somewhere." Challenging works of art dare us to cross the line of our preference and to even change our notion of what may or may not be art at all. Expanding the boundaries of taste offers an exciting prospect: new pleasures.

One of the reasons I read art criticism is that individual critics hold out the prospect of new discoveries. Of course, I reserve the right to disagree. My disdain for the works of Richard Serra puts me directly at odds with the views of an art critic that I genuinely admired, the late Robert Hughes. Here is what Hughes wrote in the Guardian after viewing Serra's installation at the Guggenheim Bilbao in June of 2005:

"Let's come right out with it: on the basis of his installation of one old and seven new rolled steel sculptures at the Guggenheim Museum in Bilbao, we can call Richard Serra not only the best sculptor alive, but the only great one at work anywhere in the early 21st century."

That is high praise from a man that had extraordinary erudition. Just re-reading it activates some insecurity on my part: could I possibly be completely wrong about Richard Serra? Then again, one's taste is never "wrong," even though people will tell you that it is.

Am I six months away from discovering a work of Richard Serra that I find immensely moving and beautiful? Is one of Richard Serra's curving walls of COR-TEN steel going to be my green eggs and ham? Possibly...

Of course, this blog isn't about Richard Serra. What I want to write about is the mutability of taste. Whenever I lay out my own opinion about art I do so realizing that my taste is not stable: it's development is an ongoing project. I have written enough to sometimes be called a critic, but I'm too aware of my own intellectual capriciousness to take on that responsibility just yet. I worry that declaring myself a critic would result in more people being critical of me.

Critics play a role in the way that taste is transformed into commerce, so they occupy a hot spot in the art world. One of my Facebook friends -- an artist -- recently had a few choice things to say about art critics on his Facebook status:

"I am so sick of these so called art critics who don't know shit. A friend asked recently: How does someone become an art critic? My reply: Well, first you have to fail or give up completely at being an actual artist. From there you find a way to tell other artists how to be good artists."

Those comments hit home because I am an artist turned writer. And yes, there is something very appealing about becoming a larger fish in the art pond and having the chance to give patronizing advice and pronounce judgment. Having my brief public rant about Richard Serra was very satisfying: it let me, the failed artist, connect with a nice juicy revenge fantasy. Frankly, it also felt good to disagree with Robert Hughes, who became a critic after "failing" as a painter.

Could it be that my reactions are petty and personal? It is certainly possible, just as it is similarly possible for anyone who pronounces judgments about taste. I keep in mind that while a particular critic or commentator may be broadly exposed and profoundly learned, they are human too.

Despite being a "Serra disliker" I recently took some time to read a blog by Ed Schad, who wrote a review of a Richard Serra drawing exhibition now on view in Los Angeles. In his blog, he talks about the way that Serra's works have a kind of force of nature about them, and makes this observation:

"Nature is at best apathetic of us and the enormity of its silence and disregard of us has a strange way of making us seem precious and unimportant at the same time."

In other words, some of the same things that have made me hostile to Serra's works -- their uncompromising force and intimidating presence -- are directly connected to the aspects that Ed found so moving and profound. Ed's blog in itself is so beautiful that it made me promise myself to go see the Serra show. Part of me hopes that Serra's works will live up to Ed's praise. Part of me also hopes I don't like the show, so I won't have to change my mind.

Your taste is who you are. My taste and I are both human, flawed, and always evolving.

For the time being I remain a Serra disliker. What about you?