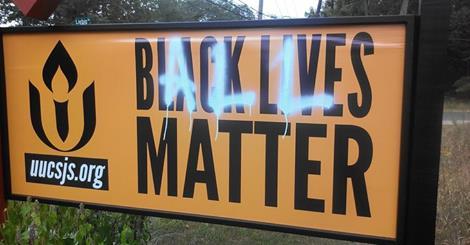 Hashtags are one of the best ways to get someone to pay attention to something you're doing online. While I'm typing this #TheFlash is trending and people on twitter are talking about the new episode of The Flash. Hashtags are not only a way of getting people to talk about trending topics, but they're also a way to get people to pay attention to certain issues and tie the conversations all together. #BlackLivesMatter is a hashtag that was created by Alicia Garza, Patrisse Cullors, and Opal Tometi  after George Zimmerman was acquitted after being charged with the death of Trayvon Martin in 2013. The hashtag was created to bring attention to police brutality and how it specifically targets black people. However, #BlackLivesMatter is more than just a hashtag, it's a movement. Being somewhat of an activist myself, I know that people often downplay the importance of online activism. However, in the age of information, utilizing tools like hashtags is an effective way of getting your messages out there and spreading your activism world wide. #BlackLivesMatter demonstrations take place across the country and even across the pond. The environment created by this movement has given a space for black people to bring attention to the issues that they specifically face while also offering a space to mourn the loss of black life. There are some people, however, that do not like the popularity of the Black Lives Matter hashtag and have taken to creating their own: #AllLivesMatter.

Now, before I dive into my criticism of #AllLivesMatter, I wanted to tell you that I've had this conversation several times previously. In fact, I already wrote and filmed a video for Everyday Feminism about this topic. It's a topic that's exhausting to me because I have a very hard time understanding why people don't see the problem with responding to "Black Lives Matter" with "All Lives Matter". I can summarize my criticism by saying simply that, if you cared about all lives, then discussing the specific issues black people face wouldn't bother you. I mean, I wouldn't go to your grandmother's funeral to tell you about how my cat died the other day and demand that you pay attention to my cat while you're in mourning. Yes it's true that people of all races and creeds face police brutality, but we don't all experience it in the same exact way. Black people have high incarceration rates not because they commit the most crime in this country, but rather that people are already looking at them with suspicion while ignoring or turning a blind eye to white people who commit the same offenses. I'll never forget dating a white drug dealer in college (long story, I didn't know he was a drug dealer, not my bag) and he was able to be as successful as he was because he was a white man who looked like a nice, respectable guy that no one would ever even suspect of having anything vaguely to do with drugs. Yet I saw him deal hard drugs to other white students at my schools who also never were looked at with suspicion because they were also just assumed to be good kids. When you're black you become very aware of the negative way in which society views you. You become so aware of it that many times, you'll do whatever you can to dissociate from your blackness. You'll say "i'm not like one of those black people, you know?" or you're joke about how "white" you are. That's because we live in a society where from a very young age, children become hyper aware of the fact that black people are viewed as dangerous and negative while white people are often given the benefit of the doubt. That's why conversations like #BlackLivesMatter are so important because, well, how we're perceived in society is very different. I'm always expected to be boldly different than "those" black people, while a white person has the benefit of being able to be seen as an individual.

Oh, I'm sure I know what you're saying at this point: "But Kat, didn't you just make a generalization about white people? Isn't that the same exact thing you're arguing against?". Well, I don't make generalizations about white people, really. I think, in large part because of the culture I'm raised in, I give white people the benefit of the doubt, but I am never surprised when a white person turns out to be racist. My partner is a white man who works with the public pretty often. We live in South Orange County, California in a city that is pretty unmistakably a bastion of whiteness. My boyfriend will often come home and tell me about the racist things that his clients will say to him off the cuff as a joke that, of course he'd be ok with since "they" aren't around. When his coworkers found out that he was dating a black woman, one of them remarked that he didn't seem like the type of man to have "jungle fever". Dating a white man who is very much invested in anti-racism has revealed to me that, unfortunately, we really do still live in a time where racism exists, but it's a lot more quiet and self contained. But if you asked your average person who screams #AllLivesMatter, you'll very quickly hear that we simply make a larger issue out of racism than it really is. 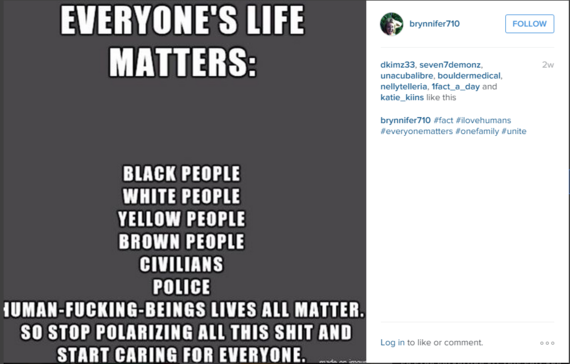 This is a post that I came across on instagram. It's a very typical #alllivesmatter meme that I've seen posted over and over again. I'm always skeptical when I see posts like this because, again, there's something about responding to "hey, black people face a specific type of police brutality" with "Actually, ALL people face police brutality! All lives matter...BLUE lives matter". No one was suggesting that white people's lives didn't matter or that brown people's lives didn't matter or that yellow people's or civilians or police lives didn't matter. Yet this is what they hear. Instead of hearing "black lives matter too", they hear "black lives matter over everyone's"... and no one was saying that or even insinuating that. This is one of the big reasons I don't trust people who say #alllivesmatter. It's concern trolling. I wonder what they even know about how brown people are profiled, especially in a post 9/11 world. As an activist, I want to educate myself on the many different ways that people of color feel oppression. We may share commonality, but we are not the same and we are not up against the same types of forces. So I will always stand up for people who face police brutality regardless of their backgrounds because I do believe that all lives matter and I'm not threatened by people of specific groups making space for themselves to address issues they feel aren't being addressed. These people don't quite feel that way. #AllLivesMatter is a trump card that they pull out to silence these conversations and I'll never really understand why they do that when they claim to "care for everyone". Like i said, I don't really trust people who utilize that hastag, so I thought i'd take a look at her other photos. 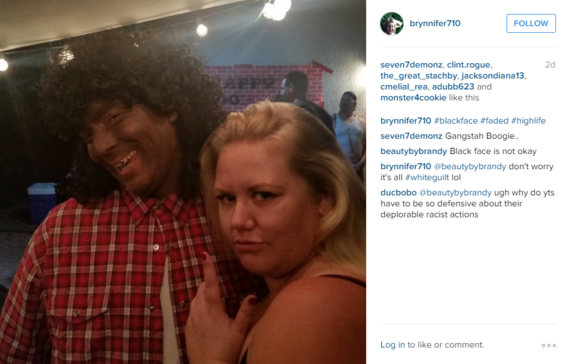 .... Here we have the same exact user, who claims that All Lives Matter and that we should all care for each other's lives posing with a man in blackface with the hashtag #blackface. Now one thing that I've noticed when I engage in these conversations with people is that they often feign ignorance. They often pretend that they have never seen racism in front of them so racism couldn't possibly exist. We're just making things up and drawing conclusions where there are none. But here we have a woman proudly posing with a man in blackface and even going as far as to joke about it after the fact and is self aware enough to hashtag it #blackface. If you don't know what blackface is, I made a very through video about it last year. In short, Blackface is an artform that was extremely popular both in America and around the world where non-black (usually white) men painted themselves coal black to mock black people. Blackface established several harmful archetypes that are still used against the black community to this day. Someone dressing in blackface, wearing a wholly wig and making drug references is certainly an extension of that and this woman cosigns it while claiming that #AllLivesMatter. 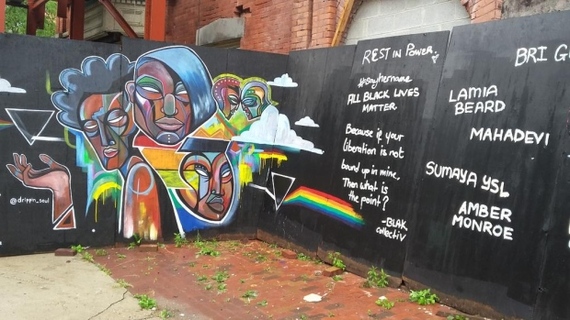 An absolutely beautiful mural by  Kalkidan Assefa was painted in Ottawa, Canada to commemorate the deaths of trans women of color; who are overwhelmingly the targets of trans misogynistic violence. You'll see "All Black Lives Matter" is written on the side of the mural. #AllBlackLivesMatter is an extension of the initial #BlackLivesMatter campaign that seeks to include all black lives, not just the lives of cis black men who overwhelmingly end up being the focus of these conversations. This is what happened to the mural soon after it was completed. 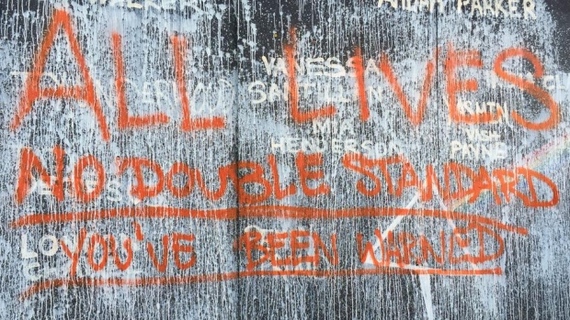 "You've Been Warned" were the words written beneath a large orange scrawl that said "All Lives Matter, No Double Standard".

Think about this for a moment: An artist decides to create, what is essentially a memorial piece to respect the lives of trans women of color who were unjustly taken from this world and the response of some one was to deface what was an absolutely beautiful mural and say, instead "All Lives Matter". This was an act that was done to threaten and terrorize the black community. The one of the vandalism has the unmistakable subtext of "know your place".

What I am discovering, as a black woman who's platform as a blogger is growing more and more is that when people of color carve out a space for themselves, it threatens many white people. Suddenly we aren't having to turn to a white person and make sure that everything we're saying doesn't offend their sensibilities. We're speaking for ourselves about the things that impact us. Things that are often ignored by the mainstream media. We no longer need to rely on them and get their cosign to do something or to speak up for ourselves. Some white people are threatened by that. They view our bold desire to make space for ourselves as a threat and they can only respond with violence and vitriol.  I will never understand that. It seems a bit weak-minded and weak willed especially from people who claim that #alllivesmatter. 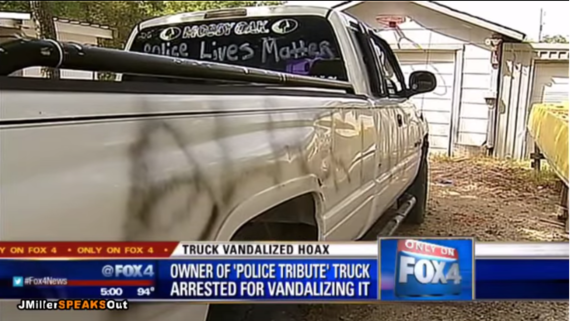 Recently, Scott Lattin defaced his own truck with #blacklivesmatter in order to collect insurance money. He also defaced the truck with several anti-police sentiments and he did it all to essentially frame black people for defacing his property and to further perpetuate the narrative that this is what the #BlackLivesMatter organizers want. To be fair, there have been incidents of vandalism by people who shouted that hashtag, but it's very telling that when Mr. Lattin wanted to defraud his insurance company, that #BlackLivesMatter is who he targets, and of course this is someone who believes that #AllLivesMatter.

Of course everyone's life holds value and we all face our own set of issues and at times they intersect. However, black people were only granted autonomy of their bodies, legally, 152 years ago. Even after that, the lingering impact of slavery exists to this day. We're going to have to have a lot of hard, uncomfortable conversations about race until we can move forward as a society and if you want us to speak less about how black people are targeted for violence, you'll be receptive to these conversations so that maybe one day we no longer feel the need to say that "Black Lives Matter" too.