I don't understand all the cruelty in this world.

There is cruelty at school. Cruelty on the Internet. Cruelty among enemies. Cruelty among "friends." Add it all together, and it can threaten your hope in humanity.

There was a time when I thought I had nothing in common with mean people. They were bad, I was good, and that was the end of the story. But with age and maturity, I've grown to understand that nobody is 100 percent good or 100 percent evil. We are all good and evil, a community of sinners in a fallen, broken world. 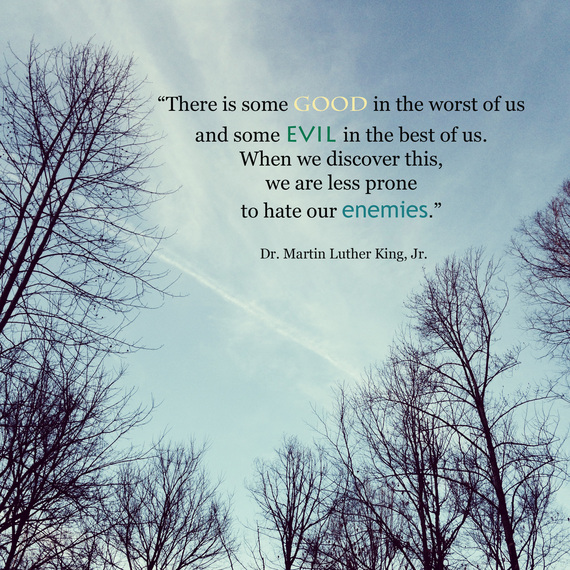 A turning point came years ago when I started writing fiction. After I submitted a partial manuscript to an agent, she pointed out a mistake I'd made that was common among novice writers. In short, I'd made my villain too villainous. She had absolutely no good or redeeming qualities, and since this didn't reflect the reality that no one is "all good" or "all bad," my villain seemed cartoonish and unbelievable.

The best villains, this agent explained, are three-dimensional. They have feelings, emotions and backstories that help explain why they're hateful. The best villains have moments when the audience actually empathizes with them, because as terrible as the villain appears on the surface, there's a different storyline playing in their head. There is pain from the past that has led the villain to this point, where they believe they're justified in whatever they're doing or saying.

So these days when I see vicious remarks on the Internet, or hear about an act of cruelty, I wonder about the backstory of the real-life "villain." I wonder what may have happened to make that person a bully, hater or critic. Because nobody falls into that role haphazardly. Nobody wakes up one day and decides to adopt a negative lifestyle for fun. Hurt people hurt people, and when someone is dumping their hurt onto others, it's a sign that they're desperately trying to get rid of the negative feelings inside them.

Sadly, what begins as one person's inner turmoil can ultimately affect many. As the old expression goes, "The boss yells at the man, and the man goes home and yells at his wife, the wife yells at the kid, and the kid kicks the dog." Until someone breaks the cycle, the hurt keeps getting passed on.

I used to feel nothing but anger for bullies, haters and critics. But now, there's a part of me that feels sad for them. What comes out of a person reflects what's inside, so when someone spends their life looking for things to bash, refusing to see the good in anyone or anything, it reveals the state of their interior. Imagine living in a mental prison of self-hate and vicious self-talk.

Imagine having no escape from cruelty because you can't run away from yourself.

Victims of hate have an escape. They have loving and welcoming arms they can run into, safe places where they can heal, people who want to help them bounce back and restore their self-esteem. But what love exists in the life of a bully, hater or critic? Who wants to be in their inner circle, encouraging them when they're down? Who wants to extend the very thing they need most -- kindness -- when they're so hard to love?

Frankly, I can't think of a more miserable way to live than to be stuck in your own poison (as another saying goes, "My mind is a terrible place to be.") And that's why I feel sorry for bullies, haters and critics. That's why I understand the call we've all been given to love our enemies, because only love can break the spell of hatred.

The answer to meanness is never more meanness. The answer is to look at a hostile person like you might a well-drawn character from a story and ask yourself, "Why are they doing this? What must be going on inside them to make them dump their hurt on me?

And then -- this is the hard part -- your answer is to respond in love. If you can't love that person yet, love someone else. Let the vicious email in your inbox inspire you to write a nice email to a friend. Let the put-down you just heard inspire you to build someone else up. The point is to break the cycle, to turn the tide so you don't spread more harm.

Truth be told, we're all capable of being bullies, haters and critics. We all have mean urges, mean moments, and mean feelings we want to unload sometimes. And if we really want to understand cruel people, all we have to do is look inward. By admitting our worst urges, and things we're tempted to do when we're hurt, we can better understand them.

The message to take away here, for you and me, is this: Be aware of where you dump your hurt. Deal with it in healthy ways instead of randomly releasing it on others. Before writing that email that gives someone a piece of your mind, posting something snarky on social media, or flying into a rage that hurts a child, a spouse, even the family dog, think about why you're so upset. Pray for self-control and a peaceful solution that brings inner harmony instead of turmoil.

The world doesn't need more meanness. What the world needs is more people willing to look past negativity to recognize the root of meanness: Pain.

We were all created to give and receive love. The more love we give, the more we receive, and when we live this way, we create a new cycle, a cycle of love that can trump all evil and pass on joy and hope instead of anger and pain, bringing much-needed light into a dark world.

This post originally appeared on karikampakis.com. Find Kari on Facebook or check out her upcoming book, 10 Ultimate Truths Girls Should Know, to be released by Thomas Nelson in November 2014.