"Woven is a film intended to capture the visual beauty of Ethiopian culture and traditions, rarely depicted in American cinema while also highlighting the importance of the immigrant experience in the fabric of American culture, which we feel is particularly relevant at a time when xenophobia is on the rise."

"Once you make a decision, the universe conspires to make it happen."
― Ralph Waldo Emerson

Every thing happens for a reason.

Whether you believe in miracles, have faith in the power of coincidence or simply agree that life is just a series of open doors for us to explore, the story of WOVEN and the film makers is one that will inspire you to believe in the power of dreams.

I personally met Salome Mulugeta and Nagwa Ibrahim the two female directors and producers by coincidence and since hearing their stories, backgrounds, dreams and passions to bring the story of WOVEN to life, I have been inspired to share it with the world through my eyes. I am not just surprised by their dedication to this movie and its story but also what the movie WOVEN stands for. It's exactly what I believe in and more!

In the following listing, I will humbly share why I think the story of the filmmakers is incredible and why I can't wait to watch WOVEN.

1. The film makers are WOMEN. In a time where Hollywood's Women Problem is at its peak, these two brave women assumed the roles of both the directors and producers of the independent feature film Woven. They are both very proud to see key roles filled by women in an industry where women are underrepresented. They are both empowered women leaders. In fact, they will soon be featured at the @sheisaleader campaign that features aspiring women from the Middle East and the North Africa region for their work and leadership.

2. They are committed to Diversity. In my recent Tedx talk in Munich, Germany, I was inviting people across the globe to celebrate, embrace and appreciate the diversity of our global world. Salome and Nagwa are already ahead of the game! Woven, a film driven by women, celebrates diversity with a cast and crew of all different backgrounds from around the world. The film's story takes the viewer through the journey of seven individuals from seemingly different backgrounds, whose paths converge after a tragic accident in NYC, depicting just how connected we are. In addition, Woven has a diverse crew including Ethiopians, Egyptians, Indians, Dominican Republicans, Iranians, Mexicans, Chinese, Jamaicans, African Americans and Caucasians.

3. They believe in the power of dreams. Woven's story has been twelve years in the making. It started with a dream and an idea. Salome Mulugeta who originally studied broadcasting and journalism in Kansas city was an intern reporter at the local TV station which quickly turned permanent. She later moved to Los Angeles with an idea in mind to write a screenplay. Reporting encouraged her growing passion for a new medium, was drawn to the vibrant cinematic culture and found the challenge exhilarating. While in Los Angeles she met Ryan Spahn an actor and a screenplay writer. The two began to write "Woven." The movie and the two underwent through many challenges as any new filmmaker would have to face. Then over three years ago, Salome and Nagwa randomly met at a dinner party both initially were not going to attend but fate made both of them show up, connect and together bring Woven to fruition. And despite the many challenges along the way from script to screen, as experienced by most independent filmmakers, Salome and Nagwa refused to give up. According to my friend Amandeep Kaur the blogger of Simple Ways to Love Life Blogspot "It took determination, tenacity, the amazingly diverse, collaborative effort of a team of people who worked behind the camera, the love and support of friends and family, and a Dream to complete the film."

"There is no such thing as accident; it is fate misnamed." ― Napoleon Bonaparte

4. They are multi-talented people. Salome Mulugeta (who originally studied Broadcasting and journalism) is the co/director, co/writer, producer and plays the leading role in the film. Post Woven, she has kept herself busy directing and producing commercials and several independent short stories. Her Ethiopian Airlines commercial went viral not very long after it was released. She also currently contributes content for the US based African channel a TV channel that showcases outstanding travel, lifestyle & cultural series, specials, bio's and documentaries into the modern lives of all people of African descent and developing nations who live in the western culture. She has produced and directed shows like The African Restaurant week, Muziki Ni, and is currently directing and hosting a debut show called A Day in the Life Of (2016). Meanwhile, Nagwa Ibrahim is an attorney by training specializing in immigration law and criminal defense, Nagwa additionally worked as a civil and human rights attorney, handling Guantanamo cases and other prisoner rights cases. Through her travels and work as an attorney, she learned about how extraordinary and inspiring the human experience is through the stories of real people, which inspired Nagwa to become a filmmaker where such stories can be heard felt and experienced in one space that transcends borders. Whether as a lawyer or filmmaker, she genuinely loves people and the ways in which we are all intricately connected as human beings. In addition, she is currently co-hosting the Sunday national radio show titled Middle East in Focus on KPFK that discusses news and views on the Middle East and relevant U.S. foreign policy.

How I love these empowered women!

5. Collaboration and Labor of Love. . It's a movement in filmmaking to use a collaborative art form to convey the connectedness of humanity as symbolized both in front of the camera and behind the camera. We see Salome Mulugeta (one of the co-directors and co-producers) as one of the lead characters. In addition, (According to the movie makers) Woven definitely could not have happened without all the cast and crew who worked tirelessly to make the film come alive. Furthermore, the team points out that their own individual communities believed in both of them and helped with funds to get the film of the ground.

6. With different Backgrounds and Experiences, they came together to tell the universal story of Woven. While all what comes to mind when we hear about Egypt and Ethiopia is the longstanding dispute between Egypt and Ethiopia over the construction of Ethiopia's Renaissance Dam along the Nile River or when we hear Coptic-Christian and Muslim is the possible tension that some media outlets try to sell to the world. Both Nagwa (Egyptian-Muslim) and Salome (Ethiopian-Coptic Orthodox Christian) went beyond these differences. In fact, when I asked them about it, they seemed surprised that I am even bringing it up. They even told me that it is something that they never even thought about.

Simply a perfect example of an interfaith and diversity movement in action!

8. Woven Already Has Audiences Awaiting Its Arrival. The interest and public response in WOVEN has been overwhelming. The trailer received more than 27K views in just one day (On EthioTube, the Woven trailer is one of the most watched videos) and the Woven Facebook page has over 6000 followers eagerly waiting for the movie's release. Please continue to follow the movie's Facebook page for more details. 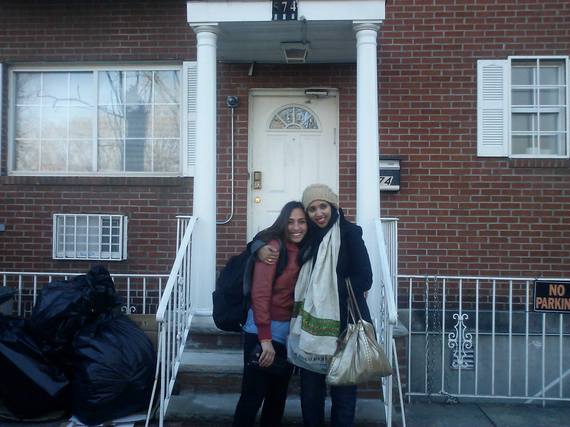 "As female filmmakers and the children of immigrants, Salome being Ethiopian American and Nagwa being Egyptian American, voices and stories like ours are all too often excluded from American cinema, which is why we both became filmmakers and came together to make Woven. With a female led cast and a female led producing and directing team, Woven has been an important passion project which we worked hard to financially, logistically and politically make possible, particularly in an industry where female directors and directors of color are severely underrepresented. Woven is a film intended to capture the visual beauty of Ethiopian culture and traditions, rarely depicted in American cinema while also highlighting the importance of the immigrant experience in the fabric of American culture, which we feel is particularly relevant at a time when xenophobia is on the rise. With a diverse cast and crew from around the world including Ethiopians, Egyptians, Indians, Dominican Republicans, Iranians, Mexicans, Nigerians, Chinese, Jamaicans, African Americans and Caucasians, we wanted to send a powerful message with Woven both in front and behind the camera about the importance of celebrating diversity. Although we had many challenges, we were able to make the dream of Woven into a reality, through the incredible support of our communities here in the U.S. and the community of filmmakers like Hala Lotfy committed to diverse storytelling across borders. With over 6,000 likes on facebook and 1,000,000 views of the Woven trailer on Ethiotube, we are so humbled by the support and excitement for the film's release."

Please watch a full Interview with the Film makers at the Independent Sources CUNY TV, Channel 75.