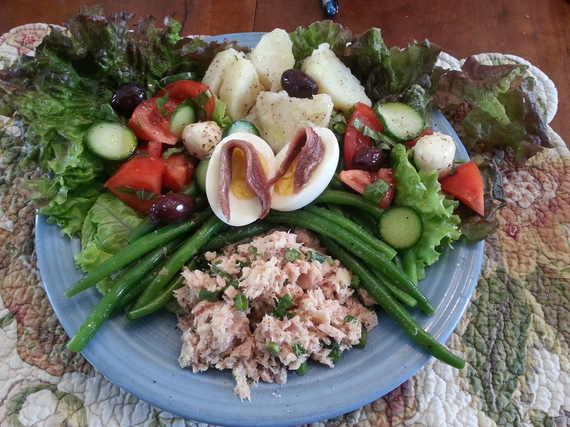 The first time I ever cooked for my husband, Dan, I fed him lasagna made with no-boil noodles and a jar of sauce. The first time he cooked for me, he opened what looked like an empty fridge, produced a smattering of ingredients, and somehow created an entire Chinese feast of pot stickers, stir-fry and veggies.

I should have admitted right then that I couldn't cook. But he married me anyway, and it took me nearly 20 years of marriage -- during which I have melted through pots (even a Le Creuset, once), forgotten to put flour in cake recipes and even set toasters on fire -- before I finally gave up believing that this rudimentary skill was within my capabilities.

"You just don't care about food," Dan points out. "That's why you don't pay attention in the kitchen. You're always cooking by remote control."

It's true that I often leave a pot on simmer and forget all about it until the smoke alarm goes off. But I love food! In fact, after two decades of marriage to this miracle worker in the kitchen, I can scarcely stand to pay money for food in a restaurant because Dan has taught me to recognize the difference between crap and not crap on the table.

I have tried everything to learn to cook. I follow recipes, but somehow there are always steps that trip me up; for instance, the cookbook author might assume that I know how to poach a chicken or what "fold" means. I do try to help my husband and learn from him, yet the art of chopping things in evenly matched cubes or slices eludes me. (In his most generous moments, Dan calls my salads and stews "primitively creative.")

Part of the problem, too, is that I find grocery stores exhausting and intimidating. I treat each trip to the market as an excuse to speed walk and burn some calories. Who doesn't have better things to do than grocery shop? Inevitably, though, that leads me to bring home unpalatable foods like "no salt" crackers, fruit so out of season that it might as well come from Mars, or cuts of meat fit only for my Pekingese.

Dan, on the other hand, goes food shopping the way I shop for books. He surveys the produce with a practiced eye, buying only foods grown locally and in season. He has his own herb garden and has valiantly tried to teach me the difference between all of those plants with little green leaves. (Believe me, you don't know the meaning of the words "primitively creative" until you've sampled my peppermint spaghetti sauce.) But, left to my own devices, I eat like a ten year-old, with mainstays like peanut butter sandwiches and grilled cheese, while Dan is apt to whip up a salad nicoise with seared tuna at a moment's notice.

This winter, in a last-ditch attempt to learn how to cook a healthy meal, I even bought a Groupon coupon for HelloFresh, the food delivery service that not only delivers food to your door for healthy meals, but actually divides out the portions in little containers or bags -- even sending a single scallion, say, or two cute little plastic fish filled with a teaspoon of soy sauce each, to prevent mistakes in measurement. The recipe cards have pictures for every step.

I was in heaven! I made edible food and was stopped from becoming a lifetime HelloFresh convert only when Dan pointed out how much money these meals were costing compared to buying bulk at the store.

"But I want to make meals!" I protested.

He finally took pity on me and did the thing we probably should have done all along: Dan started creating step-by-step weekly menus for me, breaking the recipes down into baby steps compatible with my knowledge base. Most importantly, he ends my involvement in each recipe before it's possible to do any harm. For instance, he'll ask me to get the water ready for the pasta he will throw into it when he gets home, when we make Emeril Lagasse's fettucine with cream sauce, prosciutto and peas.

"I would hate that," one of my friends, a great cook, announced. "He's telling you what to do."

I laughed. "He's telling me what to do only because I asked him to," I said. "That's a big difference."

I still can't claim that I cook. But I can say, with complete confidence, that I can get water ready for pasta, and that my husband loves me for trying.