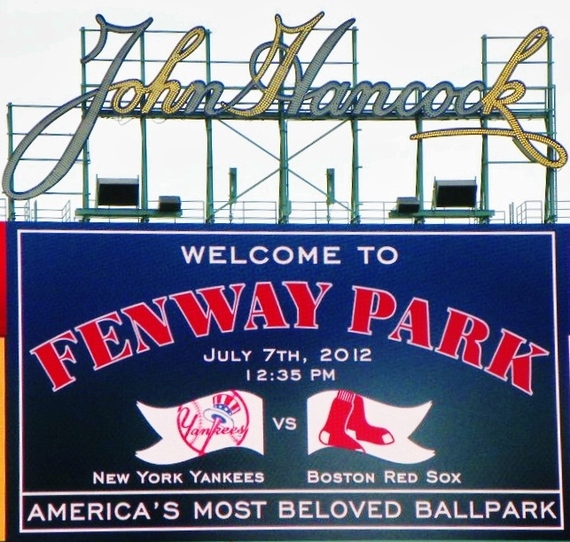 When my wife Diane turned 50 in 2012, we celebrated by going to a baseball park. In the eyes of the world it would have been a historic game. The park was Fenway. The teams were the Red Sox and the Yankees. The game would have been their first match in Fenway's 100th year.

I've never been a sports fan, so normally this wouldn't mean much to me. But there I was, living in Massachusetts where the Sox logo shows up on everything from license plates to ice cream boxes. A place where the Sox are not a team so much as they are a representation of hopes, dreams, and family.

For most of my life, the nearest major sports team was the Buffalo Bills. Their blue and red logo was emblazoned all over the place like it is here, but it wasn't really the same. Part of it is that I wasn't paying attention. A bigger part is that New Englanders are different from Western New Yorkers. And the biggest part is that I was never exposed to the family lure, lore, and love for a team. I had no connection to football or to the Bills, and so I just didn't care.

But I married into fandom.

Diane's family is a Red Sox family. Her dad loved the Sox. He was a military man, which meant that they moved all over the east coast and ended up in the south, but that didn't change a thing. She is the eldest of four daughters, and her best memories of her father are when the Sox were playing. Watching games together was a sacred time and space, when he relaxed and put the irritants of life on hold. Diane's beloved Nana lived in Massachusettes, which increased the magnetism. Her sisters are Sox fans. Her nephews are Sox fans. Her daughters are Sox fans.

For Diane's 50th birthday, I helped her nephew and his wife plan a surprise visit from their home in Florida. They brought tickets for the Yankees game with them. It would be their first trip to Fenway, and their excitement was palpable even over the phone. A few days before their arrival, the park celebrated its 100th anniversary. Diane watched the televised celebration, and I caught bits and pieces while trying to hide the fact that I was preparing for guests. Although I had no connection to Fenway, it was moving to see elderly players mixing with current, to listen to their stories, and to watch fans packing the stadium and hear their cheers.

I tried to get it, but I was busy.

On the day of the game, it rained and didn't stop. Our Florida visitors worked at being cheerful. As game time approached, we decided to head into the city and tour the park, regardless of what was going to happen with the game.

And that's when I started to get it.

Boston was sodden. The rain fell heavier than ever, and the game was called. People in red and blue thronged the wet streets, bitching, cracking jokes, and heading into the gift shop and nearby restaurants. Fans of all ages, shapes and sizes.

We decided to tour the park, and I watched the excitement of Diane and her loved ones as they passed by Ted Williams' red seat, gazed out from the top of the Green Monster, and looked at 100 years of balls, bats, and uniforms. I listened as they replayed moments from famous games.

At the end of the tour, a young man took the tour guide's microphone and made an announcement. He'd planned to pop the question during the game, but his plans were also rained out. His girlfriend walked to where he stood with a Red Sox cap perched atop her cute little head, and tears running down her cheeks. She accepted the ring he offered. The rest of us burst into applause and cheers.

There was a surreal unity among those of us on the tour. We didn't know each other, yet were somehow kin. I expected it to be kitschy, and maybe it was. I expected to be bored, and I wasn't. I didn't expect it to be moving, and yet it's something I'll never forget.

I still can't call myself a fan. I wasn't born and raised to follow sports. But after that visit to Fenway, I was one step closer to getting it.