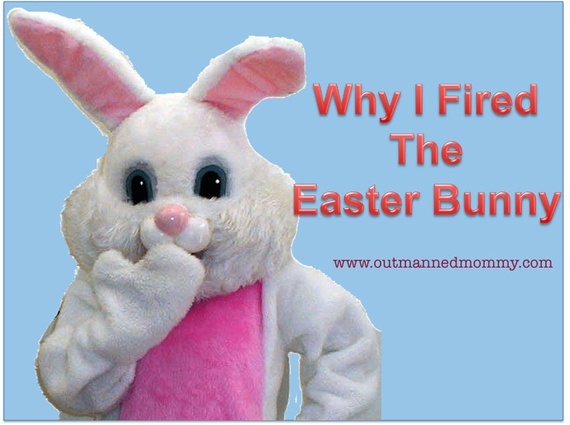 Tonight, I fired the Easter Bunny.

Let's be honest, as far as holiday mascots go, he's doesn't really have the goods to back up his story. Santa is the king of enchanted holiday creatures. He has his deceit down to a science and thanks to the help of the various time zones across the world, and just a sprinkling of magic, his legend remains sacred well into a child's school years.

Imposters like the Easter Bunny only cheapen Santa's appeal and make it harder to sell to children. At least the Tooth Fairy gives out money. As any good lobbyist knows, with the right bribe you can make people believe ANYTHING. Cadbury's Cream Eggs, on the other hand, are somewhat less persuasive. In fact, the whole giant rabbit hiding plastic eggs filled with candy story is full of holes.

Frankly, I don't want my kids thinking rabbits lay eggs full of chocolate. I'm convinced the Easter Bunny was at least partially responsible for the fact that my two-year-old thought everything hatched from eggs for almost a year. He was very confused when his baby brother did not break out of a colorful shell. You try explaining to a toddler why rabbits lay eggs at Easter but baby bunnies do not hatch from them.

I have a hard enough time explaining how Santa squeezes his portly gut through our very narrow chimney. I'm a sleep-deprived mother, fictitious physics and magical biology require the use of brain cells I desperately need for basic functions like making coffee. Using the phrase "it's just magic" loses a its power when I say it every time Hallmark and Cadbury's decide to bankroll another holiday. "Mommy and Daddy hide eggs for you on Easter because it's fun" is a much easier explanation.

And I can't be the only person who finds the giant Easter Bunny a tad bit creepy. A grown man hippity-hopping around the mall dressed head to toe in a bunny costume asking little children to sit on his lap so he can take their picture would be grounds for a restraining order any other time of the year. Sure, Santa gets away with it, but it's really not for everyone. I mean, you never see leprechauns holding court in shopping centers around St Patrick's Day, or turkey petting zoos in the parking lots around Thanksgiving. Thank goodness.

Now, don't get me wrong. I am definitely not above lying to my children. Unfortunately, I can only keep so many lies straight in my head at one time so I prefer to reserve them for the ones that make my life easier. Such as:

If you're good and do everything mommy says Santa will bring you presents.

If you keep making that face it will stick that way.

The fish we flushed is now living happily in the ocean with Nemo.

And my personal favorite

That's not the sun, it's just a really bright moon. Now go back to bed!

What does the Easter Bunny have to offer me? Fatter thighs thanks to the copious amount of chocolate I will steal from my three year old? Cavities? Children hopped up on sugar for the next month? Marshmallow Peeps? No thank you. I prefer my lies to be self-serving.

So this year, my husband and I made the executive decision that we would no longer be requiring the services of Mr. Bunny. We will henceforth be performing all egg hiding duties ourselves and outsourcing chocolate acquisitions to Grandma. Our holiday celebrations feel lighter and more streamlined. I no longer have to sneak enormous bags of chocolate, or hundreds of plastic eggs into the shopping cart under the ever-watchful eye of my three-year-old.

There's no more spelling words like EGG, HIDE, and CHOCOLATE when discussing Easter Eve strategies with my husband. Besides, the three-year-old can spell now, so I was going to have to start learning Spanish in order to fool him next year. Who has time for that?

I'm sure there are some people out there who will balk at our decision to let the Easter Bunny go. Some people will accuse us of destroying the magic of childhood. Others will worry for the financial security of Mr. Bunny now that he is no longer gainfully employed. How will he feed his hundreds of children? Hopefully at least some of you will cheer us on and wish us a Happy Easter despite our philosophical differences.

And if not, I'll just ply you with chocolate and marshmallow peeps until you like me again.