In Robert Birk's 8th-grade English class, his students read The Life and Times of Frederick Douglass. The abolitionist's powerful autobiography tells of Douglass' escape from slavery and life as a free man, overcoming obstacles to become an influential writer and statesmen. This year, Birk decided to bring more to the lesson.

"A teachable moment comes when something happens in the classroom that allows for a meaningful conversation," Birk says. "It's a moment that's an opportunity to learn." The teacher in Potomac, Maryland, wanted his students to learn about the existence of modern slavery. He wanted to give his students the chance to explore Douglass' personal experiences in the context of slavery today.

Teaching modern slavery is important to Birk because it's an injustice that resonates with young people--he believes students need to learn meaningful things in order to be motivated to learn. "Modern slavery sparks the curiosity, the passion, the frustration of these students," he says. "When they find that it exists, they are upset, and they want to do something about it."

The reaction Birk saw most from his students was shock. "It was one of those revelatory moments," he recalls. "When I said, 'There are more slaves today than during the time when the U.S. legalized slavery,' their jaws dropped." Many people the world over do not know that slavery still exists, even though it is illegal everywhere.

Freeing One Community at a Time

Birk's goal was simply to introduce his pupils to modern slavery and invite them to think about it. He decided his duty was not only to instruct and inform but also to set an example. Together, Birk and his class started a fundraising campaign. Birk was the first person to give.

The students quickly raised the funds, donating babysitting money, and money they had saved up for new clothes. No parent contributions were allowed. "I wanted them to make the choice to sacrifice to help someone else be free," Birk says. "And they did that. When the students started bringing in overwhelming amounts of money, I thought, 'There's something to this.'"

But Birk's students wanted to do even more. He didn't push or force them. He insists he was only giving them the chance to accomplish great things. When he first presented his modern slavery lesson, he didn't know how his kids would respond, and they responded passionately. Soon it was the students leading the fundraising effort. After freeing an entire village, they decided to free two. In a few days, Birk's class donated $4,200 to help FTS free slaves. Then they decided to contribute more than money. 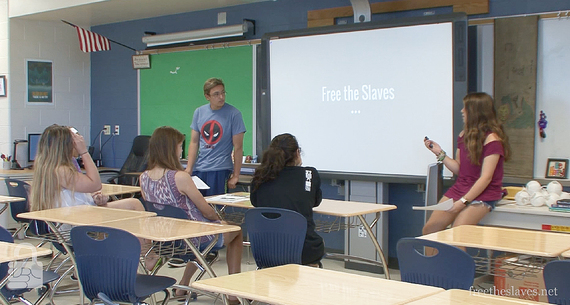 From Lesson to Fundraiser to Movement

After the fundraising success, Birk found himself coaching his students, at their insistence, to give talks and lead discussions on slavery and FTS. "We wanted to raise awareness throughout the school and our community," says student Niamh Haynos. "We decided to make presentations, displays, and posters to raise awareness." They put up artwork in the cafeteria. They spoke to fellow 8th graders: imparting information, planting the seeds of an idea, sharing opportunities to help free slaves--just like their proud teacher had done for them.

"I'm constantly trying to make connections for my students, making them aware of how literature can shape who we are and how we understand the world," Birk says. "It can also show us how other people understand the world." A few years ago he went to India for the first time. He saw the poverty, the poor living conditions, especially in rural areas, and he was devastated. When he learned how prevalent slavery is in India, he was heartbroken. But he also knew it was something he and his students could do something about.

"Being able to help free slaves is indescribable," says student Gao Xing Cosgrove. "Just to know that you're helping one human being is the best feeling in the world."

Birk's teaching style is warm, supportive, calm, and hopeful. His evolution to activist set Birk free to be a more honest, engaged educator for his pupils. He calls them his "beloved students." His message is: "Speak from the heart. Be bold; be passionate; be excited. You care about these things--let that show."

This generation of students has more access to information and social media than ever before. Birk believes his role as a teacher is not to be the sole source of knowledge but to create a space for his students to generate ideas on their own. "You don't even have to donate," says student Madison Cuthbert. "If you just help spread the word, it'll definitely help others in slavery all over the world." 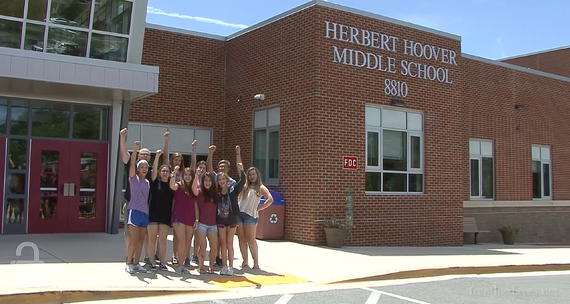 Birk is surprised by the effect the fundraising and outreach successes have had on his class, and himself. Several disengaged, indifferent students sit now at the front of the classroom, participating and being excited about learning. His most dedicated students continue to pay it forward as anti-slavery activists, recruiting more 8th graders to the cause.

"That kind of empowerment is so needed," Birk says. "That's a dream come true for a teacher. It's been a beautiful, powerful, inspiring experience." Birk thought, after the fundraising ended, his students would move on to something else. But they didn't. Their activism endured.

Today the teacher and his students are among FTS' most inspiring contributors. The discovery of modern slavery and its horrors changed them all: made them more global-minded, more appreciative of what they had, and more empathetic toward others.

"Imagine life in their shoes," says student Nikka Givpoor. "Imagine what they have to do. I thought it was totally done. I didn't even know the full meaning of slavery until I got involved in this. Mr. Birk taught me everything I know." Student Niamh Haynos adds, "No human should be subjected to torture like that. Just one small change can help so many people."

Birk knows he isn't the same person as when he started teaching his anti-slavery lesson. He dreams about the moment a slave is set free, about the possibilities that suddenly await that single person. "People are good," he says. "People are worthwhile. I get excited thinking about people experiencing freedom for the first time. I free slaves because it's something I can do."

See other inspiring profiles in our special "Why I Free Slaves" film series here.