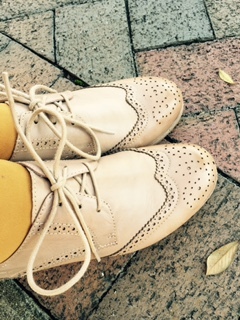 The market, it falls, it soars, it corrects.

How's this for correction? During family dinnertime I make fun, as I do, of a frequent post-er on social media, calling his encouraging (but nonetheless annoying) affirmations "cheesy." I now declare you ridiculous, bam! For me, all in an evening's work. Now, sweet things, let's take a load of dishes to the sink.

Fast forward 24 hours, when a teenaged daughter cries that she holds back from sharing her heart because I might use the "ch" word. Yikes. We aren't Catholic, but I decide for Lent I'm abstaining from insults and digs, mocking and malice. Cold turkey, I'm giving mankind a break. (No, I don't plan to binge on Easter -- did you see her hat? What about those shoes?)

A companion Lenten resolution: total withdrawal from Facebook. FB is where the four-fifths of my brain that does the judging kicks into high gear.

Even if you aren't religious, there's a season for everything: the anticipation of Advent, the holy hedonism of Christmas, January's short-lived swing back to kale and kickboxing class. Perhaps it's appropriate that Lent follows failed attempts at healthier habits. Lent is something more. Lent is for leaning.

By mid-afternoon Ash Wednesday, I'm already leaning pretty hard. Help me shut up and just smile pretty. I've learned through the years that Lent is not about perfect sacrifice (look what I can do, Lord!) but a constant reminder that I require divine assistance.

The cynicism had gotten out of hand -- though, as far as I know, I haven't lost any friends over it (yet). But one dear one reminded me recently, "Remember when you used to say everyone is doing the best they can with what they have?"

Yep, I remember. I must've been drunk -- or over-caffeinated. If this is everyone's best, everyone better step it up. Slipping into self-righteousness is like putting my oxfords on in the morning -- they are my default shoes.

It was time for a change.

To seal the deal (as if swearing to God wasn't enough), the Sunday before Lent starts, I disclose my strategy with a friend via text. I'm stopping the snark, I tell her.

She replies, most un-snarkily: Yes. We will all be living together someday!

At this, I find myself throwing up inside my mouth a little. I think about the woman filing her long nails during the morning's church service -- scratch, scratch. And the guy three rows over who punctuates the sermon points by bleating amen! To be honest, I am hoping for more of an Episcopal atmosphere in the afterlife. Polite head-bows rather than hand-raising. And deodorant for all! Suddenly I panic: Will my maker respect my need for alone time?

I realize it is going to be a long forty days.

On Fat Tuesday, I party at home in my pjs with cocoa and a chapter on, of all things, judgment, written by Brene Brown, America's shame researcher, in her latest bestseller, Rising Strong. Brown explores the attitudes of judgey vs. gracious types and discovers the obvious but overlooked: it's nearly impossible to be kinder and gentler with folks when you're so freaking relentless with yourself. So that's why I'm so snarky.

I've been down this road before, and I'm here to tell you that issuing yourself a pass to be less than perfect sounds nice until you try it. You breathe deep and go easy. Maybe you rip up your to-do list or skip mascara for a whole week. But then you forget something semi-important or make a mess or hurt somebody, and you come back down on you, banging your skull against the nearest wall. You note this does not hurt, as your head is so thick. Exasperated for simultaneously self-injuring and calling yourself names, you remember: take a deep breath...

I started to get serious about unwinding a lifetime of earning A's for effort after I had kids -- something had to give. I tried to cultivate patience, going with the flow. I tried some more. I tried really, really hard.

Those were my thirties, the try hard decade.

Now I'm in my mid-forties, an age when I think a lot of us gain a modicum of sense -- or run out of juice -- or both. You look around (or in the mirror) and tell yourself it is what it is.

I'm doing the best I can.

As for everyone else, I cannot be metaphysically certain they're doing the best they can. But I know this: I get along in this world better giving them the benefit of the doubt, without the tallying of right vs. wrong, smart vs. silly, good vs. poor fashion choices.

So we're a few weeks into Lent, and the planet's still turning, sans my running commentary. I start to feel something shift.

I have a long way to go, but already I'm stepping lighter. Which is an excellent sign that I'm not carrying the load all on my own.

The other night, my tender daughter tells me about a contemporary Christian song she loves. I'm not a CCM girl, but I ask her to play it for me.

I close my eyes and listen. When it's finished, I tell her I like it. And I do.