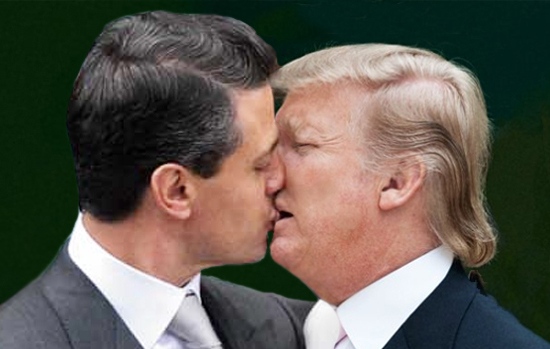 There are a lot of reasons why I despise the fact that Trump is visiting Mexico. There are the obvious ones, such as the guy's complete disrespect to the country and its people, and then there's those that aren't quite so obvious and a lot more offending.

The main reason I hate the fact that Trump is meeting with President Enrique Peña Nieto is not exactly because I hate Trump and all that he represents (racism, stereotyping, hate and authoritarianism), but because my country's president is such an idiot, corrupt human being that he may end up offering to build the wall and pay for it as long as there is something in it for him personally.

Peña Nieto has been involved in a number of scandals that reflect his corrupt, shady modus operandi, most recently the revelation that he plagiarized part of his law degree thesis. His popularity and ratings amongst the Mexican people have declined since the first day he took office. He has failed to show his face to explain horrible massacres and drug lord escapes. Hell, the guy barely knows the capitals of the states in Mexico.

You could say the Mexican President is a huge disappointment, but what Trump's visit feels like hurts even more. It feels like treason.

Not only did Peña fail to timely address Trump's comments on Mexican immigrants and the threats he's been sending regarding the wall all throughout his campaign, now he invites the man into our country. I just hope that he was properly prepared to deal with Trump's irrational ways. I hope he said to him privately everything he should have said publicly when Trump called Mexicans rapists. I hope he showed Trump that walls are already at the Mexico-US border and made him understand that they don't work. I hope he emphasized on the fact that the United States and Mexico need to work in unison against drug trafficking and consumption, for as long as there's demand in the US there's going to be criminals crossing the border to supply such demand. The problem is our president is not smart enough. And worst of all, I don't think there's a genuine interest on Peña's part to do this. I strongly believe that he will end up doing whatever is best for him and not for the country he is supposed to be serving.

The fact that Peña's Administration did not announce Trump's visit until after Trump's campaign did speaks volumes as to what are the Mexican president's priorities. Trump has planted seeds in the American people that we've been fighting against for decades. Why invite anyone with those kinds of beliefs into the country he has been using as an example to promote such hateful rhetoric?

I hate that Trump is in Mexico. As a Mexican who LEGALLY lived in the US for almost six years and as the mother of two American citizens, I hate the fact that Peña and Trump's meeting feels like two evils joining against the interest of the people.

Mexico is a country with such potential that despite having an incompetent and corrupt president, its economy is growing faster than the US and Canada's. I think it'd be in all of our interests to have Mexico continue to grow its partnership with the US so for everyone's sake please, please, don't allow Trump to become president.