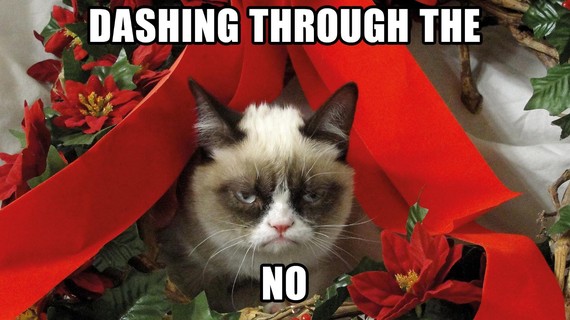 Call me a Grinch, call me a Scrooge, call me whatever you want, it will never change how I feel about Christmas. I hate Christmas. And this is coming from the guy who hates nothing... except Christmas.

Getting together with family is great, and spreading joy and goodness will never hurt anyone, but when it is veiled by the persistent greed of American consumerism those well-wishes become tainted. Everything about the "holiday spirit" is nothing but a way to drive post-modern consumerism down the throats of people who've maxed out their credit cards to buy the latest piece of shit on their kids' wish-lists.

Admit it, you get excited for Black Friday, you might even line up early for the sales. But that is what is wrong with Christmas. When did it become normal to wait in line for days in front of a store just to get 20 percent off a TV? And, if the season is about giving and being humble, how does one justify that when they are trampling people and fighting to rush through the lanes at Target? It doesn't.

An even better reason for my hatred of this blatant ripoff of pagan rituals that there is so much pressure, such a big push to spend, spend, spend, and so little to give, give, give. Imagine what the world would look like if even a fraction of that money spent on Christmas crap went to improving the lives of others, say the homeless or mentally ill? There would be such a great uplifting communities everywhere, and that would truly be the season of giving.

Though, to be fair, it's not just the spending and shopping and greed that irk me. I cannot stand how fake people get this time of year. Yes, fake. Your coworkers, who hate you, give you Christmas cards, you need to make sure you get that nagging boss a gift, even those Trump-supporting relatives you blocked on Facebook send you some kind of something that relates to Jesus, or guns. Probably a family portrait in front of a lake while they all hold their Christmas gifts, more guns, proudly in front of a nativity scene, or something. And, of course, you need to send one back, because really that's why the originals were sent to you: people want to get Christmas cards back.

The other day I heard a couple talking about how they had only received two Christmas cards this year. Only two. When did it become a competition, and when did it become obligatory to send as many cards to the most people as possible? Probably around the same time likes began to equate friendship.

Then again, my grandmother pulled me aside recently and asked who I was sending cards to. I responded with my normal lackluster answer, that I don't send cards out. The look on her face was riveting, she genuinely looked as if I had spit in her face.

But it's not really just the cards, it's the sickening facade they represent. No, I don't want to send someone I can't stand a fucking card, and I don't want one from them either. In all honesty I'd rather accept that we feel the same about each other during the holidays as we do during the rest of the year.

I guess, if that were the worst of it I could maybe stand the yuletide season. It isn't. By far the worst thing about the holiday is the tinsel. I don't mean the shimmery crap you put on the tree, I'm talking about decorations and sweaters and lights and music. Yup, I hate it. When Halloween rolls around, you start seeing the red and green pop up in stores and ads. Some people even start listening to Christmas music mid October. What the fuck? And as for sweaters, I may not be the most fashion forward homo but even I know how ugly those things are.

People have sweaters with lights built in, Santa and elves, reindeer, trees, and tacky patterns of green, red, and white. Please burn them, preferably in the fires of hell where they can burden humanity no more. And those head accessories, they can burn too. Am I a Grinch for being bothered by Christmas, sure, why not?

Perhaps being a Grinch just means that I am not blinded by the LED lights that cover most American yards, so I can actually see Christmas for what it really is: something far from the pagan rituals it was based on. Even the concept of kindness, love, and giving are lost in the haze of greed, entitlement, and pride. Looking around, I don't see good people. All I see is the next sale at Walmart, and an application for a Target Red card that will save you five percent. Still don't believe me? Just wait for the "after Christmas" sales and then tell me that this is the season of giving, not purchasing.