In a society where people are increasingly putting dogs in strollers and children on leashes, you would think that there would be equal if not greater importance placed on choosing a pet's name. What will people think if your pooch has a large brown spot around his left eye and you tell them the story of how you gazed at him adoringly amongst a litter of eight and exclaimed, "That's the one for me and I shall name him 'Spot!'" This is a sad, anticlimactic tale proving unequivocally that you lack any imagination. A sense of irony is always best when choosing a pet name. For example, if you adopted a ZEBRA and named it 'Spot', then you immediately become someone of great interest! When I lived in Atlanta, I met at least 10 girls who had named their dog some variation of Elle or Ella, meaning 'she' or sometimes they got slightly more imaginative and went for Belle or Bella, meaning 'beautiful.' What did these names say about them? Were they all masters of Latin languages as the names suggested or had their parents sent them to Semester at Sea only to return with a fake Prada, a flask of Limoncello and a half-witted idea for a dog name? 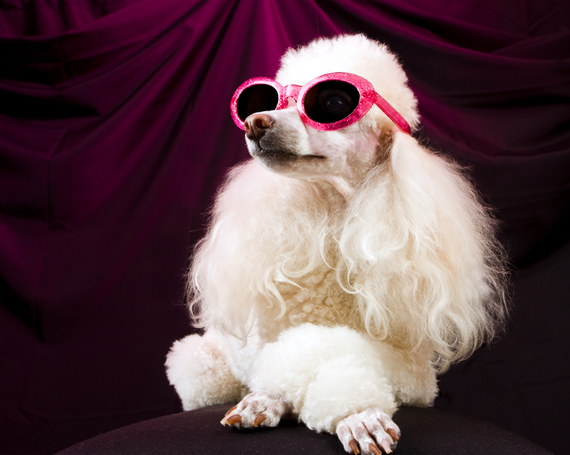 And if not a linguist, I wanted to ask one of these girls, "How did you come up with that name? Did Southern Evangelicals help you come up with it using literal interpretation after they told you the earth was flat and sits on pillars?" What did that decision-making process look like? "Hmmm, well my dog is a FEMALE and I think she is so PRETTY so I'm going to name her either 'she' or 'beautiful' in another language and I will love it until the Apocalypse, which is soon, or until Jesus is resurrected and shows up at my front door selling girl scout cookies, which could ALSO be soon." Or did they hold a gun to your head at the vet when you brought it in for a rabies shot and demand you name it there on the spot for the sake of their filing system? Then, fearing for your life, you suddenly remembered ONE pronoun in Spanish. You probably give more consideration to separating the mascara on your eyelashes in the morning. It would be more interesting if you had just named the dog, 'Dog' or if you hadn't named it at all and just let people engage in self-expression by calling it whatever they felt like in the moment, "Sit Fido, Lucky, Crotch-sniffer, or Wombat," or "Fetch Jackalope, Spanx-eater, Pink Fairy Armadillo or Naked Mole Rat. Good dog! Now here's a biscotti."

I had been thinking of getting a King Charles Spaniel and wanted to name it Salvatore but the owner of one of the dogs named 'Ella' told me that little dogs named things like 'Salvatore' didn't attract men. This was good to know because attracting men was my sole objective for wanting to adopt a living thing and invite it to take over my home with all of its fleas, heart worm pills, and vet bills, that I would have to walk twice a day and who would drastically cut into my ability to ever take a vacation again, a MINOR sacrifice to pay for something that was going to make it rain men in my apartment just like Gloria Gaynor promised.

Evidently, her dog, 'Ella' attracted more men than Marilyn Monroe did with her skirt blowing up from a blast through a subway vent. I didn't understand how this was possible because Ella was just a golden lab whose prize quality was that she was a 'she', or according to Guadalajarans anyway. My friend embellished on her theory that men liked BIG dogs like Ella and that is why she had a boyfriend and I didn't. Oh, it all makes sense now. I thought it was because I still wore a training bra or because my dentist had scolded me for not flossing my teeth enough or because I wasn't 'bella' enough, but all this time it was because I didn't have a Labrador that spoke Spanish who would fetch rich caballeros for me at the doggie park.

I joked to my friend that perhaps the humane society would let me test dogs at her park one day to see which ones attracted the most men or perhaps I could just get them to include an indemnity clause in my pet adoption papers the way 50 year old men probably negotiated for Ferraris. "I accept this dog with the condition that there is a Javier Bardem lookalike in my bed in 30 days or less, or my money back"...or something like that. My friend listened earnestly and thought it sounded like a great idea. I continued, "and when I adopt this mutt with the indemnity clause, I don't think I'm going to name it 'he' or 'she' in ANY other language because I really don't like to discriminate based on gender so I would either want to give it a symbol like the artist formerly known as Prince or I could just name the dog "It" and defend its lack of imagination by claiming I saw a striking resemblance between my pup and the clown in that Stephen King movie from the '80s.

'It' could be dangerous though, I suddenly thought. What if I got a bad review on a dating site because of the dog and then people might think 'It' was something gross like a venereal disease. I imagined this feedback on dontdatethatgirl.com, "I spent the night with this girl I met in the park the other day and she had 'It.' Normally I don't mind when girls live with things like 'It' because that usually means they don't like to eat out a lot because "It" could act up in a restaurant but when 'It' growls angrily at your face or 'It' leaves a stain on your Brooks Brothers shirt then all of a sudden 'It' becomes a big deal. If you meet this girl and she still has 'It,' I would stay the hell away." Maybe Wombat wasn't such a bad name after all.

Admittedly, I HAD given a bad pet name ONCE before but I was only 3 years old. I named my first cocker spaniel 'Cuddles' because she was tiny and slept in my lap all day and when you are 3 everything is a literal interpretation since you are still pointing at things like apples and saying 'RED!' as if it was a MAJOR epiphany. My dad set me straight immediately and bullied me into proper pet-naming submission. He agreed that because of my age, I was allowed this stupid mistake and the dog could keep its name but he said that he refused to yell for 'Cuddles' out the back door of the house if she went missing. If Cuddles got lost, I was on my own. Not wanting future pets to go missing, I named them all so that Dad could yell out the back door for a baseball team. I gave them popular, white male names with four letters or less: a golden retriever named Bob, a horse named Pete, a cat named Jake, another cat named Hal and a mutt named Beau. Dad explained they might have been dull names on their own but that they became great names once there were MULTIPLE pets with dull names. This was called IRONY.

I was once invited on a luxurious vacation due to a Parisian dog that believed his clever name made him canine royalty and used it to break through social barriers living by the philosophy, "Never ask permission, only forgiveness." He was a black, standard poodle owned by my best friend who named him Othello, a clever Shakespearian homage and an easy, albeit elitist way of making new friends with others who had fabulous taste in dog names. Due to Othello's charming name and his decision to charge into the Dominican embassy for a plate of foie gras one day, we were invited to Santo Domingo to stay with a family we met there who claimed they dominated the island. Feeling adventurous, we accepted their invitation and once we arrived, we were escorted through customs by an entourage that would've shamed Beyoncé. We spent our initial dinner watching the family matriarch ferociously debate island politics on her cell phone while she paced back and forth in the living room followed by 3 English bulldogs all named after Latin American dictators. As she hung up the phone, she turned to us in her Cavalli caftan, apologized for the delay and introduced us to Somoza, Pinochet and Castro, who all had seats at the dinner table and also enjoyed a delicious foie gras. She continued, "Welcome to my home. I hope you enjoy your time in the Dominican Republic and as we like to say in Spanish, Mi casa es su casa, which means... I interrupted, "I know what it means!" eager to show off my BASIC Spanish. She smiled, "You do?" I boasted, "Yes! I was once a dog sitter for a Labrador named Ella and she taught me."

* All characters (including dogs) appearing in this work are fictitious. Any resemblance to real persons (or dogs), living or dead, is purely coincidental.