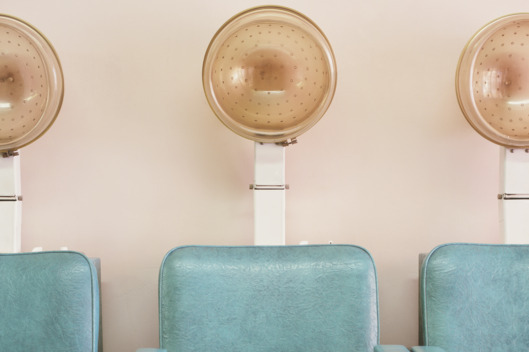 On New Year's Eve, the thirstiest day of the year and therefore one of the most lucrative for beauty businesses, I paid $55 at a three-chaired Dominican salon for a mediocre blowout and an uneven trim. My roommate had to take her scissors out to fix it minutes before we left for a party, but still, I would argue I got more than I paid for. You can't put a dollar value on these things: Three and a half hours of brushing up on Spanish; listening to merengue and old wives' tales (your hair will grow longer if a pregnant lady cuts it); not feeling like an outsider, completely.

In college, someone asked me if I scalped a Japanese girl, like it was supposed to be a compliment. She went to school in the South, and because she had a lot of black friends but had never seen anyone who looked like me, she figured I must be wearing a weave. Maybe another Dominican would be flattered, because many wear their long, straight hair as a badge of honor -- to defend their racially mixed heritage, and deny blackness. My own grandfather credits our soft, silky manes to indigenous DNA, a claim of which I'm skeptical.

The last census found 73 percent of the country's population is of mixed African and European descent, yet many neglect to address their kinky roots. In 1937, former dictator Rafael Trujillo managed to play up the culture's ties to colonial Spain as a mechanism to justify Haitian genocide. Trujillo's attempt to cleanse the population manifested itself in white beauty ideals, and the rejection of natural hair stuck. Eighty percent of the current Dominican population has West and Central African blood, according to a study conducted by CUNY, yet the country's issues with racism linger. Thousands of Dominican Haitians were deported in last year's immigration crisis.

But on the hair front, at least, things are looking up. Some Dominicans are finally embracing their curls. In 2015, the first natural hair salon opened in Santo Domingo. Natural hair has even started appearing on the runway, with models like Lineisy Montero spearheading the trend.

I love street-style star Julia Sarr-Jamois, and model Imaan Hammam is all over my beauty Pinterest board, but I've been getting my hair blown out since the ripe old age of 4. That's probably also when I had my hair chemically straightened with toxic lye for the first time -- which should be illegal, by the way.

"You didn't fix your hair?" my grandmother will ask if you dare show up on Christmas with locks that look the way they grow out of your head. Friends, usually white, wonder why I roll my eyes and get defensive when they insist I go curly more often. Growing up, I was never encouraged to wear it down and let it be. It's never felt natural to me.

Not even the '60s theme of my New Year's Eve affair got me to tease my hair into a fro. In communities with a Dominican population, it's not too hard to find an affordable salon that will give you pin-straight hair, kept intact with a doobie -- not a joint, but the hairstyle Rihanna wore to the American Music Awards. In her superstitious Dominican way, my mother was convinced washing my hair regularly would make me sick. For much of my youth, my hair was bunched up in a messy topknot. Back then, it was not a deliberate status symbol of lazy cool.

Related: 3 Natural Ingredients You Probably Never Thought About Putting on Your Hair

That day, the owner of the salon shook her head and refused to provide service to a white girl who came in for a French braid. "The Americans always want buns and braids," she sighed.

I seldom get my hair done at non-Dominican salons. They usually make me feel judged, and I'll walk away with a degree of regret deeper than anyone usually feels about bad bangs or misplaced layers. Once, at a salon downtown, the hairdresser asked me how I found out about the place in a tone that made me feel some type of way. The truth is that it had been featured on a biracial fashion blogger's site. (In hindsight, I realize she was probably paid to promote the spot.)

Maybe the hairdresser's tone was condescending in nature; maybe I had projected my own insecurity onto his question. When a stylist isn't of color, or doesn't have similarly textured hair, I find myself apologizing nervously. My hair is so thick, sorry. But what I'm really saying is, Sorry, I'm not white.

Only a few weeks before New Year's, I had my first experience at Dry Bar, a franchise salon that serves you an early-2000s version of Sex and the City luxury, complete with complimentary Champagne and Kelly Clarkson overhead. Not that I'd ever admit it out loud, but the concept always both appealed to me and intimidated me, on the assumption that no one at such a commercial place would be equipped to tackle my rat's nest. But our beauty editor was giving up a gift card because they always give her barrel curls, so I figured, why not?

When I booked the appointment, I gave an exaggerated description of my extremely dry, curly, damaged hair. The subtext: Be prepared when Lion Babe walks through the door. But then it turned out that my stylist was black. I relaxed, finally, and left feeling brand-new.

Even when I step into a Dominican salon and they address me in English because they assume I'm African-American, I feel at home. The other women look like me; I understand their language and references. Somehow this sense of belonging and cultural experience feels worth the heat damage, the antiquated process of sitting under a hair dryer for an hour, the painful steps with different tools.

Related: Zendaya on How to Love Yourself and Your Hair

It's possible to find salons where stylists who are not of color know how to work with all kinds of textures. But honestly, I don't really care to give them my money. There needs to be a bigger, more obvious push across the market to make customers like me feel they're not a problem, or more difficult to work with, based on a genetic trait that's out of their control. Is that so much to ask, especially when you're paying for a service?

Maybe the solution is integrating how to work with natural hair into the mandatory beauty-school curriculum. Maybe it's as simple as hanging signs in salons acknowledging they don't discriminate, like those Hippies Always Welcome ones you see around beach towns.

Even at the top, there's work to be done. A few years ago, black model Jourdan Dunn took to Twitter to air her grievances about how she'd been treated backstage at a Giambattista Valli fashion show: "I swear some people need to learn how to do black hair/skin!"

Since then, a Dry Bar-type salon for natural hair has opened in New York City, and there are places, like Devachan, that make curly haired women feel like queens. But I don't want to seek out such niche establishments, especially when your average salon still sometimes charges an additional fee -- the unofficial but very real black tax.

I'll continue to support businesses that feel safe, even if they're not very glamorous, until there isn't such a wide disconnect between how we treat white and non-white hair.

That December 31, I sunk into a chair in a narrow hallway without a window while a young woman pulled my head down into the sink. I let her shame me into getting the deep condition to treat my split ends, and wash away any guilt I had for perpetuating oppressive beauty standards, simply by being there.

I didn't let it faze me that they were out of hot water, or that she was using cheap shampoo. Maybe it was the blaring bachata that drowned out any concerns I should've had. Whatever it was, I knew I'd be back. We barely exchanged more than a few sentences, but I knew she understood why I wasn't ready to be the girl with big, curly hair -- not just yet.

More from The Cut:
The Story Behind Beyoncé's Lemonade Braids
What Makes Kim Kardashian's Hair Look So Good?
How to Deal With Your Hair After the Gym
The 10 Best Bridal Looks From the Spring Shows
The 50 Most Iconic Hairstyles of All Time