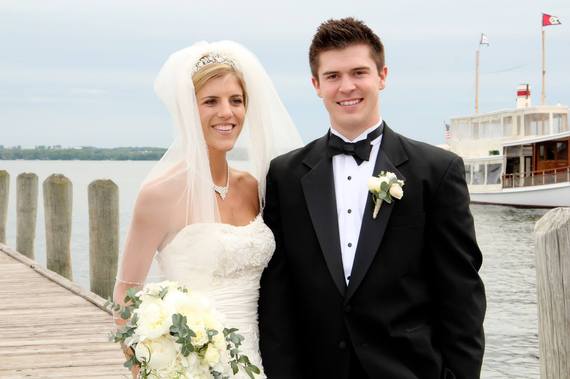 Romanticizing the name change
Girls begin doodling their names with their prospective husband's names long before they actually ever really know a man, usually in elementary school (or was that just me?). I had perfected my loopy cursive signature "Lindsay Morris" (after adorable heartthrob Zach Morris), and covered my Lisa Frank folders with a slew of other intended future names.

When a woman gets married, her last name changes. In order to promote a single family unit, carry on the American tradition, and show allegiance to your husband, women change their names. It's a very nice sentiment and certainly one I will not criticize -- every woman is entitled to her choice. However, since this is the most widely accepted behavior, I will not spend time promoting nor defending this tradition -- society and my uber conventional family forcefully advocate this tradition enough.

Questioning tradition
When I was getting married, I assumed I would change my last name. My husband has a great last name; it didn't rhyme with my name nor was it too difficult to pronounce or spell. When our two year engagement was getting down to the wire though, I realized I actually had to make this commitment, which is when I did something really dangerous. Get ready for this, and don't say I didn't warn you: I thought about the decision to change my name.

"WHAT?!" you're asking. Why would I think about such a silly thing? What is there to think about? I'm so happy you asked. Although I love my husband and even his last name, the fact of the matter is that it is not my name. Changing my name felt like giving up my identity. I did a lot of research on the topic. I listened to lots of people. I have heard it all -- you're not losing your identity, you're gaining a new part of yourself. If you don't change your name, you aren't honoring your husband. If I had a different name than my husband, how would people know we were married? Wouldn't that be confusing? But the most frequently asked question was, and still is to this day: how does your husband feel about it?

The scarlet F
During this whole process, nobody asked how I felt about it. In our society, women change their names, and where I'm from, if you do not change your name, you wear a big, fat, ugly scarlet F on your chest for FEMINIST. When did feminist become a negative word though? Why is a woman supporting women linked to such dirty connotations? I swear the people in my life were one step away from dousing me with holy water to knock some divine sense into me.

After discussing my concerns with my husband, I was not surprised to receive his support. Although I was not "asking his permission" to keep my name, it was important that he understood where I was coming from. Hyphenating my name was also not the right choice for me, as this was still changing my name and my identity.

If we change names to honor our spouse, then who is honoring the woman? If changing your name isn't a big deal and promotes your new identity, why don't men change their names?

History behind the name change
Historically, women changed their names through marriage because women were viewed as property. So Mary X is her father's property until John Y comes along, and through the transfer of property, aka Mary, she becomes Mary Y. This male-dominated history of such a valued and beloved tradition did not sit well with me. I was not comfortable with a tradition that viewed me as "property," ensured I did not have my own identity separate from my husband, and solidified a woman's submissive position in the marriage.

Lasting thoughts
There is no right solution for any woman; my only goal is to share the idea that changing your name after marriage should be a thoughtful decision.

Oh, and you're pretty. Did anyone tell you that lately?

P.S.: Please be mindful when someone does keep her last name to honor her choice. Do not send her mail to "Mrs. John Doe," for instance, just because you view her choice as wrong.

P.P.S.: Please control your face from contorting into an awful, judgmental grimace when you ask someone why they kept their maiden name. Smile! Be kind -- it's cool.