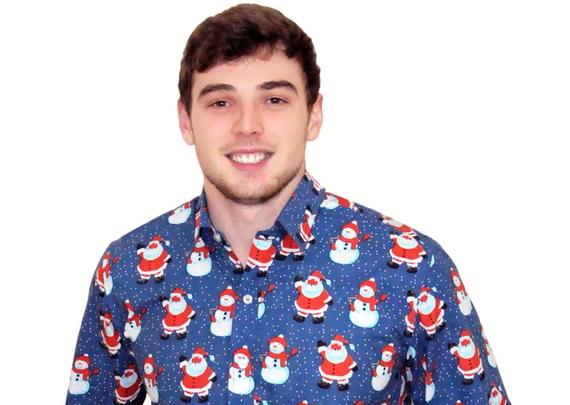 ♬ It's nuts roasting by an open fire,

Sweat drops, dripping from your nose.

If you've ever been on a pub-crawl in a Christmas jumper, this pretty much sums up the experience. The fire's going, the drinks are flowing and people are packed in tighter than a fat guy in jorts. And what are you wearing for the evening? A big woolly jumper. Good choice.

My name is James and I am the founder of The Christmas Shirt Company. We make Christmas shirts - the cooler alternative to the traditional Christmas jumper - and sell them on our Shopify store.

I officially set up the company this year, but it's been in the works since 2011 when I was working at an architectural firm which, like many others, was fighting an uphill battle against the economic recession.

I remember I used to come home from the office, turn on the TV, and think for hours about ways to escape the 9-5. It happened to be December at the time, and the bars of Dublin were jammed with Christmas jumpers... and very sweat-sodden ones at that!

I thought Christmas shirts could potentially join the festive apparel boom, and I began to do some basic research. I was surprised that there didn't seem to be anything of the sort on the market. Was this good or bad? I wasn't sure. But working in a job I didn't love until retirement scared me so much I was willing to try anything. So I ordered my first samples.

I tried a few more suppliers and when I was finally happy, I placed a bigger order. It arrived in January 2012. Just in time for Christmas.... Not.

Being a seasonal business, timing is crucial. You only get one shot per year. So I had to wait. I spent my spare time refining the designs, building my Shopify store (which was perfect for someone with no programming or ecommerce expertise), and prepared for launch in October 2013.

It was almost a case of 'build it and they will come,' because with very little advertising on Adwords and Facebook, I started seeing orders.

At first it was just one per day. But that was, at least, enough to subdue the voices of self-doubt that were beginning to win the shouting matches in my head. And then, the orders just kept on coming. So far this season, we've shipped to over 20 countries.

Shopify has been a great help. Specifically, its intuitive back-of-house, wide range of apps and customizable templates have been a pleasure to use. I always recommend it to others looking for a great platform.

As the company name suggests, I've committed to my shop being a seasonal business. As such, lots of people ask me what I plan to do for the rest of the year. Well, I'm going to concentrate on improving the product and generally expanding the business offline and online. Plus, I have a few non-related ecommerce ventures I'd like to get off the ground.

So if you're sick of roasting by open fires, fed up of smelling like an overworked reindeer or simply can't decide what to wear to the Christmas party - don't sweat it. Order your Christmas Shirt today.

James McCarthy is the founder of the Christmas Shirt Company, and lives in Dublin, Ireland.