I'm a 41-year-old mother of two young boys who recently left a comfortable corporate gig. Is it naive of me to think I can build a digital health startup to bring more gratitude to the world and still have more time to take care of myself and my family? I don't know, but I'm going to try.

Many years ago, I met the most inspiring man on an airplane. After hours of covertly watching his enthusiasm, I decided to interrupt, "I'm so sorry for looking over your shoulder, but can you tell me what you are preparing for so passionately," I asked. He was on his way to give a motivational speech.

I was seated next to a member of the first Jamaican bobsled Team. He told me one simple statement has carried him from the Kingston ghetto where he grew up, to the army, to the Olympic Bobsled team, to now:

All he knew was the Army was the way out of the ghetto. After taking that step, the next step became more clear. His philosophy has often inspired me to leap even when I don't know where I may land.

I haven't always followed the "go as far as you can see" philosophy. At 18, I chose to go to the Air Force Academy because I wanted to be a fighter pilot, test pilot and astronaut. I spent a semester at the French Air Force Academy, soloed a CAP-10 and got multiple rides in fighter planes. It was awesome. 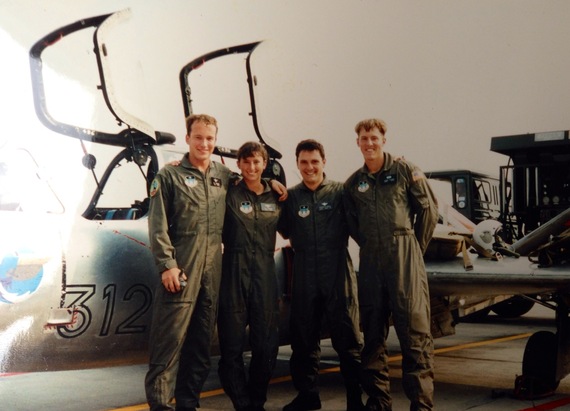 After graduating from the Air Force Academy, I went to Washington D.C. to get a Masters degree in Electrical Engineering and work at NASA Goddard. I was sure I was on the right path. Except, I wasn't.

Something happened that changed my trajectory -- the war in Bosnia. At 22 years old I suddenly realized that flying is more than adrenaline and avoiding a desk job. There are consequences involved that I may not have direct influence on or control over. I started to question my path, but I felt obligated to achieve the goals I had set. Finally, a good friend pinned me down with this question: "Why do you think you have to fly just because you can fly?"

It was now time to truly embrace the "go as far as you can see" philosophy. I had dreamed of being a touring rock drummer since I was 14 years old and saw Phil Collins light up the Cleveland Colosseum. I figured there were too many trained musicians in New York and Los Angeles, so I moved to Silicon Valley. I worked as an Air Force engineer at Lockheed Martin Missiles and Space by day and started playing in bands at night. 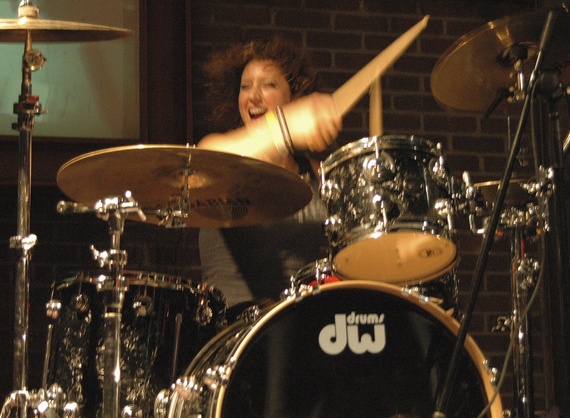 Don't avoid taking a job you are drawn to do for fear you can't get back to the one you have.

With two more years of commitment to the Air Force, I went back to the Air Force Academy to coach Division I Tennis and help cadets who couldn't pass the Physical Fitness test (PFT). Many people warned: "If you leave technology, you will never get back. It moves too fast and you will be left behind."

Possibly, but I had great coaches who influenced me, and I wanted to return the favor. Go as far as you can see...

I worked with many amazing cadets. One of them, Margaret, was at risk of not graduating if she couldn't pass the PFT. I spent a lot of time training with Margaret. If I had some little part in helping her not only graduate but go on to run marathons and do great things in the Air Force, that's success.

An unconventional approach to business school:

I completed my military commitment and headed off to Harvard Business School. Knowing that I was not chasing power and money, I was worried I may not fit.

I found a way to make it fit by going as far as I could see. I started a band with classmates called Corporate Whore. Two weeks later, I convinced the orientation committee to let us play our first show for our 900-person class the day before school started. By offering to work for free at the original House of Blues in Cambridge, I learned that Monday nights weren't making them much money. So, I promised we would sell out the show if they gave me the Monday after our finance final. That began our regular rotation at Boston venues.

Free yourself from the shackles of prior success.

I spent the summer after business school at Ardent Studios in Memphis recording our album, followed by an internship at LAUNCH in Santa Monica. My experience at LAUNCH gave me the opportunity to create a role at AT&T creating partnerships between record labels and retailers to sell new digital content cards. I thought digital music was the perfect way to combine my passions for music and business.

I was also becoming a better drummer. After a 10-day, mini tour that included playing a small venue at SXSW, I was hooked. I had gone as far as I could see, and now I could see farther.

I left AT&T and hit the road with my band, Paperboy Jack (we got a new lead singer and "re-branded"). A believer that cutting costs was better than trying to chase money, I gave up my apartment and put all of my stuff in storage. I traded my car in for a 15-passenger van and spent 10 months on a self-booked, self-funded tour playing 125 shows across 22 states.

Business school friends would say: "I would love to chase my dream and do something like that, but how do you take that kind of risk?"

Funny thing: More degrees often means feeling more shackled to a job and career. You feel pressured to "meet your full potential" (and pay off debt) instead of feeling free to take a chance. I am a big believer in never picking a job based on building a resume or because it's what everyone expects of you. Pick what you want to do based on the stories you want to tell and the impact you can make.

Following your gut rules out some jobs and guarantees others.

After the tour ended, I tried to be a professional drummer for hire. I failed miserably. After getting passed up as Beyonce's drummer, I decided to spread a wider net. I applied for jobs in Raleigh, N.C. with no luck. I no longer fit the mold for most companies, and I wondered if my "go as far as you can see" philosophy may have failed me. I needed to find people who appreciated me and my unique set of adventures.

I landed at Radar, the best mobile photo sharing app that came out years before Instagram (it was the era of the Motorola Razr "cameraphone"). They had just raised their series A round, and their new VC board member, Sam Jadallah, said:

"I would normally never hire anyone with an MBA from Harvard Business School this early in a company because they tend to be too risk averse."

Since I was still living in my van, he thought maybe I didn't fit the stereotype.

Several years later, I married my HBS classmate and touring bandmate, James. When I got pregnant with my first kid, I researched maternity policies for small startups. I learned that our country is pathetic compared to the rest of the world when it comes to maternity and paternity leave. There is so much pressure to move fast and grow huge, there is no time to take a break for family. So, I left Radar and had my son.

A year later, my husband lost his job. Instead of moving from San Francisco or using all of our savings to weather the storm, we sublet our house in Noe Valley and headed to Buenos Aires. After two months learning Spanish and exploring Argentina, then a month of visiting family around the U.S., it was time to "get a job."

Back to corporate America:

When we came back, I joined the rapidly growing, all-star team at AOL in Palo Alto. They were going to turn AOL around, Apple-style. Soon after starting my new job, I got pregnant with my second child. I was terrified to tell my new boss. Fortunately, I was lucky to have been working for someone who vowed not to treat other women the way employers had treated his wife. I was so grateful to have time for my family and my job still waiting when I returned.

I had the good fortune of having an amazing nurse take care of me for each of the births of my two children. By the time I realized all that Laura had done for me during the birth of my first son, she was off her shift and I never saw her again. I learned that it is incredibly difficult to track down a nurse to thank them after leaving the hospital.

Three and a half years later, I had another incredible nurse, Elspeth. She stood by my side for 12 hours, and I was determined to share my gratitude this time. It still took me eight months to track her down. During my conversation with her, I started to learn that our system for appreciating awesome caregivers is terribly broken. So, I set out to fix it.

VCs ask if this is a billion dollar business. It might be. For now, I'm excited that my company, DohJe, is already helping patients connect with their caregivers to share gratitude in a meaningful way. Caregivers are feeling more appreciated, which is proven to lead to even better care.

Amanda Krantz is the founder and CEO of DohJe.com, a website connecting patients and caregivers for the sole purpose of sharing gratitude. Before her latest stint in Corporate America, she was an Air Force Captain, professional drummer, Harvard Business School Graduate, serial entrepreneur, and tennis coach.

Founder and CEO of DohJe.com