I fully believe that bullying exists and that it is a real problem in some cases.

But I also believe that the word "bully" is sometimes overused to describe a lot of age-appropriate squabbles that we can let our kids resolve on their own.

Like any mom, it's hard for me to hang back and let my child battle it out with another, but if I jump in and solve every social conflict he has, he might expect me to solve all of those problems and quite frankly, I don't want him living in my basement.

I love him enough to let him learn how to handle conflict.

I heard every detail of this saga during his first grade school year, and I was confident that I didn't need to step in.

I heard the name of a specific boy several times, and he was described as "the mean kid" by more than one child in the class.

As a former mean kid, I can say with 100% certainty that a child is mean for a reason. There is always something else going on, and helplessness about a situation often turns to anger.

I have a hunch about possible conflict in his home life. I don't know him or his family, but my heart goes out to him.

The safety of my own child is paramount, make no mistake. Mom's devil horns aren't going anywhere.

But if my son is willing and I can help this boy within the safe parameters of the school day, then I am okay with that. I have a hunch the boy acts out due to a lack of friends to play with.

His conflicts with my son had to do with racing to play with another boy at recess. They were fighting over who was who's best friend. There was a little bit of name-calling out of frustration, but nothing beyond that.

I suggested that my son tell the other boy that he would rather be his friend than fight with him, and see if he would want to play at recess.

He tried that over the next few days, and they became friends. They started sitting together on the school bus and trading cards, and all three boys played together at recess.

I would see the excitement on the other boys' face when the school bus would pull up to our drive and he would wait for my son to get on. So in this instance, I'm glad I let my son play with the "mean kid." (And for the record, I don't think there is such a thing as a "mean kid." I believe kids simply act out of their circumstances.)

I am not naïve enough to believe that I have waved a magic wand to solve every problem until the end of time, but I believe involving the parents and the school over this would have added unnecessary tension.

Parents should absolutely step in in an escalating bullying situation. But when it's something the kids can resolve between themselves, we should let them.

And several weeks after they became friends, the boy wrote this note to my son on the bus and gave it to him: 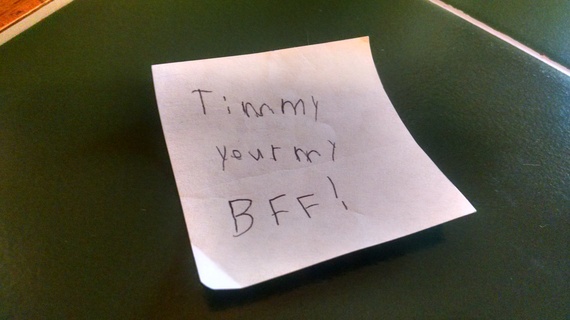 I nearly cried when I saw it. This boy needed a friend. There's always a reason when someone acts out, and I think it's worth looking beyond surface behaviors when we can.

If their friendship deepens, we may have some future issues to work out as we get to know the family. But for now I'm enjoying the victory of letting them work it out, and their sweet friendship.

Professional writer/blogger at RealHonestMom.com and lover of homemade tortillas.