This may be a controversial thing to say, but I'm an unapologetic fan of 3D movies. I see 3D not as a fad, but as the wave of the future. Whether it's in movies, the next generation of smartphone apps, or 3D modeling and printing, the trend in all our technology is toward recreating reality with greater detail in three dimensions.

I'll have more to say about this in a moment, but first, I wanted to let fans of 3D cinema know about a wonderful opportunity this week to see classic 3D films at the World 3-D Film Expo in Hollywood. Leonard Maltin gives high praise to this festival for offering what may be "the last opportunity" to see many classic 3D films in their original 35mm dual-projection formats, noting that "digital restorations are good but they don't pop off the screen the way the originals do." The World 3-D Film Expo is unspooling this week through Sunday, September 15th at the Egyptian Theatre in Hollywood.

The screening not to be missed at the World 3-D Film Expo is this Friday afternoon's 3:30pm showing of legendary Western director Budd Boetticher's The Wings of the Hawk (1953), with star Julie Adams in attendance. (Ms. Adams is most famous for being the star of Universal's iconic 3D classic, Creature From the Black Lagoon. You can read an Atlantic interview Jason Apuzzo and I did with Ms. Adams about the making of Creature here.) 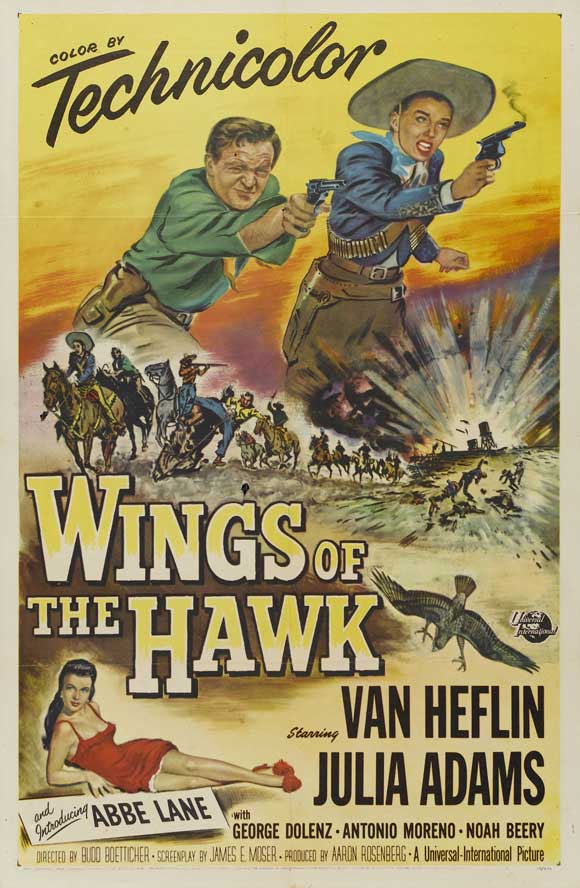 Shot in eye-popping color 3D, The Wings of the Hawk stars Julie Adams as fiery Mexican revolutionary Raquel Noriega (complete with breeches and bandoliers) in a proto-feminist role opposite an edgy miner played by Van Heflin. How many classic movie posters (see above, and the photo below) feature the heroine in a more commanding pose than the hero? If you want to meet this lovely and charming film legend in person, Ms. Adams will be present at the screening signing copies of her autobiography The Lucky Southern Star: Reflections From the Black Lagoon. 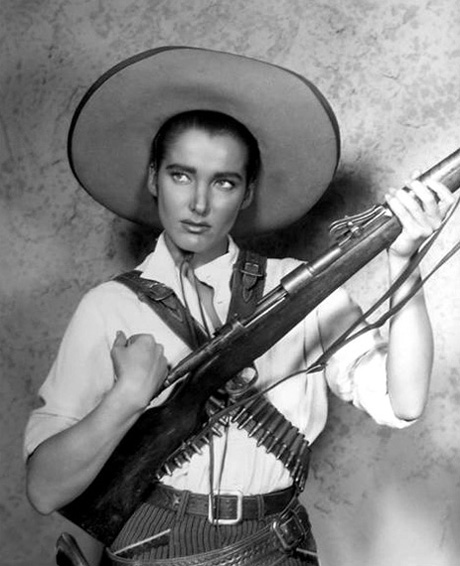 Other films to catch over the next few days of the festival include a very rare 3D screening of It Came From Outer Space (based on a story by the great Ray Bradbury), Revenge of the Creature (with a cameo by a young Clint Eastwood), and the Mexico-set gangster drama Second Chance (starring Robert Mitchum, Linda Darnell, and Jack Palance), which features stunning on-location photography. Also intriguing is Cease Fire, a Korean War drama featuring the only color 3D footage ever shot to this day during combat. 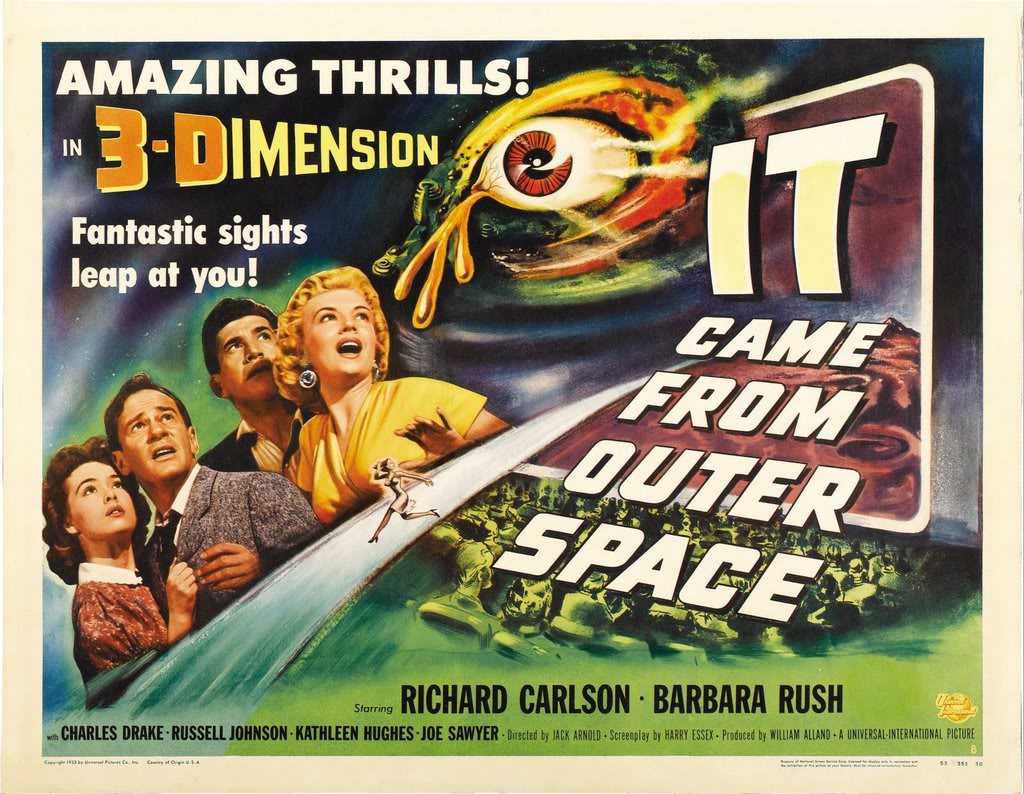 The World 3-D Film Expo is showing many of these films in the last known copies of their archival, double-system 35 mm celluloid prints, projected with dual projectors and viewed using polarized glasses. This is the way 3D films were originally meant to be seen - not with inferior anaglyphic prints made decades later using color separation, of the kind people often mistakenly identify with '50s 3D.

And this brings me to my larger point: with all the enjoyment to be gained by watching 3D movies both classic and contemporary, I don't see why the technology remains so controversial. Critics repeatedly assert that 3D is a gimmick, citing as their evidence the supposedly egregious use of spear-throwing or other projectiles in the past as a reason why all 3D in the present must be condemned. (What's wrong with throwing a spear at the screen, anyway? Or having a monster's claw come rearing out at the audience - as in that great moment from Creature From the Black Lagoon?) Such critics would no doubt have been offended by the famous 1st century B.C. Roman mosaic of Alexander the Great, in which the charging horses and bristling spears appear to come straight at the viewer.

And while movies shot natively in 3D certainly look a lot better than those that have been converted after the fact, I still enjoy both because I like experiencing the immersive quality of a 3D image - of being made to feel like one is literally swimming in a movie, much like Ms. Adams in her famous dip in the Black Lagoon. 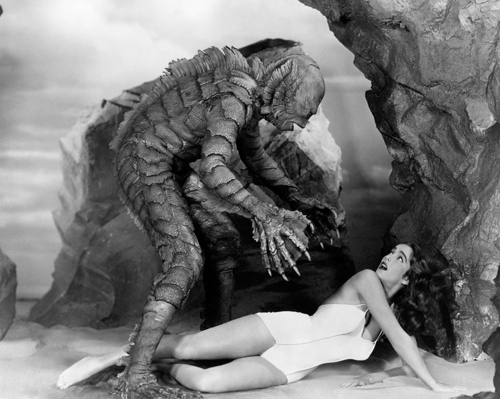 The attacks on 3D in recent years have become increasingly misplaced given the vast advances in 3D technology. Movies from Avatar to Prometheus and Hugo have used digital 3D technology in inventive and sophisticated ways, and the technology is progressing by leaps and bounds. Take a close look at the stunning use of IMAX 3D in the Chicago action sequences of Transformers: Dark of the Moon. If you prefer indie films, look at Wim Wenders' use of 3D in his dance documentary Pina. The upcoming Jurassic World is being shot natively in 3D, and Michael Bay is shooting the next Transformers movie in a new proprietary IMAX 3D that has everyone behind the scenes buzzing.

Obviously the use of 3D alone does not take the place of good characters or good stories - but then who would argue that the use of Technicolor in the '30s, or wide-screen formats in the '50s, or computer-generated imagery in the '90s was intended to replace good storytelling? They weren't, and the point is that filmmakers used these expanded cinematic tools to spectacular effect in movies from Gone With the Wind to Laurence of Arabia to Toy Story.

And today's filmmakers will use the expanded tools offered by 3D technology to tell amazing new stories - stories uniquely suited to conveying the dizzying pace of technological change in our world.

It's therefore hard to see the ongoing complaints about 3D as anything other than the objections of antiquarians to any new technology - akin to complaints in the 1920s and '30s that color and sound would spell the end of the cinema. "We see in 3D anyway, but your brain has cut that gift down so that you don't really think about it--you think you're seeing in 2D, but you're not," as Ridley Scott said when promoting Prometheus. "When you put on those [3D] glasses, it reminds your brain of how you really see." 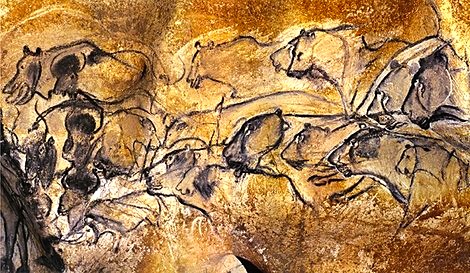 Werner Herzog, for example, used 3D to wonderful effect in his documentary Cave of Forgotten Dreams. His purpose was to give viewers a better sense of what it would be like to explore the Paleolithic painted cave of Chauvet in southern France. As Herzog pointed out, the cave painters themselves incorporated natural protrusions in the rock into their paintings in an effort to imbue their art with three-dimensionality.

It's always been this way: the effort to imbue our art and representational media with greater three-dimensionality and depth goes as far back as the Paleolithic. It reached an early height in Greco-Roman times, was reborn in the use of perspective in the Renaissance, and again returned at the birth of the movies at the dawn of the twentieth century. It was then that inventors seeking to represent the changing experience of the world in the Industrial Age created the first 3D short films and stereoscopic movie-viewing devices.

This is why Martin Scorsese likened the use of 3D in his film Hugo to "cinematic Cubism," for 3D movies are the logical outgrowth of the great explosion of Modernist creativity in the early 20th century that continues to shape us today.

And as much of our twenty-first century digital technology is showing us - from advanced smart phone apps to virtual reality devices to on-line gaming - 3D seeks to fulfill an enduring dream of humanity: to gain mastery over the world by recreating it through art and technology.