All my life, I have loved Halloween. I know that's nothing special, especially for gay men (or boys). For many of us, the chance to dress up, pretend to be someone else, express ourselves in creative and fanciful ways was something we eagerly awaited all year long. For me, it was always the chance to be one of the many superheroes I world read about in the dozens of comic books I devoured on a weekly basis. There was Superman, Green Lantern, even Underdog! I had homemade costumes meticulously made out of spandex and felt by my grandmother after spending hours in the fabric store researching Butterick or Simplicity patterns. But I also loved the store-bought, plastic one-piece jumpsuits with the matching mask that came in the cardboard boxes with cellophane windows from Woolworth's or Key Rexall Drug Store. Hell, I would even try to convince my mother to let me wear my Aquaman Underoos out trick-or-treating, only to be told, "You are not going out in your underwear!"

As I got older, Halloween was still fun, but before I came out it was more an exercise in balancing my participation with trying to look like I didn't really care about dressing up so as to not draw too much attention. Frankly, it sucked. It was like being given a gift you really wanted but being told not to get excited about it. Oh, and you don't really get to use it. But, enjoy! So my costumes became more thrown-together, ironic, or downright pedantic.

Sure, after coming out, I re-discovered my passion for Halloween and threw myself into the "gay high-holy day" with my fellow gay brethren. This time, there was the sexy-Superman, the sexy Angel, the sexy Devil. Really, it was basically an excuse to wear as little as possible, yet still call it a costume. It was fun to be sure, but it's time was fleeting and now I cringe at the photos from that era (and simultaneously long for the days when I could easily maintain that midsection).

But becoming a parent... now the fun could begin anew! The chance to experience the joy of Halloween through the eyes of my son. Getting excited about picking out just the right costume, heading out to trick-or treat, and school Halloween carnivals were back in my life! Granted, I knew not immediately as the first few years Clark would be too young to care (or even really understand why Poppy and Daddy were dressing him up as a chili pepper or candy corn). But still, the day would come.

When my son was 17 months old, I was rushing home from work to get him ready for trick-or treating for the first Halloween where he was old enough to actually go door-to-door and hand out candy to the kids that would come by our house. He was only five months old for his first Halloween, and while the pictures were adorable, it wasn't really Halloween yet. This year, it was HALLOWEEN!

I had gotten home a little early to get things ready and Brian was picking Clark up from daycare on his way home from work. I got changed, got the candy ready and was putting up the last of the decorations when the phone rang. It was Dr. Mason, my dermatologist. She had called me earlier in the day and asked I call her back, giving me her cell phone as she was leaving work early but wanted to talk to me today. So I did, got her voice mail and thus began a rousing game of phone tag. You see, earlier in the week I had gone in to have her check out this freckle on my back after Brian told me that he thought it had gotten darker. She took a look at it, took a photo, and then did a punch biopsy to send off to pathology. She said it was likely nothing and don't worry about it. So I didn't. "Why so calm," you ask?

I had a 17-month-old, so I had plenty of other things to worry about.

I worked for a cancer nonprofit organization and knew that skin cancer, while common, was largely easily treated.

Over the phone, I could hear Dr. Mason trying to calm her own kids and that she was in the car. "Andy, I'm so sorry to call from the car, but I left work early to pick up my kids and get them home and ready for Halloween." "Me too," I laughed. "What's up?" She took a deep breath and said," I am so sorry to tell you this, but your biopsy came back and its melanoma." I stopped breathing and could feel my face flush. "Okay," I said. "Do you know what stage?" With melanoma, as with most cancers, its all about the stage. Melanoma, I knew, was a highly deadly form of skin cancer and at late stage, the treatment was gruesome and the survival rate was low. "I think we caught this very early, but I want you in for surgery on Monday so was can take wider margins and be certain." I told her I would come in for a consult with the surgeon, but wanted the pathology report to send to some other physicians I knew, just to get a second opinion. She said, "Of course," and gave me the name of the surgeon. I thanked her and wished her a Happy Halloween.

I walked outside to get some fresh air and just kind of kicked around the yard, taking deep breaths. The crazy thing was, Brian's father was currently being treated for melanoma up in Dallas. Stage 3. One year of Interferon injections. He was six months in and it was sobering to watch this huge man, loud and active, basically be forced to take early retirement and have barely have enough energy to stay awake for long periods of time. He was losing weight like crazy and wasn't sure he was going to have the strength to finish the entire year of chemo.

Two things kept running through my mind. The first was that if I have to do chemo, would I have the energy to keep up with caring for my son. We had waited until our mid-30s to start our family, but were clear about wanting an infant. We wanted to raise a child from birth and experience every stage of his or her life. I didn't want to miss this time, laid up in bed or unable to leave the bathroom. Sure, Brian was there so I wasn't a single parent and Clark would be cared for. But how could I be fully present as a parent and be fighting this at the same time? It was too much wrap my head around. So my thoughts turned to the next thought - what about Halloween?

That's when it hit me. All those future Halloweens. I never considered I might not be around for those. Was this the first and last time I would take Clark trick-or-treating? Was this the only costume I would ever see him in? "No. Not doing this," I thought. This was Clark's first Halloween and it was going to be fun, not sad. And not just fun for him, fun for me too. I was not going to let fear of what might be spoil the one time of the year when you're allowed to be anything you want. And I knew just what I was going to be for Halloween this year. I was going to be a dad. 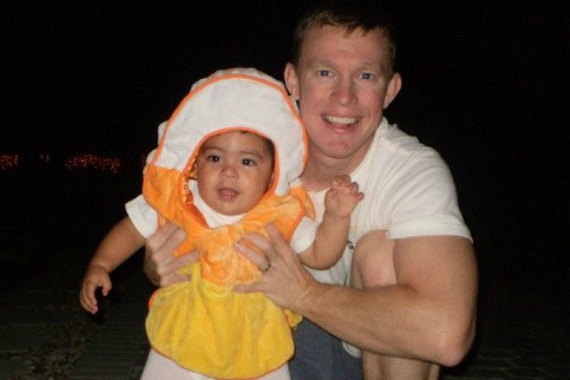 The picture above will always be one of my favorites of me and Clark. My little candy corn and his Poppy, who despite just being told he had cancer, had the best, most meaningful Halloween of his life.

(Thankfully, Dr. Mason was right. My melanoma was caught early. They took a hunk of tissue from my back and no chemo needed. It left me with a nasty scar and a standing appointment with my dermatologist every six months. But it also left me with an additional six Halloweens -- and counting -- with my son.)