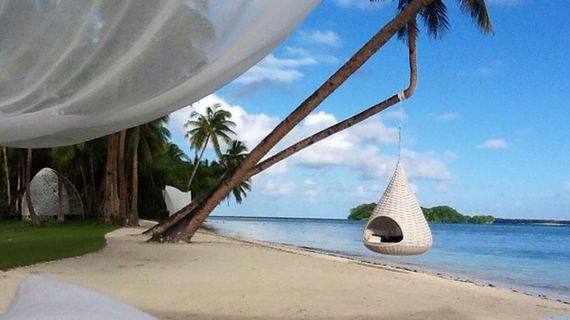 Yes, this is a real place. I know it's real because I took it. It's The Philippines.

In January, I'll be making my fourth annual trip to Manila, Philippines to teach a new group of students how to teach yoga. Because the five weeks I spend there are the best of my year every year, I've already got plans to go there to teach with the same young, growing yoga company through 2017. In no particular order, here are a few of the reasons that I love it so much:

Most of the things that I pay for when I am in The Philippines cost me a lot less than they would in the U.S.. Very good massages, for example, are priced at a rate that makes it feel almost criminal to deny myself near-daily rubdowns. In the U.S., I can't imagine being able to afford the going rate for such a thing.

The Philippines' low prices are, of course, based on the fact that there is a massive population of very poor people there. And I benefit from that income disparity when I partake. But, going there and spending dollars is going to help more than spending them elsewhere, so I spend. For now, I give outrageously large tips and treat everybody with the respect they deserve. And we all could use a massage once in a while. Or every day. Right?


2. There is a very high concentration of extremely good students.

In high school, I thought I was a good student. Now that I am a teacher, I know that I was not. Now, when I say "good student," I am referring to a person who is there to learn about what I am there to teach, and they put their available resources toward learning it.

For a teacher, good students obviously make the job of teaching a lot easier. But in the case of yoga, these good students get to go much more deeply, and with greater cognition, into the experience of actual yogasana because they've acquired a fluency about its aspects and parts. And, since I exist to teach yoga, not to make things easy, I wish that good students were less rare. In Manila, good students are plentiful.

I hate to say it and I wish it wasn't true, but, generously described, the trainings that I have taught in the US have a lower density of these model students. Typical students in the US require more of a buy-in as to why the content of a given lesson matters. Only then can the learning and teaching start in earnest. The American "just do it" mentality would greatly benefit from an equal amount of "just learn it," especially before standing it on its vulnerable head and calling it yoga. I don't mind providing the bells and whistles that my fellow Americans are used to -- in fact, I love doing it. I love challenges and it never gets boring! But the extra energy that goes toward that endeavor limits the depth and complexity that is learned and experienced by the trainees.

Being a respectful student and a devoted learner can go too far, though. I remember the first time I taught a teacher training in Hong Kong, which was also my first time teaching outside of the US. During lectures, none of the students would ever have any questions, no matter how much I begged them to please ask me something. One time I actually had a stand-off with them, saying that I would not go on with the lesson until a question was asked. I lost the standoff. I actually didn't last for very long. Class time is too valuable to waste on standoffs. 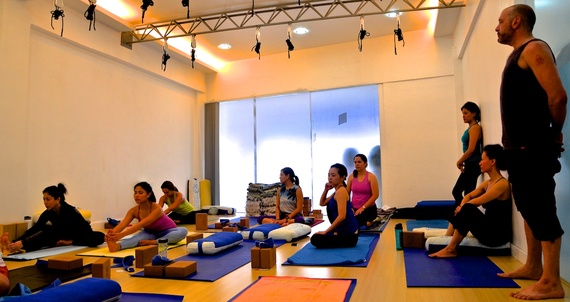 The good students of Manila.

Afterward, one of the students, who was Chinese but was raised in Canada, came up to me on a break. She told me that it was considered disrespectful to ask a teacher questions because it could be perceived as an indication that the teacher had not succeeded in teaching. I thanked her and came up with a new strategy. We were all able to adapt together, but it took a while and I learned to be careful what I wish for.

In Manila, the students are, as Goldilocks would appreciate if she were a yoga teacher trainer, just right. They are there to learn and they're used to the process of education. They ask questions, remember what I say, and they even form highly active extracurricular study groups that actually meet, study, and learn on their own, although we have a nine-hour training day every day. But, they are not so hyper-respectful of the teacher role that they are afraid to ask questions. They ask lots of questions! And they ask questions that indicate they've been trying to follow, not ones that indicate that they are actually on Facebook (the blue and white reflection of which I can see on your eyeglasses, American students who are telling me they are NOT on Facebook during lectures of vital importance). How can a teacher not love this?

3. Filipinos are the friendliest people in the world.

I am sorry, Thailand, Taiwan, and Bethlehem, Pennsylvania. You were each, at different points in my life, in the top position on my list of friendliest places. But I hadn't yet been to Manila.

From the time I check in with Philippine Airlines at LAX until I deplane back at home weeks later, I am treated like a long lost friend in just about every interaction I have. This is not an exaggeration. I am saluted at least once a day there. Saluted! There are security men in the doorways of nearly every business there and, when I walk by, I am saluted as a matter of course. I do not know why and, because I don't want to mess with it, I am not asking a lot of questions. 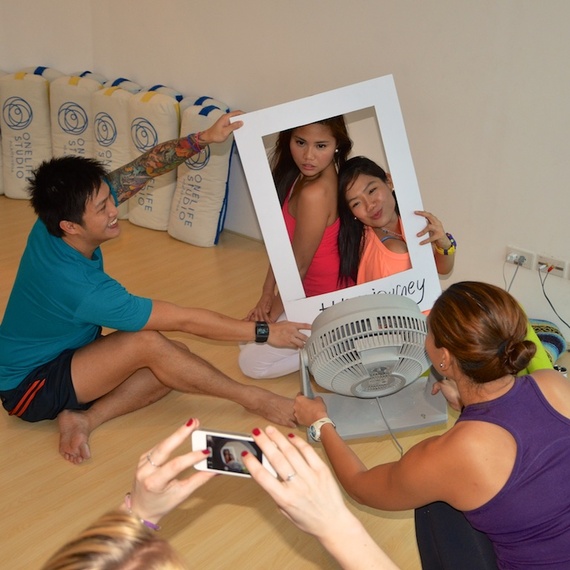 Friendly, as ever, on graduation day.

Let's put it this way, Hong Kong. If Manila had a subway, I would not get pushed nearly off my feet by a different five-foot tall, 80-year-old woman almost every time I try to ride it. Not at rush hour. Not ever.


4. The yoga business is new, yet wisened by the experience of predecessors in other places.

If you live in one of the places where there is at least one yoga studio for every two Starbucks, you might be surprised to know that yoga classes are a relatively new thing in a lot of the world.

Traveling around teaching trainings, I have gotten to see how yoga is introduced commercially in different places. In Australia and Hong Kong, for example, it seems that yoga got traction in fitness facilities more than in dedicated studios; while in London and Taiwan there have been plenty of dedicated yoga studios from the beginning.

In The Philippines, all of the yoga businesses I have worked with are relatively new because yoga is new there. Yet, although they are young, they are in many ways ahead of their industry predecessors in more ripened yoga markets like LA. That's because they did their homework and got things right from the start, which has included successful, earnest marketing toward working people and those who don't look or function like the American cliche of a practitioner. From the design of the facilities and choices for in-house props to the all-important standards for teachers, Manila is presenting a more grown-up version of the yoga scene than I've seen anywhere else.

But the best thing about yoga's newness there is that it gives me an opportunity to contribute to setting a higher bar for yoga teacher training standards than those we have here in the U.S. It's an almost-blank slate there. In the U.S., support for higher standards for yoga teachers is counter to the deeply entrenched status quo, to put it diplomatically. In Manila, higher standards, at least for the new teachers I've watched learn and graduate, are the norm.

5. They address me differently there.

In public, service people of any sort often call me Sir James, once they know my name, and that is then the only way they address me. (For the record, my name is not Sir James. It's just James). Let me be the first to say that I am a horrible human being for many reasons, and loving this is one of them. I am so sorry. I am powerless to stop it anyway. Who am I to get in the way of this custom?

This may sound like it's too much information, but it's worth it so hang in there a moment. Walking home from the training one sunny day, I decided to treat myself to a back waxing. It cost almost nothing and I had some time on my hands and some hair on my back. I used to have it done all the time but I don't so much any more for whatever reason. The fashions change. Nonetheless, I am still used to the feeling. It does not hurt, really, at all. And, though I expressed repeatedly and clearly to the wax tech that I was just fine, she would say, every ... single ... time ... that she pulled a strip of wax off of my fully desensitized back, "OH MY GOD, SIR JAMES, I AM SO SORRY!" Every time. She did not remove a hair without the accompanying apology. Again, not an exaggeration. And my back needs a few dozen strips. But we never got past OMG. THAT is how it's done in Manila. 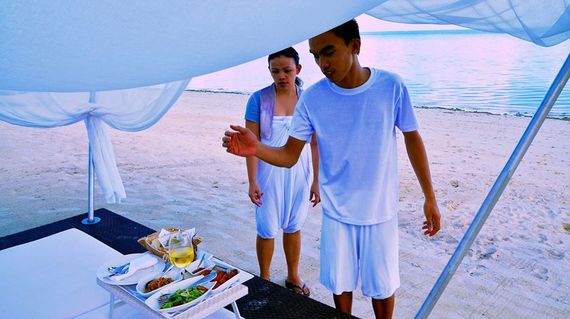 Having my lunch explained to me on this post-training beach surely included a "Sir James" or two.

I know. Sir James is a cheap thrill. And I'm cheap so it thrills me. But the first time I got called kuya there, and every time since, I get a little lump in my throat and remind myself how lucky I am to have been introduced to my growing family of friends there. Kuya doesn't translate easily to English. It almost means Big Brother, but it applies to other older male family members.

Simply put, you had me way before kuya, Manila. But that totally sealed the deal. Alas, it is indeed more fun in The Philippines. I'll be there soon.

The best educated yoga teachers in Manila (so far). April 2014

Download
Calling all HuffPost superfans!
Sign up for membership to become a founding member and help shape HuffPost's next chapter
Join HuffPost
Follow James Brown on Twitter: www.twitter.com/americanyogasch
Voting Made Easy
Register to vote and apply for an absentee ballot today
Register now