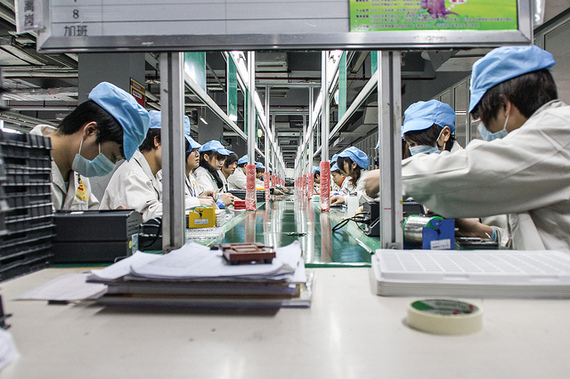 In an interview with Yvon Chouinard, founder of the outdoor clothing company Patagonia, environmental journalist Joel Makower asked Chouinard whether he felt any kinship with Apple, whose late CEO Steve Jobs was "another iconic, iconoclastic, design-oriented entrepreneur." It was a reasonable question: Chouinard and Jobs both have reputations as uncompromising, often bullheaded leaders, focused on the most minute details of their products. Legend has it that Patagonia trouser prototypes had to be sent to Chouinard, who would put them on, lean back in his office chair, and put his feet up on his desk. If any change fell out of his pockets, the designers were sent back to the drawing board.

But Chouinard saw no connection between Patagonia and Apple. "Try and open up an iPhone," he said. "Try and get it repaired. It's a disposable item...they don't want you to fix that iPhone, they want you to buy a new one next year. I can't relate to a company like that."

Planned obsolescence is just one of the many environmental and social problems with smart phones today. If you learn too much about the human suffering and environmental harms that might be embodied in your smart phone, in every step from resource extraction through manufacturing and product disposal, you'd likely never want to buy one again.

But things are changing. Later this year, the Amsterdam-based social enterprise Fairphone will release the Fairphone 2, a dual-SIM Android phone designed from scratch to put social and environmental values first. According to the company, it uses responsibly mined minerals and metals, and its high-quality components are built to last. It is designed to be easily repairable and even comes with its own do-it-yourself repair manual. It will be manufactured to ethical standards that consider the wellbeing of factory workers. The company has set up a recycling program for used phones and is encouraging suppliers to buy recycled materials. The phone will be sold in Europe starting in the last quarter of 2015, with hints of broader availability after that.

Like Patagonia, Fairphone isn't just about its own product line: It's trying to shake up the smartphone industry and shift it toward less destructive practices. Fairphone's company fact sheet says it in a nutshell: "We want to change the relationship that people have with their products and contribute to an economy based on different values. Our phone is just one result of that."

What's not to love? Almost nothing. So why am I not going to buy one?

In the early 1990s I sat on a task force charged with designing and building a permanent home for a sustainable energy nonprofit. We brought in world-class experts in green building design, clean energy, and waste management to brainstorm ideas. We considered proposals for state-of-the-art zero-energy office buildings that would showcase the nonprofit's values, allowing employees to walk their talk every day. But in the end, we were stopped in our tracks by one expert's observation: "The greenest building is one that already exists."

Constructing a new building--even a super-green one--requires lots of energy and materials. It generates waste, only some of which can be recycled or reused. In contrast, occupying an existing building and renovating it to consume less energy and water can have a much lower impact. The nonprofit ended up following that path.

And that's the path I intend to follow with my mobile phone: the fairest phone is the one I already own.

My current phone is 7 years old and shows no sign of dying. I replaced the battery last year, and I wouldn't be surprised if I get at least another five years out of it. It's no longer very smart as smart phones go, but it serves my needs. I admit that sometimes I get tired of it and yearn for a new phone with lots of apps and a great camera, but I can't justify the cost--and not just in monetary terms. Besides, all I have to do is go back and read the original online reviews that encouraged me to buy the phone I have now, and they remind me why I bought it in the first place. It's a great phone.

When my phone finally dies, I'll probably replace it with a Fairphone, which might be up to version 7 by then. But my hope is that by the time I'm ready to buy a new phone, other manufacturers will have followed Fairphone's lead, working through their own supply chains to reduce social and environmental impacts, designing their phones so they can be repaired rather than replaced, and reusing components instead of manufacturing all new parts. I think that's Fairphone's hope as well, and I for one am grateful that they've taken a step toward showing the world how it can be done.