Note: Some of the below images could be considered NSFW

Denise Jolly figured it out within the first few frames of our photo shoot: I don't like to smile. Or, more accurately, I have a fake smile. The one that has haunted me for years. The one that shows my bucked teeth.

Those imperfect teeth are a metaphor for my childhood. Every year, my mother would buy me a new outfit for School Picture Day. She would put my hair in rollers and make sure my outfit was ironed so that my picture would look nice on my grandmother's mantle. I would stress until it was my turn because I already knew the outcome: a bad picture. The photographer was not used to kids like me. The ones in wheelchairs, the ones who couldn't sit up straight. I was a kid before digital cameras and Photoshop. The photo package would arrive in the mail a few weeks later, and there I was, in 8 x 10 and wallet size, my face refusing to conform to all of my mother's efforts. We would try for a better photo on Picture Make Up day, again and again for years.

My parents spent thousands and thousands and thousands of dollars (that they did not have to spare) trying to make my most broken parts fit into the mold of normal. It's what any parent would do if they could, right? My family wasn't trying to make me pretty. They were trying to mitigate my physical disability. I was born with spastic cerebral palsy. So I had braces (three times) and oral surgeries, orthotics and crutches, physical therapy and hamstring surgeries and more scar tissue.

I didn't really think in terms like beautiful/ugly or shame/confidence. I knew that my disability was permanent and that I was a financial and physical burden to my family. Those were the facts. I was sometimes told I looked nice, but I didn't expect to hear words like beautiful or stunning associated with any part of my body. Ever. Those words were for able-bodied people.

I did start to hear those words, however, about my writing. I started writing poetry about my disability when I was in my 20s. But for me, the greatest moment of empowerment came when I started performing for live audiences. I was used to people staring at my body and forming opinions about my life based on my (lack of) mobility. I realized that the microphone gave me a creative platform to educate people, maybe even change their minds. I know I do not represent every disabled person's experience, but at least I was giving people an authentic glimpse into mine.

But the road was not a smooth one.

I was in a hotel room in Knoxville, Tennessee with Sonya Renee Taylor for the 2007 Southern Fried Poetry Slam Competition. We were running late for our bout. I had known Sonya for a long time. She is a radical queer femme spoken word artist and activist. I had first met her through Mothertongue DC, a women's open mic series that I helped curate. I had always had the utmost respect for her talents, but we weren't close friends.

Sonya was putting on her corset and eyelashes. I wasn't even dressed yet. I came out of the bathroom and promptly lost my balance, ending up naked on the floor. All that I can remember is saying sorry over and over again -- because we were late, because I could not get up independently, because I needed help. Sonya asked me why I apologized so much about something I could not control or change. She asked me if I loved by body. I do not remember what my answer was. I know that I cried for a long time. 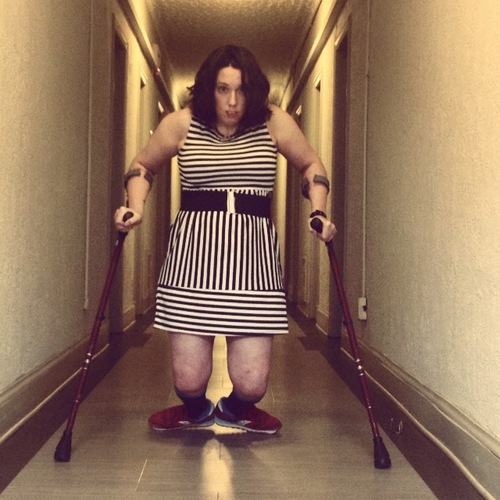 A couple of months later, Sonya came to Mothertongue and read a poem titled "The Body Is Not an Apology." The poem is an anthem, a battle cry to love and honor our bodies, whatever shape or space they hold. The poem was dedicated to me and later sparked an international movement that Sonya founded by the same name.

And then, I met Denise Jolly at the 2008 Women of the Worlds Poetry Slam. She is a quiet storm of a poet. She showed me that some of the fiercest writers and educators among us do not need to shout in order to be heard -- that there is an undercurrent of activism in everything we do as long as it is done with intention. That year, Andrea Gibson won the championship. I was cheering so hard I lost my balance and fell into the row of people behind me. Denise, rocking a black strapless gown, picked me up.

About six months ago, I got a call from Denise. She had just completed her #BeBeautiful Project, a 30-day exploration of her relationship to body shame as a large-bodied queer femme. Denise used social media to challenge and change the way her body looks and feels in public spaces and, ultimately, found out how to radically love and accept her body as it is, a journey that she has now shared with others on a global scale.

Denise asked me if I wanted to participate in her #BeBeautiful project as woman with a disability. I wasn't sure. In 2007, I had written a poem called "Don't Look at Me." Although the poem ends with a positive mantra, it also contains within it the words:

I know you don't want to hear this but

It's your brain held hostage

by your own nervous system.

In many ways, this poem still holds truth for me.

But the body, the body can still be beautiful. There is room for bodies like mine to be gazed at for reasons other than difference. In December 2013, the Huffington Post published a video that featured a line of fashion mannequins modeled on bodies of people with various physical conditions. The message, which is not new, is: We are not perfect, but we are here, boldly. Our bodies are not invisible, especially to ourselves.

Long before I ever knew of the vulnerability of a spoken word performance or the fire that exists inside a poetry slam, I knew I was searching for a reason to stay in my body -- a way not to give up on it. I did not come from a family that sugarcoated anything, not even their love. I come from the kind of truth you might want to shield your eyes from -- the kind of truth about which Adrienne Rich spoke in one of my favorite poems, "Diving Into The Wreck":

the thing I came for:

the wreck and not the story of the wreck

the thing itself and not the myth

the evidence of damage

worn by salt and sway into this threadbare beauty

the ribs of the disaster

I decided to participate in Denise's #Be Beautiful Project, but it is based largely on a series of "selfies." I knew I couldn't stage a photo shoot alone: My hands often shake and my knees lock when I try to hold any type of camera or phone. So we did the best thing we could to accommodate our strengths and abilities: we collaborated. I wanted to assert my body in places I felt most comfortable and safe in Washington, DC, such as the Black Cat's elevator, The Fridge DC, and my apartment. I also wanted to capture the everyday moments that make me feel most disabled: tying my shoes, balancing in the shower, and getting up after a fall.

Denise took all of the photos on her iPhone. We chose filters using Instagram. We used hashtags to connect our communities and with the hope of reaching new ones. I left poetry, that medium in which I had become so comfortable exposing and explaining myself, outside of the frame.

Yes, these photos are revealing -- intentionally revealing -- and celebratory. OK, I'll admit it: They are sexy. Because, why not?! They are the thing itself: my body, as it is now. I cannot separate my body from the cerebral palsy that came with it. I do not want to. Throughout each photoshoot, Denise kept repeating, Natalie, you are beautiful; that shot was amazing; just wait until you see yourself. I wish I could say that to every person who needs a wheelchair or braces or a catheter or a personal care attendant:You are beautiful. I know. The Body is Not an Apology. I promise. 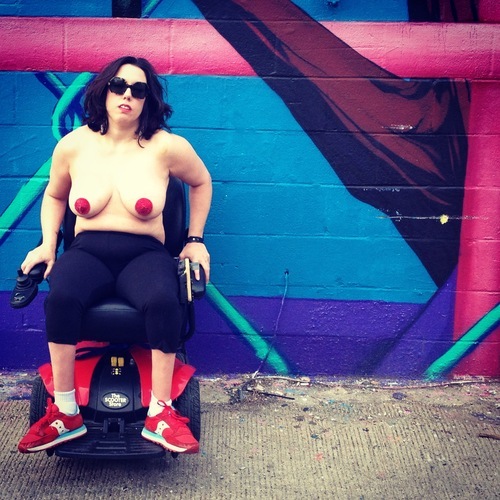 As I write this, I am smiling.

And trust me. It is the genuine kind.

This piece first appeared on TBINAA Tumblr's page, and is reprinted with permission.

Three photographs appear in this piece. They are described here in the order in which they appear.

Image description 1: Natalie is in the sunroom of her apartment, sitting sideways on a piano bench. Her right hand is playing an upright 1930s Hamilton piano, which is directly behind her. Her left hand is positioned behind her for balance. To the left of the piano is a wooden music stand with a white piece of paper on it that says "Be Beautiful." Behind the music stand is a vintage yellow typewriter. The sheet music is Tori Amos' "Silent All These Years." Natalie identifies strongly with the lyrics. On top of the piano is her collection of giraffes and a framed black and white photo of Joni Mitchell, her childhood muse. Natalie is looking sideways at the camera, wearing a burgundy and white polka dot dress, which is unbuttoned to show her cleavage. She is a white woman with dark shoulder-length hair and glasses. Denise is taking the photo through the glass door of the sunroom so that Natalie's body is partially framed by the white panels of the door. One crutch is leaning up against the piano. Natalie's crutches are also burgundy.

Image description 2: This photo was taken in the hallway of Natalie's apartment building. Natalie falls down several times a week. Sometimes, she is able to get up using her upper body strength and the crutches; sometimes, she needs help, In this photo, she is alone, staring straight at the camera. She is in the middle of getting up from a fall. She's wearing a black-and-white "mod" style striped dress, a black and silver belt and red sneakers. Her feet are almost in "second position," heals touching and unable to point forward. Her knees are bare, and about one foot above the beige tile. Neither Natalie nor Denise know whether she will be able to push herself fully into a standing position. (About 10 seconds later, she does.) Natalie was most worried about this photo because she only has enough arm strength for two or three standing attempts before her body is too weak to get up without assistance.

Image description 3: This photo was taken outside of The Fridge DC, a local art gallery and performance venue. Natalie is posing in front of a mural in her electric wheelchair. The mural is a series of barbed wire, pipes and trees in blues, purples, and turquoise. The photo is cropped so that the wheelchair is positioned to the far left of the mural. Natalie is wearing red sneakers, black leggings, red pasties over her nipples, and Warby Parker sunglasses. Natalie's hands are holding onto the arms of the wheelchair and pushing her shoulders back. Her feet are turned outward at an angle that is consistent with Cerebral Palsy. Denise asked Natalie to give her a bitch don't play face, so she looks tough.

All photos taken by Denise Jolly.