You know that icky feeling you get in your stomach when you're fighting with someone ... when the conflict hangs over your head like a dark cloud, robbing you of feeling joy at any given point in your day? Well, that's how I often felt when I was in the mindset of "fighting" my disease. It was stressful, and at times exhausting.

I never did deal well with conflict.

When I was first diagnosed with fallopian tube cancer following the unplanned C-section that brought my daughter into the world three years ago, I immediately put on my boxing gloves and proudly donned the moniker of Fighter. I was going to beat this disease. I was going to kick it's ass. My husband and I loaded up on "Fuck Cancer" swag for ourselves and even our newborn baby. We were ready to go.

I went into my initial surgery and my first 24 rounds of chemo with an attitude of Bring. It. ON. The warrior mentality and the battlefield analogies that accompanied it were in full force and effect. Fuck you, cancer. Prepare to DIE. 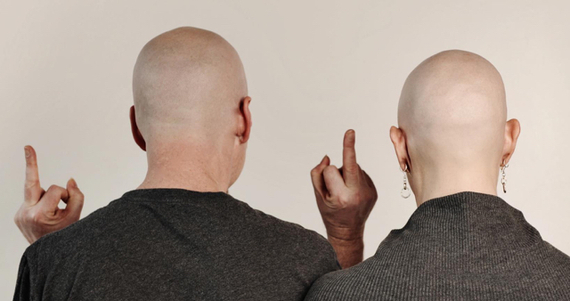 And it worked, at least during those first six months. Having in my sights a targeted "enemy" against whom I'd do battle ... it helped get me through. I was determined to beat this disease once and for all and be done with it, stronger and wiser for the experience. It's an attitude and mindset that help many through their journey with this disease or any serious challenge for that matter. I get it.

However, once I successfully completed my first, and I hoped last, round of treatment and prepared to move on with my life, I realized that the end of treatment was not the end of cancer. It was still with me. Even if my scans showed no visible evidence of the disease, I knew I had been forever changed by it. It would always be a part of me.

A year after my initial diagnosis, some questionable spots showed up on my quarterly scans. Initially tiny, we watched the spots slowly grow for several months, as my tumor markers began to creep upward along with them. By the end of that year, my oncologist felt certain enough to say I was having a recurrence. The cancer was back. Or at least it was now large enough to see and diagnose. The truth is, it was never really fully gone.

I re-entered treatment determined to once again do battle and "beat" this disease, but I was not as confident the second time around. Realizing my disease was resilient enough to bounce back so soon after treatment was sobering. I felt more wary of this opponent with whom I was doing battle. I had more respect for it.

Five months into my second go-round with treatment, new disease cropped up, this time in my lymph nodes. This was serious. It meant my cancer had become platinum resistant, and was morphing and growing despite the fact that I was still actively in treatment. The battle warrior inside me was shaken to say the least.

A couple months later, after exploring all of my options, I began a clinical trial, my third attempt to knock back the disease inside my body. But this time I approached treatment from a different mindset. This was not a battle, nor was the disease something I would ever truly conquer. No, cancer was something I would live with for the rest of my life. It was -- it is -- part of me. So how could I hate it? Practicing self-compassion means loving every part of me ... even those cells that go off the rails. I had to make peace with myself, which included making peace with cancer.

Hey, if we're going to have to live together, we might as well try and get along, right?

Instead of cursing the drugs with which I was being infused because of their difficult side effects, I thanked them. I kissed the IV bag of bright red disease-killing medication as it was infused into my veins, and whispered "thank you" to the little green and black capsules of experimental medication before I put them into my mouth and swallowed them. Thank you for keeping me healthy. Thank you for keeping me well.

I sent out into the universe a silent prayer of gratitude every time I boarded a plane to travel for treatment, and every time I landed back on home soil. I still practice these rituals, and I'm careful about the words I use, even to myself. The body hears what the mind says. Language is powerful, even if it's only our inner dialogue. Especially if it's our inner dialogue.

There is something peaceful about accepting one's circumstances. Not the things I can change, but the things I can't. I can't change the fact that I inherited a gene mutation that greatly increased my odds of getting cancer in my lifetime. I did, just like my father before me and possibly my daughter after me. And there's nothing I can do about the fact that my disease is resistant to most traditional types of treatment. It just is. There's nothing I can do about the fact that, short of a cure, my disease will, in all likelihood, continue to recur. I've been told that it will. I have no choice but to face these realities.

But acceptance doesn't mean giving up. It just means I have come to terms with my circumstances and recalculate ... just as my GPS does when I take a route other than the one initially anticipated.

So what can I do? I can take the best possible care of myself. I can continue to educate myself on all current methods of treatment as well as those on the horizon. I can avail myself of the most promising treatment options available, and supplement that treatment with whatever safe holistic remedies make me feel well. I can be grateful for each moment, and make the most of every day I'm given. I can make plans for the future, and look forward to them with joyful anticipation. I can treasure the time with my daughter and husband and loved ones, and be fully present when I'm with them. I can pay it forward, helping others cope with the disease just as I was helped.

Having done it both ways now, "fighting" disease with a battlefield mentality vs. dealing with disease from a place of knowledge and gratitude, I can say that, for me, the latter is a much more peaceful, joyful way to live. This doesn't mean I'm not a fighter. I am. Until my last breath I'll continue to pursue the best treatment options, going wherever I have to go, doing whatever I have to do to get them. But I'll do it with love, for myself and my family, grateful for the opportunity.

And cursing cancer or anything else, particularly something powerful and dangerous? Why poke the bear? Why muster inside me that kind of anger or negativity?

For me, cancer is a chronic illness. I'll treat it wholeheartedly each time it flares up, and do whatever I can between occurrences to keep the disease at bay for as long as possible. And I'll live my life with joy and gratitude in the meantime. Because peace is less stressful and more sustainable than war, and love is more powerful than hate. Always.