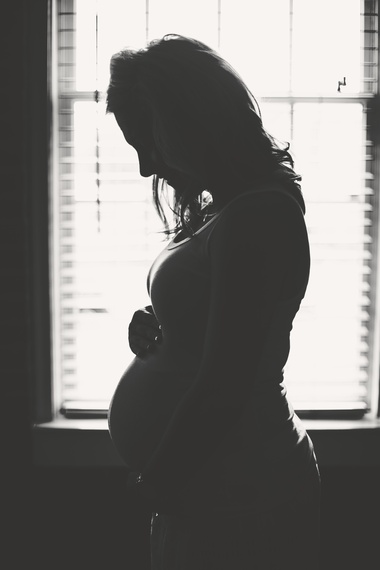 When I was a child, I remember sticking out my belly to see what I would look like when I was pregnant. Pretend-time with friends often included a ball under a shirt to play the part of the "pregnant mom." But when I actually became pregnant 11 years ago, I was self-conscious about the burgeoning "bump" and the possibility that people would notice it before I was ready to announce to friends and family that we were expecting a baby.

As the bump grew, I reveled in the attention I received, the knowing smiles from older women and even the random strangers that wanted to touch my belly. I realized that for many, pregnancy represents a joyous and exhilarating time of discovery, growth and transition on many levels, even between strangers.

What I did not anticipate, however, was that six weeks AFTER my baby was born, people would still ask me "when are you due?" Ouch! Give a girl a break -- my uterus hadn't even had time to return to its original size yet. I had always known about the "post-bump" phenomenon and even as a young adult, I could spot a woman who had given birth pretty easily. But after my daughter was born, I balked when my mom gave me the book, How To Lose Your Mummy Tummy. As I had always had a rather slim belly, I didn't expect it to be an issue for me.

Not only was I dead wrong but sadly, I discovered that -- despite heroic dieting efforts and diligent core strengthening exercises -- the bump apparently was here to stay. This was only compounded when I got pregnant for the second and third time. In fact, I began showing with the third baby as soon as I saw the double line on the pee stick. Just joking! (Not really.)

At one point during what I'll call the "desperate years", I even consulted a plastic surgeon to see if I had a common condition called diastasis, where the muscles in the lower abdomen separate during pregnancy and fail to close back after the birth, causing a pouching effect in the tummy. "Nope", the MD said. "Your muscles are perfect and solid and in the right place, with just some extra skin and fat on top." Oh ok, doc, gotcha. Thanks...

The frequent comments of "how far along are you?" and "wow! Are you going to have another baby?" caused me great consternation -- to the point that I wanted to walk around with a sign saying "No, I'm not pregnant, just bloated and a bit overweight, but thanks!" Personally, I would never ask anyone that question unless I was 200% sure she was pregnant -- e.g. seeing their water break in front of me or the baby crowning -- but alas, many others do not seem to have the same level of sensitivity in this area. I've come to accept that and I don't begrudge their curiosity and attempts at friendliness.

Just recently, I've decided to take another approach. No, I didn't quadruple my efforts to un-do the bump via diet and exercise, nor did I choose surgery. Instead, I decided to regard it as a COMPLIMENT when someone thinks that I look pregnant. That's because (1) I must be glowing and (2) I must still look young enough for people to assume that I can get pregnant. Woo hoo! Young, nubile, fertile and glowing! Just what a 42-year-old woman wants to hear!

Jennifer Garner, the actress, recently appeared on a talk show and responded to the tabloid rumors that she is pregnant and has an obvious baby bump. Her response was priceless.

Jenny is the founder and owner of Jenny Eden Coaching - a coaching practice devoted to help men, women and teens create a more healthy and sustainable relationship with food and their body image. She is an Eating Psychology Coach, a mindful eating instructor and health and wellness blogger. She specializes in kind and gentle weight loss, unique binge eating cessation techniques and mindful eating practices.

More:
MotherhoodParentsPregnancyweightBody Image
Newsletter Sign Up
Raise the kind of person you'd like to know
Subscribe to our parenting newsletter.
Successfully Subscribed!
Realness delivered to your inbox