On December 16, 2015, the National Council of Asian Pacific Americans held a rally to declare that opposing anti-Muslim hate and xenophobia will be one of our highest priorities.

Many Asian American leaders spoke out to condemn anti-Muslim hate and to demonstrate that Asian Americans and Pacific Islanders stand for and with our Muslim, Sikh, Arab, and South Asian American brothers and sisters, in part because we have been here before.

As I thought about what I would say, I realized that I oppose anti-Muslim hate not only as an Asian American, but really, with every part of my identity.

These are my remarks. 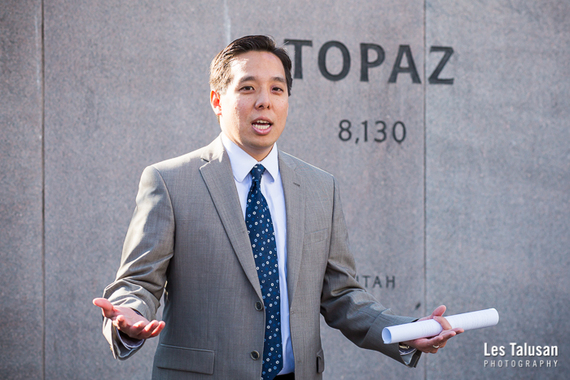 Why are we here?

We are here to stand against anti-Muslim hate.

I've just heard it again, that this is an effort to be politically correct.

Nothing can be further from the truth.

There's no such thing as a micro aggression. These are major aggressions.

But I also think it's important to step back and look at the breadth and the range of attacks and hate--and the acts of violence and hate--that have been perpetrated against the Muslim American community over just the past month.

South Asian Americans Leading Together and Muslim Advocates have compiled some of these acts of violence. These aren't all of them, I'm sure, but these are the ones that have been publicly reported so far.

If you will bear with me, because there are 49 since just the Paris attacks last month, I think it is important to share them with you:

I know it was as difficult to hear these acts of hate as it was to read them, but this is why we are here: 49 anti-Muslim attacks in just 30 days since the terrorist attacks in Paris. These are the ones that have been reported and compiled. Surely, there are more.

[Note: This list is compiled by Muslim Advocates, and just in the hours following this speech, 7 more incidents were added.]

We are here today, in solidarity, as Asian Pacific Americans, and I oppose anti-Muslim hate as an Asian American.

Asian Americans have been here before:

We know what it is like to be excluded.

To be met with suspicion, prejudice and discrimination.

To have our loyalty questioned without reason and to have our civil liberties stripped without due process.

So we stand against anti-Muslim hate because we will not allow our Muslim, Sikh, Arab, and South Asian American brothers and sisters to stand alone.

But I don't just oppose anti-Muslim hate as an Asian American.

I oppose it with every fiber of my being and every part of my identity.

I oppose anti-Muslim hate as a person of color--part of the new American majority--who will not allow our communities of color to be divided or discriminated against.

I oppose anti-Muslim hate as a feminist, who stands for equality between men and women and who understands that when racism and religious discrimination collide with sexism, the impact is even more devastating.

I oppose anti-Muslim hate as a Christian, who learned in Sunday school to love my neighbor as myself and to do unto others as I would have them do unto me. Who strives for justice and equality because whatever I do for one of the least of my brothers and sisters, I do for Christ. And I will not allow my religion to be used as a weapon or a wedge.

I oppose anti-Muslim hate as the son of immigrants, who respects and honors the sacrifices my parents made for my family and who wants to ensure that this nation does the same for all immigrants.

I oppose anti-Muslim hate as a father, who teaches his young daughter every day the difference between right and wrong. Love and hate. And to stand up for what's right.

I oppose anti-Muslim hate as an American. One who believes that the Land of Opportunity, the American Dream, and Liberty and Justice for All are real values and principles, not meaningless clichés.

The National Council of Asian Pacific Americans stands today for and with our Muslim, Sikh, Arab, and South Asian American brothers and sisters.

We will oppose anti-Muslim hate within our community--whether it is the Asian American Pacific Islander community, our local community, or our American community.

We will oppose discriminatory policies that seek to divide us based on race, ethnicity, national origin, or religion.

We know that there are many pressing priorities and concerns facing the Asian American Pacific Islander community today, but we stand united--with our voices, our support, and our solidarity--to declare that opposing anti-Muslim hate, xenophobia, and bigotry will be one of the highest priorities for NCAPA and to declare that today's rally is just the beginning of that effort.