I've just experienced the most incredible weekend at the Living Beyond Breast Cancer Ninth Annual Conference for Women Living with Metastatic Breast Cancer. Incredible isn't a strong enough word. I met the most amazing group of women-sisters living the same life as me, filled with treatments and fear and hope and loss. We laughed so hard, and bravely fought back tears, and hugged so much. So much. As we had to say goodbye at the close of the conference, I found myself hugging the same friends goodbye over and over again, not wanting to let go of them.

When it was over, and I got the airport, I checked in for my flight, and then went into a restroom, where I sat down in a stall and cried my eyes out. All the emotions of the weekend washed over me like a wave, but the biggest feeling came from knowing that I may never see these women again. I love them, and I don't want them to die, but there is no cure for metastastic breast cancer. And so I know that next year, some of them won't be back to the conference. And it won't be because their lives are too full. It will be because their lives were too short.

On Saturday night, a group of us sat in a bar eating our dinner and drinking our whiskey, and we talked about how frustrated -- no, how angry -- we are about what metastatic breast cancer is doing to us, to each other. And someone said "108 of us die every day in this country." And as we talked, we realized that we felt compelled to express that anger and frustration in a visible and powerful way. We needed to take that energy and do something with it, not someday, but right now.

By the time we came up with this plan, it was pretty late at night. I stayed up even later drafting a eulogy for the 108 of us, as the the song "La Vie Boheme" from Rent ran through my head. Meanwhile, the amazing Jennie Grimes spoke to the conference organizers, who said "Wow, great idea!" instead of "Uhhhh... you want to do WHAT?!?!" and helped us figure out the logistics to make it work. LBBC staff: You guys are INCREDIBLE. The support you showed us, and the way you partnered with us to allow us to express ourselves... it was so powerful. I hope you know just how special you are.

And so, at 10:45 yesterday morning, we lay on the floor of a hotel in Philadelphia, and held hands with each other, and I wept while my college BFF read the eulogy for us. She said, "Dearly beloved, we are gathered here to say our goodbyes to the 108 Americans who will die of metastatic breast cancer TODAY, and EVERY day, because there is no cure for our disease. They are our friends, our mothers, our daughters, our sisters, and they deserve better. They deserve a cure, and we honor their memory by DEMANDING IT, not someday, but NOW. And now, let's have a moment of silence for those 108 women and men who are no longer with us."

This is what we looked like. Sometimes there are just no words. 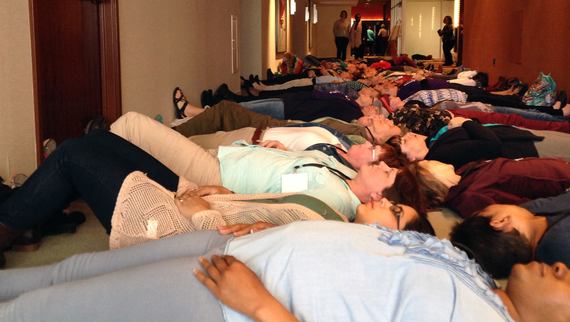 That afternoon, I went to the airport, where I read the news that one of those 108 was HuffPost blogger Seporah Raizer. Her final tweet was from Simon and Garfunkel's "The Boxer":

"I am leaving I am leaving but the fighter still remains." Her words were so beautiful and so powerful, and now there will be no more of them.

I don't want to watch any more of us die. I don't want people to be afraid to love my mets sisters deeply, because of the pain they will feel when we're gone. I don't want 108 women to die today, and tomorrow, and every single day, of metastastic breast cancer. I want a cure. I want all of us to live. I want our voices to be heard. I want our words to live on, not just in memory, but because we are still shouting them to the rooftops.

If you're interested in organizing a die-in in your community, I'd be happy to speak with you about what we learned from this experience. Just drop me a line at cultofperfectmotherhood@gmail.com.