Guernica for me is a modern template, just as the Madonna and Child is an ancient template. There are many templates in art, shells upon which the artist forges a vision, contributing to a shared cultural experience. Art existed long before the concept of the new -- the idea of singular vision and intellectual property. So I approach the Guernica template cognizant and reverent of its meaning and cultural significance.

It is a visual shorthand for the overwhelming and gratuitous horror of modern war. But I argue that the cultural takeaway of Guernica is actually the opposite. It transforms incomprehensible tragedy into a cartoon narrative, something we can more easily absorb. This is part of the human process, to distance ourselves from the immediacy of undiluted, overwhelming emotions by overlaying a narrative that simplifies, and in effect, takes us down from three to two dimensions. And this is the underlying concept that I grapple with in all my many versions of Guernica.

I have put my own spin on Guernica more than 50 times. I may use different characters and mirror the composition more or less faithfully in various versions, but I am always riffing on the same basic message -- that cultural bias is embedded in our narrative. My Guernicas call attention to the product placement of global corporate culture, using war as entertainment and entertainment as war. 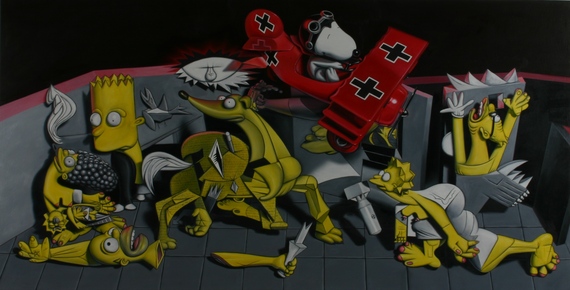 I have an arsenal of characters that I've developed over the years, and increasingly I use them as personal archetypes to color the narratives and imprint upon the templates of my art. MC Supersized is my version of Ronald MacDonald. He is what Ronald would look like if he actually ate the food that MacDonald's peddles. I consider him the western Buddha, in that our religion is consumerism and he is the over-sated consumer.

My Rabbbit represents the proletariat, as rabbits have traditionally been used in art by such people as Joseph Beuys. But mine is an alien rabbit, equipped with a third eye, yet still nervous, jittery and in the end, food for cosmic wolves. My cowgirl tends to evoke strong reactions in people, who find her funny, and more than a little disturbing. I think of her as the spokesmodel for Bovine Growth Hormone, and in her I'm exploring the connections between food and sex, the literal sustenance and the sexualization of mother's milk.

I like to stage my Guernicas from different vantage points. To these ends, I have created sets with 3D models that I can light and photograph from many angles. The studies then become the basis for paintings, and I can create several paintings from a single photoshoot by altering the figures, the composition, or the point of view. I am not done with Guernica yet. I don't believe I will ever exhaust the possibilities of the template, with its unending power to visually articulate the raging complexities of waste, destruction, horror and conquest, through its deceptively simplified narrative.