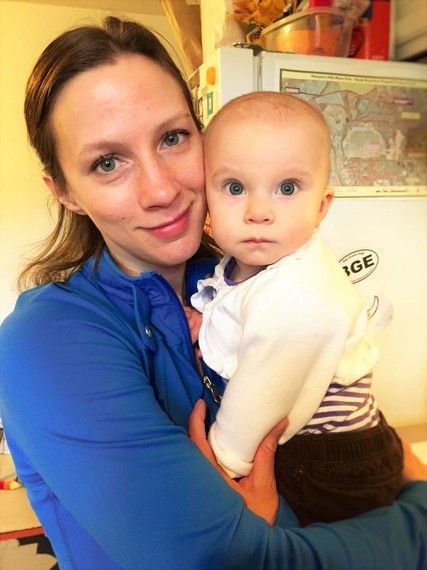 The difficulty of the world didn't hit me full-force until I was an older child.

Still young and fairly innocent, I think I was seven or eight when I realized that not all kids were very nice.

I was, maybe, 12 or 13 when I understood that some kids were downright mean.

I was 14 or 15 when I started to become resentful.

I was 17 or 18 when I realized that bitter resentment was mainly harmful to me.

I was 25 or 26 when I finally started to understand, and own, self-love.

I was 30 going on 31 when I would welcome my first child and, cliche as it is, really understand what love is.

Now, at 35 going on 36, I know just enough to suspect that it's not true when other parents tell me that the easier years wait ahead, with my children currently ages five and one.

Raising two girls is not a task that I take lightly, although it is a pleasure and a joy and something that I try to lighten up into; trying to bring a sense of easy fun into our mother-daughter relationship while also honoring the sheer importance of being a parent.

I'm writing this while the kids are playing in an adjoining room with my husband; football, snack munching and general roughhousing in the background.

My friends tell me things like more sleep lies ahead and that it will get easier and that I'll have more time for myself soon enough, but I don't believe all of this and here's why.

My children, hopefully, will grow into teenaged bodies that I wrestle to wake up in the morning instead of the current game of getting them to sleep. Still, when a woman becomes a mother, I don't think sleep is ever the same again -- a cry in the night is simply exchanged for another noise, like a door creaking open for a child to sneak out of the house.

This isn't to say that my home won't have rules, regulations and expectations, but certain things -- like sneaking out and hormonally-driven cry-fests -- are symbolic stages of adolescence, regardless of the generation, for a reason.

I take time for myself to work now -- even for brief article-writing stretches like at present -- and I will in upcoming years as well. Sure, I battle for just a half an hour to exercise or a shower without company -- and things like this will become easier, simply because of full days at school.

Just now, I had to ask my five year old to stop coming over to my elbow as I write because I'm taking a short "timeout." Will there be a point in a few years, when she won't care as much what I'm doing, because she's older with her own interests, and I am only one small part of them? I sincerely hope not, but, again, all typical signs point to "likely."

Being a parent when my kids are in high school, for example, is something that right now I can only imagine and, if my images of what early motherhood were like before actually having children are any indication, my predictions are probably way off. Regardless, I don't plan on being less of a mother because my kids are older. As kids age, that's when they need to know that we are around as listening ears and open arms.

I'm not suggesting that we all helicopter around our blossoming children, but availability should absolutely remain a constant.

So, yes, I hope that our house gets a little -- or a lot -- more sleep. I hope, even more, that my kids are so independent that they don't need me as much as I'll wish they did, but I won't for one second believe that my girls don't need a mother anymore because they have bras instead of tattered dolls.

More:
ParentsStay-At-Home Moms
Newsletter Sign Up
Raise the kind of person you'd like to know
Subscribe to our parenting newsletter.
Successfully Subscribed!
Realness delivered to your inbox