How many times have you gone over to someone's house for a playdate -- and before you're even through the door, you get, "Please excuse the mess in here. It's been a DISASTER, but I've been so busy I haven't had a chance to clean it"?

As a father of two precocious boys, I nod knowingly and walk in to find... nothing! Not only is there no mess, but the place is freaking immaculate. Floors you could eat off of, carpet freshly vacuumed, no crumbs on the couch, and not a speck of dust to be found. The throw rugs are all perfectly aligned, there's no dirty laundry draped on the banister or hanging from light fixtures, and -- wait a second, did they -- yup, someone has not only picked all the DVDs up off the floor, but also put them in alphabetical order. The family has three kids and a 90-pound Labrador, and yet this house would pass inspection from even the strictest drill sergeant our fine Armed Forces could produce.

It's like a museum; I'm immediately uncomfortable because I'm wondering if anyone has ever sat on that pristine white couch. And since there are no scuff marks or fingerprints on the walls, I start questioning if this is one of those rooms that no one is allowed in unless company is over. Then I wonder why anyone would have a room no one can go in! But mostly I'm afraid I, along with my rambunctious clan, will ruin anything we come in contact with.

Truth be told, I prefer a little mess, because it puts me at ease.

I'm not talking about hoarders or people living in their own filth; I just mean I tend to gravitate toward parents with domiciles that -- you know -- actually look like a family lives there. And it doesn't mean I automatically dislike or distrust the Mr. and Mrs. Cleans of the world, it's just... I don't get it. 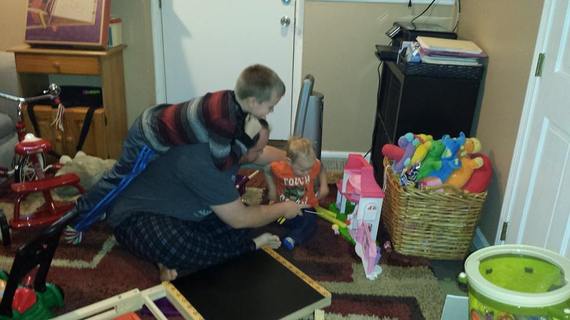 The big things I realized when I became a parent included 1) how much STUFF babies come with, and 2) how messy life gets. Even with one kid, the mess factor is incredible. Little kids pull stuff out of cabinets and off tables. They spill drinks you forgot to pick up, and smear food everywhere but their mouths. Even older kids come with problems like leaving their clothes everywhere and littering the floor with an ungodly amount of toys.

So when families have more than one kid, the mess increases exponentially. Throw in a cat or a dog, and fuhgeddaboudit.

Honestly, even a stay-at-home parent would have trouble keeping up with cleanliness on the immaculate scale. That level of squeaky clean can only be maintained by constant vigilance and an unimaginable force of will. It would have to entail either not letting your kids and dogs outside, or wiping them down each and every time they come into the house. It means you're following them around with a Dustbuster (did I just date myself??) and tailing them to put everything back into place once they've blown through like a hurricane. I just can't see any scenario in which the highest levels of cleanliness can be consistently maintained without sacrificing time to actually parent and enjoy what's happening.

Which is why I prefer a messy parent.

Messy parents understand that spills happen, and a few stains are the price of doing business. They don't follow their kids around with the vacuum; they chase them because they're playing tag or pretending to be a superhero. They know muddy footprints in the kitchen are just evidence of fun times had out in the yard (at least, they hope it's just mud). And they're OK with some pet hair on the couch, because that's where they cuddle with the dog after the kids go to bed.

Don't get me wrong -- I have my hang-ups. When Sam flings his food around, it gets to me, because I have a weird thing about dirty hands. And I cringe a little when MJ paints with the boys in the kitchen, but then I get over it because I see how much fun they're having. And I can only speak for myself, but the fun is fleeting, so we're going to enjoy it. Even if that means putting off some chores and letting the mess win for a while, it's worth it.

I'm a proud messy parent, because I believe a home is meant to be lived in and enjoyed. After all, life is messy. And messy can be a whole lot of fun.

Cute Kid Notes
More:
KidsParenting parents-dadsParentsparents-moms
Newsletter Sign Up
Raise the kind of person you'd like to know
Subscribe to our parenting newsletter.
Successfully Subscribed!
Realness delivered to your inbox