Almost a decade has passed since I commissioned drawings of the Prophet Muhammad to run in Jyllands-Posten. But despite countless op-eds and even a book that laid out my motivation for publishing the drawings, confusion and bizarre conspiracy theories continue to cause controversy about that fateful decision.

In 2006, for example, a Syrian television series portrayed me as a Ukrainian Jew with close ties to neoconservative circles in the U.S. My purpose for publishing cartoons of the Prophet Muhammad, according to the show, was to stir up conflict between the Muslim world and the West.

The echo of those cartoons still reverberates in different parts of the world. The recent attacks on cartoonists and artists in France and Denmark are just the two most recent examples.

A few days ago, a Guardian commenter wondered: "I'd like to ask Flemming Rose why he commissioned the infamous cartoons. What news story was he seeking to illustrate, or what political statement was he seeking to make?"

Well, I wasn't making any political statement. Back in 2005, I was trying to cover a story about self-censorship and fear among writers, artists, museums, publishers, comedians and other people in cultural life in Denmark and Western Europe. A children's writer had made headlines when he claimed that he had difficulties finding an illustrator for a book about the life of the Prophet Muhammad; the reason, he said, was fear. That was the starting point for a debate about self-censorship in dealing with Islam. Several other examples followed. In one example, a Danish comedian admitted he was afraid of mocking Islam the same way he did with Christianity. In another, two imams called on the Danish government to pass laws criminalizing criticism of Islam.

This last example added another dimension to the debate. What do you do when people adhering to a faith or ideology insist that others with different convictions submit themselves to taboos outside sacred places? Over the years, my answer to that challenge has been consistent. If a believer demands that I, as a nonbeliever, observe his taboos in the public domain, he is not asking for my respect, but for my submission, and that is incompatible with a liberal democracy.

The cartoons were a journalistic exercise: you hear about a problem, and you want to find out if it's true or not. We approached it according to a time-honored principle: "Don't tell, show." There were two broad questions of importance. First: Were people in cultural life in Western Europe exercising self-censorship? And second: If that was the case, was the fear based in reality, or was it just a fantasy? What should one do about it? To find out, we approached cartoonists and invited them to draw the Prophet Muhammad as they saw him.

Unfortunately, today we can say that both questions have been answered in the affirmative. Self-censorship is a fact, and the fear driving it is based in reality. We are now debating what to do about this unpleasant reality. Cartoonists and editors are being threatened, attacked and sometimes killed if they blaspheme against Islam, though one may find other religions and nationalisms pursuing similar intimidation of the public space in other parts of the world.

Over the years since I commissioned those infamous cartoons, I have had time to read insightful books, debate the issue of free speech around the world and reflect on the issues and dilemmas those cartoons raised. I've been accused of being responsible for the loss of innocent lives and labeled a Nazi who is having Muslims for breakfast. But in the end, I don't accept the blame for anything except the offense the cartoons caused to some Muslims. I have expressed my regrets about that. On the other hand, this very uncomfortable situation has forced me to consider if there really are principles at stake that I am willing to defend no matter the high cost.

I've concluded that there are, at least for me. It's about what I believe in, about the person I am, about what makes life meaningful and worth living. For me, it's important to defend the free society against the fear society. It's also crucial, I believe, to stand for the values of secular democracy.

I think there are two fundamental narratives when it comes to defending or denouncing cartoons of the Prophet Muhammad. One says that this has nothing to do with freedom of expression and democracy and that it's about a majority mocking a weak minority, about marginalizing and demonizing a group of people that already feel vulnerable. The right to freedom of speech doesn't imply an obligation to speak and insult what is sacred to other people. I won't deny that this perspective has some truth to it because a lot of Muslims in Europe do experience discrimination and feel excluded. I just don't think this is relevant for the debate about cartoons targeting a religious doctrine.

The other narrative insists that religious satire and the right to ridicule and mock religion and other ideas is an inseparable part of life in a democracy, that in a democracy nobody has a right to impose its taboos on society at large. And when that happens, it's important to confront it and have a debate because it violates the secular order, the separation of state and church. As a consequence, the Muhammad cartoons are not just about satire; they're about one of the fundamental pillars of a democracy.

In that sense, the cartoons serve as an act of recognition of Muslims as equal citizens in Western democracies. They stress the point that a secular democracy doesn't ask more of Muslims and it doesn't ask less. It asks of Muslims exactly the same as of any other group in society. Muslims aren't strangers or guests; they are here to stay. The Muhammad cartoons are in fact more innocuous than what's been done to the symbols of Christianity.

After the killings in Paris and Copenhagen and after a hopefully growing understanding that the primary victims of Islamist extremists are individual Muslims who are prevented from exercising their rights, it seems to me that the former narrative has been more difficult to sustain. It doesn't square with the fact that powerful and influential media in the West have subjected themselves to an unwritten blasphemy law.

It's also clearer that the minority/majority narrative isn't easy to apply in a consistent way in a borderless and digital world where everybody lives different identities depending on the circumstances. A Muslim can belong to a minority in one place but be the one who decides what is right and wrong in another.

Some Muslims have been very clear that they don't feel offended as members of a marginalized minority. It made a huge impression on me when I read the testimony in court by Mohammad Bouyeri, the young Islamist extremist who in 2004 killed the Dutch filmmaker Theo van Gogh. Speaking to van Gogh's mother, Bouyeri said:

You should know that I acted out of my own conviction and not because I hated your son for being Dutch or for having offended me as a Moroccan. I never felt offended. And I did not know your son. I cannot accuse him of being a hypocrite. I know he was not, and I know he was true to his own personal conviction. So the whole story about me feeling offended as a Moroccan or because he had insulted me is nonsense. I acted on the basis of my belief. What is more, I said that I would have done exactly the same thing if it had been my own father or brother.

It's clear that Islam has a problem with blasphemy and apostasy. Even though the majority of Muslims denounce terrorism and killing in the name of religion, blasphemy -- the crime of Theo van Gogh, Lars Vilks, Kurt Westergaard and the cartoonists at Charlie Hebdo -- and apostasy -- the crime of Ayaan Hirsi Ali and Salman Rushdie -- are perceived by hundreds of millions of Muslims as capital offenses that deserve the harshest punishment.

Though, in the words of the Turkish author and philosopher Mustafa Akyol, there is nothing in the Quran that decrees earthly punishment for blasphemy or for apostasy. "Severe punishments for blasphemy and apostasy appeared when increasingly despotic Muslim empires needed to find a religious justification to eliminate political opponents," he wrote in a recent op-ed in the New York Times.

A former radical Islamist of Egyptian background recently made the point that Muslims should see the Charlie Hebdo cartoons as a gift -- as an opportunity to laugh at themselves. He explained his shock the first time a co-student, who was Catholic, told an obscene joke about the Virgin Mary. He broke ties with him. Only years later did he recognize the importance of satire for a healthy society. He understood that the Catholic had been able to laugh at his religion because he was free from a coercive and dogmatic way of practicing his faith.

"Only freedom," he wrote, "makes it possible at one and the same time to keep one's faith and create a certain distance that gives room for self-criticism and satire."

This former radical Muslim now sees Muhammad cartoons as an opportunity for Muslims to put an end to the taboo against criticism of their Prophet. It may pave the way for a more adequate response to apostasy and blasphemy.

Flemming Rose
Foreign Editor, Jyllands-Posten and author of “The Tyranny of Silence" 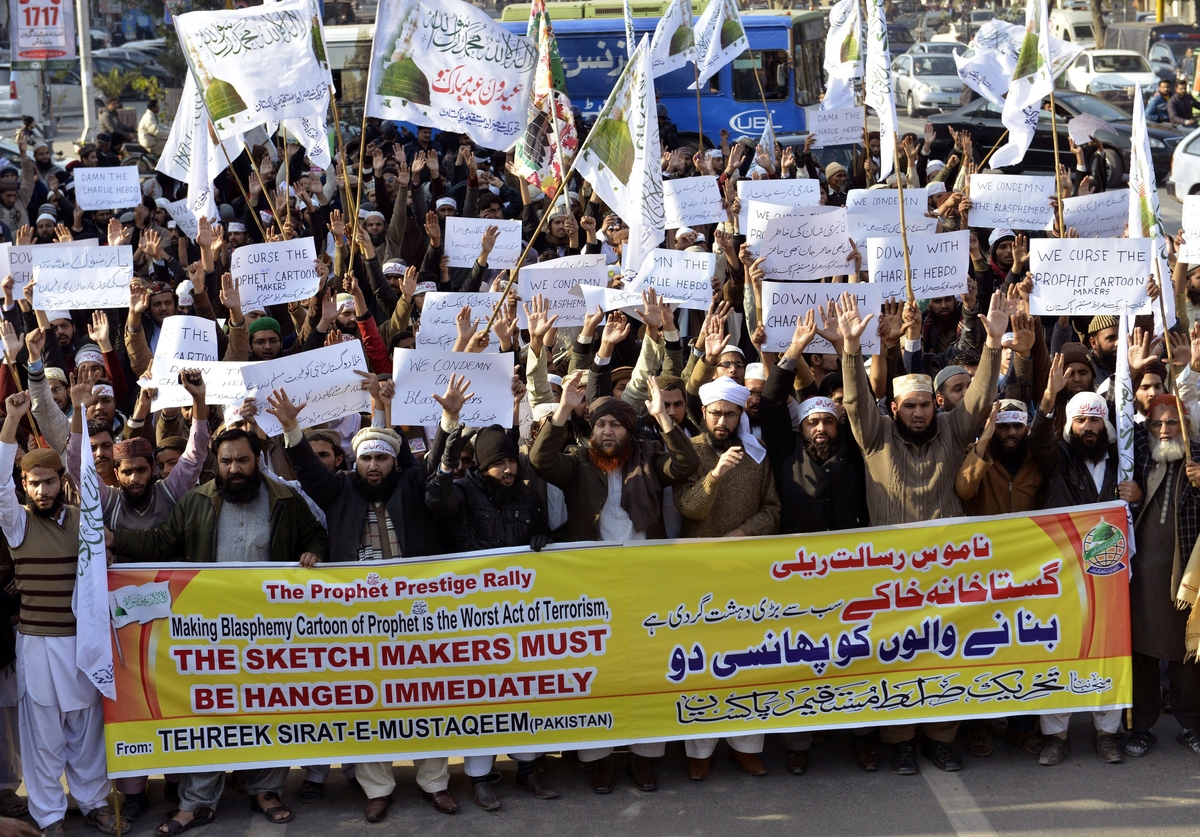