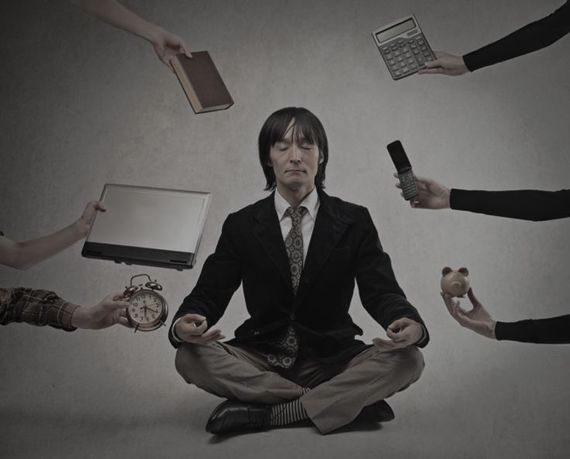 The data is now telling us multitasking is not only ruining our relationships, but also our brains. Distraction is literally bringing us down.

For the record, I'm all about being more effective, which is why I originally started multitasking. I thought I'd be able to do more with less, that -- like a net -- it would catch all my straying "fish," the priorities in my life. And it (kind of) did with the small stuff--like "working" on my laptop while watching TV. But when it came to anything that required real brain power, multitasking fell way short. And I couldn't completely shake the habit, and didn't know what to do about it.

Until I saw something that changed me.

I was watching my 5-year-old son Austin at his flag football game the other day. He's still learning, and gets distracted easily. Austin kept watching cloud formations, running to the sidelines insisting that I buy him candy, and half-listening to his coach while playing tag with his teammates. I pulled him out of the game and told him he needed to get focused.

Then Austin did something unexpected that amazed all of us. He sat down on the field, closed his eyes, and struck a yoga pose -- cross-legged with hands on his knees, in the half lotus. I was in shock -- my wife and I do some yoga, but we'd never taught him to do that, especially during a football game! He sat for a few minutes, and just as I was about to shout out for him to get up, he jumped to his feet, bolted full speed into defense mode, chased down his opponent and pulled his flag, preventing a touchdown. Before the next play, he sat down and struck the same pose again. And he got up and defended against another touchdown run! When his team got on offense, he grabbed the ball and ran straight into the end zone for a touchdown. I was speechless.

Watching my son sitting in his yoga pose and then transforming his performance was my big 'aha' moment. He inspired me. I had tried everything I could think of to stop multitasking, and here was a 5-year-old simply doing it. This is what I learned from him:

Stop All the Noise

There's so much going on in our lives all the time, so many things pulling at us that it's hard to even notice how truly noisy it is. For us to move forward, we've got to admit the reality: We're surrounded by a bunch of stuff that isn't always there to help us. And by trying to embrace all of it at the same time by multitasking, our lives have become unmanageable.

We live in a world that pushes us to go faster, do more and make more happen in less time. So instead of going deeper in relationships and tasks, we're tempted to stay at the surface and skip over the waters of life, losing opportunities that make life meaningful. Have you ever gotten to the end of the day only to wonder how it was any different from the day before? How often have you finished a meeting and couldn't remember what took place or if it had any impact at all? We're moving too fast. We love the fast forward button, but we really need the pause button way more often. Part of slowing down is that we realize we need to get to a higher place than we are.

Get Completely in the Moment

Life is meant to be lived to the fullest -- at home, at work and at play. Technology can be great, but it can also get in the way if we let it. It can distract you from the people you love, leave you clueless in meetings or make you into a person who appears to care less about what's happening. The worst is it can rob you of opportunities to connect with others. It's not just technology, either. There are countless distractions. So we need to choose to be completely in the moment. We must elevate ourselves to a higher level and change for good by focusing, simplifying, and staying present.

We can all apply this approach in our lives, and it'll work. We'll make strides in dumping multitasking for good, and become the powerful people we've always wanted to be.